Good to know that perseverance rover has touched the surface of Mars finally. We will have nice new opportunity window for exploring our closest "friendly" planet of solar system. Here's one of Mars photos perseverance has made : 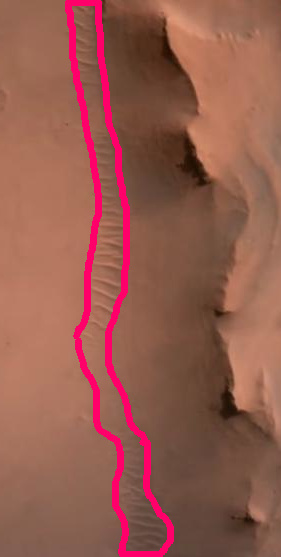 Question is, What are this object roots marked with rose color ? I suspect it can be remains of past river in Mars or is it just an artifact of wind+sierra effect ?

The image in question appears to come down from the rover "down-look" camera. Here is a raw image of that, while this is a raw image taken next to it (you can line up the crater part in the left of the first with the main crater in the second).

While both list Sol 4 as the acquisition date, they list Feb. 23 and Feb. 24 as the Earth dates, while local time is separated by just 14–15 minutes. Despite those dates, which seem pretty incompatible to me, I have a feeling that that's when the images were downlinked to Earth from the rover. The "down-look" camera is "mounted beneath the rover, looking downward at the surface during landing." And, those do not look like images of the surface to me that I would expect if you were just a few inches away, instead they look like meter-scale pixels, not millimeter-scale pixels. So, I think these were images taken while it was landing, a few minutes apart.

With that knowledge, those are sand ripples, which are basically small dunes. These are all over Mars, so it's nothing unusual and does not have anything to do with it being near or in a lakebed, but just have to do with the wind and particle size of the martian regolith.

Not the answer you're looking for? Browse other questions tagged solar-system mars planetary-formation or ask your own question.

9
Asteroids between Mars and Jupiter
6
Strange square-like formation on Mars
4
What would a terraformed Mars look like from Earth?
3
Is the dot on the photo - Mars?
4
Mars looks like a blur
4
I need help getting mars to look like a circle
3
Would drinking melted ice water from Mars taste like sparkling water?
11
Are there Earth rocks on Mars?
6
Is the Object in this Photo Mars?
22
Please check my Mars photo