Rotation of far away and near by galaxies

Do the far galaxies rotate the same as does the milky way and the near by galaxies?

It depends a bit on what you means by "far away" and "the same", but:

Galaxies form from collapsing and colliding clouds of gas and dark matter in the early Universe. The first structures began to form a few hundred million years after the Big Bang, with masses of the order of $10^5$ Solar masses (e.g. Mo et al. 2010). As time went, progressively larger structures built up in a hierarchical manner from smaller clumps, with more galaxies forming as time went, until galaxy formation peaked around 2–3 billion years after the Big Bang (e.g. Thomas et al. 2017).

Because the Universe expands, everything was closer in the early Universe. Hence, early galaxies formed under constant harassment by other galaxies coming from all sides. This made it difficult for galaxies to settle into an ordered, rotating disk. Indeed, some galaxies in these early epochs had all their gas blown out by merging with other galaxies and feedback from supernovae and quasar activity. Without gas it is difficult to settle into a disk, and to form new stars. These galaxies are seen today as elliptical galaxies without an overall rotation (e.g. De Lucia et al. 2006).

When did rotating disks form?

Galaxies that survived such a bombardement eventually tended to form a rotating disk. So when did galaxies start to rotate? This question is still not entirely resolved. Galaxies don't just suddenly start rotating, but rather progress from being dispersion-dominated (i.e. stars and gas follow randomly oriented orbits) to being rotation-dominated.

Previously, it was thought that (most) galaxy formation took place in a "hot mode", where accreting gas from the intergalactic medium is shock-heated to high temperatures ($T\sim10^6\,\mathrm{K}$), eventually "drizzling" down on the central galaxy (e.g. Rees & Ostriker 1977; Fall & Efstathiou). Consequently, disks would form quite late in the history of the Universe (at redshifts $z\lesssim1$, some 6 billion years after the Big Bang).

However, partly due to numerical simulations it was eventually realized that galaxies could accrete gas through cold, narrow streams of gas which reach the central galaxy faster, and is cold enough to form stars (e.g. Dekel & Birnboim 2006; Dekel et al. 2009). These streams also carry angular momentum which aid the rotation.

Simulations now routinely see rotating disks forming already ~1 billion year after the Big Bang (e.g. Grand et al. 2017; Pillepich et al. 2019). Observationally, disks at these high redshifts are detected (primarily I think) through carbon and carbon monoxide with large radio telescopes (e.g. ALMA), and rotation-dominated disks have been detected out to redshifts of at least $z=4.55$, corresponding to 1.3 billion years after the Big Bang (Fujimoto et al. (2020). The distance to this galaxy is 25 billion lightyears. I think the "record" for seeing rotation is Smit et al. (2018) at redshift $z=6.8$, seen only 800 million years after the Big Bang, at a distance of 28 billion lightyears, though its rotation is perhaps a bit up to interpretation.

A very recent (yet non-refereed) study by Kretschmer et al. (2021) find galaxies 1.8 billion years after the Big Bang to be rotation-dominated for several orbital periods, before being disrupted by mergers and counter-rotating streams.

Although these galaxies are not as evolved as the Milky Way, some of them already show not only rotation, but also sign of spiral structure. So I'd say that the answer to your question is "Yes, for the last 90% of the history of the Universe, some galaxies do, although most early galaxies don't."

In 2-dimensions it is easy to compare the rotation direction of two systems. They can either rotate clockwise or counter-clockwise. In three dimensions, spin direction can better be described by the pointing direction of the spin axis or angular momentum vector (normal to the galactic plane). 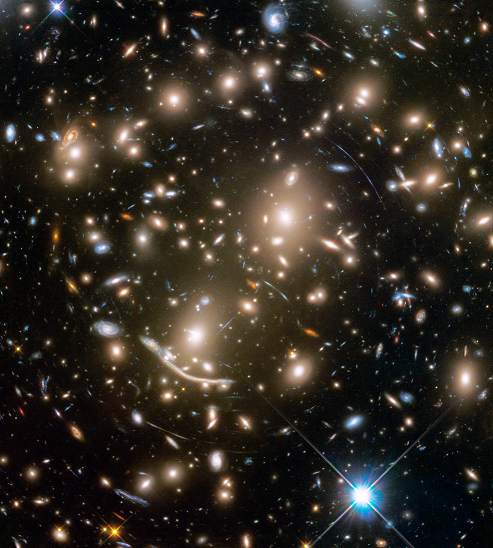 From looking at the above image, one could imagine that the distribution of spin direction of galaxies was uniform random (or isotropic). However, Godlowski et al. in their paper: The Orientation of Galaxies in Galaxy Clusters show that galactic orientations within a galaxy cluster exhibit anisotropies.

Here is a figure from their paper. The middle and rightmost columns are the angles equivalent to the pointing direction of the distribution of galactic orientations within each galaxy cluster. We can see they aren't quite as expected from a uniform random distribution.

Not the answer you're looking for? Browse other questions tagged galaxy time observable-universe or ask your own question.

10
If galaxies are moving away from each other then why are the Milky Way and Andromeda galaxy coming towards each other?
4
Acceleration in Galaxies Collision
10
What percentage of galaxies rotate with trailing arms?
4
Does the milky way have relativistic mass against galaxies which are moving away from it at high speeds?
43
How do we have photos of galaxies so far away?
13
Does the rotation of galaxies precess?
1
What are the smallest star clusters affected by Galaxy Rotation Curve?
18
How are constellations intact if the stars are rotating around galactic nuclei?