Does a meteor's direction change between country or latitude?

So here is the question me and a friend of mine from Norway we saw a meteor but que said he saw it in the opposite direction as me and I was looking from spain, does that make any sense? Or we should see it going the same direction? Thanks in advance

If you see the same meteor, it of course only has one path - even while the apparent movement differs for different observers. What you basically do in that case is triangulation - which you could use with your known geographic location (and time for the observations, and the direction horizontally and vertically) reconstruct the flight path. That's a method which actually is used to identify meteors and and tracking them, e.g. via the fireball network.

Is it possible that you saw the meteor given your geographic separation? (note 11 March: This paragraph is heavily revised and comes to the opposite conclusion with the right trigonometry)

Given the mentioned separation between Norway and Spain, we talk of a few thousand kilometres. The typical height at which you see a meteor is between 50 and 100km. The curvature of Earth then makes sure you don't see the same meteor when you are too far apart - but it might be still just right here:

Madrid and Oslo are about 2000km apart, the Earth's circumference is about 40000km. The earth's radius is $r_E = 6371$km which allows us to calculate the angle $\alpha$ between those as seen from Earth's centre: $\alpha = 0.31$ (radians). With that angle we can calculate the height an object must be at when we look horizontally and just see it at the horizon (laying on the floor makes it easy to calculate), given it's separated by the angle $\alpha$: 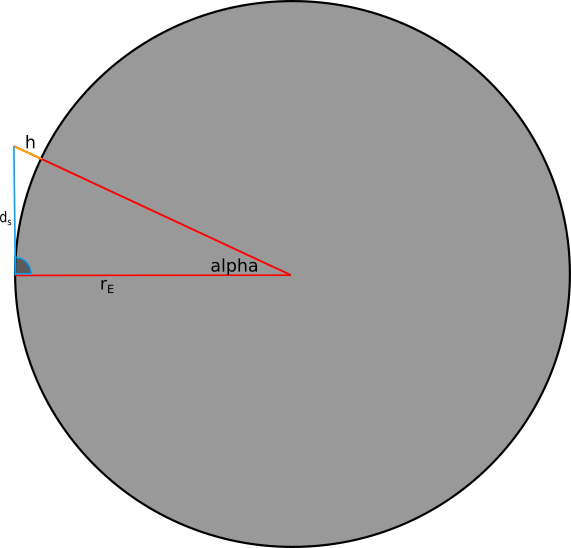 $$ d_s = r_E\cdot tan\alpha $$ and $$ \frac{h+r_e}{\sin 90°} = \frac{d_s}{\sin\alpha} = \frac{r_e\tan\alpha}{\sin\alpha} = \frac{r_E}{\cos\alpha} = r_E \sec\alpha $$ so that $$ h = \frac{r_E}{\cos\alpha}-r_E $$ Now if you enter the angle between Oslo and Madrid you get a height of about 79km for an object passing half-way (thus at half the angle to each). So it might have been that very same meteor if it was very close to the local horizon. Given that this estimation is pessimistic as it ignores observer height, things get a bit better if you assume that you stand on your feet, on a building or even a mountain. Either way, the meteor will have been close to the horizon for both of you, and very likely for one travelling left to right, for the other observer right to left.

Yes, but it depends on your reference system. If the meteor was moving East to West over England, it would appear to be going Left to Right from Norway, but Right to Left from Spain.

The river, or meteor, has not itself changed direction, but you'll each describe the direction differently if you're using spatial reference systems relative to yourself.

No, they do not change direction when they pass over country borders or latitude. It is just based on where your positions are relative to the meteor.

1
Does meteor direction change if you look from a different country?

2
What did I see streaking across the sky last night?
1
Does this video catch an Eta Aquarid - Earth skimming meteor?
3
Why are these objects moving at Vastly Different Speeds along the same orbit?
7
Did I see a mentionable event in Germany early morning on 6th of February 2019?
10
Where is the Perseids meteor shower coming from?