A new image of deep space was released yesterday, showing tons of galaxies. One in particular (named "LEDA 14884") looks very puzzling (like an ear), zoomed in below: 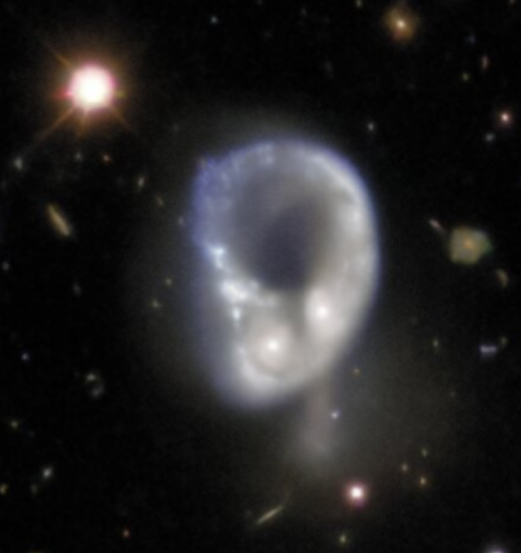 Article says it's a ring-shaped galaxy. Is there a more precise characterisation in terms of well-known galaxy typologies (irregular perhaps)? Perhaps the angle is confusing it's otherwise usual shape?

This is almost certainly an example of a collisional ring galaxy. It's listed as such (under the alternate name AM 0417-391) in the catalog of Madore et al. 2009; here is a panel showing the galaxy from one of their figures: 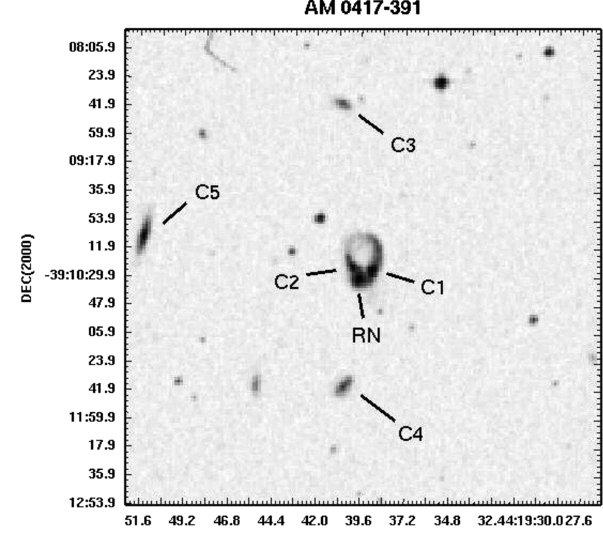 These are thought to be the result of a smaller galaxy colliding more or less head-on with a larger disk galaxy. The smaller galaxy passes through (so these are sometimes called "drop through" collisions), but leaves behind a pronounced "ripple" in the gas, which becomes concentrated in an expanding ring and forms stars at a high rate; this shows up as a ring of gas and bright, young stars. Since most such collisions will be off-center (i.e., the smaller galaxy won't pass through the exact center of the bigger galaxy), the ring will be asymmetric, as is clearly the case for LEDA 14884.

These are very rare systems; Madore et al. (2009) quote an estimated frequency of 0.01% of galaxies in the local universe being collisional ring galaxies.

Not the answer you're looking for? Browse other questions tagged galaxy identify-this-object or ask your own question.

5
What if our galaxy didn't have a SMBH?
3
What is a Seyfert galaxy?
7
What is at the edge of the galaxy?
1
What factors determines the size of a galaxy?
0
Is there a name for this type of orbit of a natural satellite?
4
What is the farthest blueshifted object to our galaxy?
5
What decides the shape of a galaxy?
2
Elliptical galaxy morphology
3
What's so interesting about Coma-type galaxy clusters?
2
What is the closest galaxy?