What's the map on Sheldon & Leonard's refrigerator of?

In the Big Bang Theory, there's a map on Sheldon & Leonard's refrigerator throughout the entire show It has false-color shadings of various kinds, with prominent craters, and so is presumably of some non-terrestrial body, perhaps Mars, the moon, or an asteroid. Can anyone identify it? 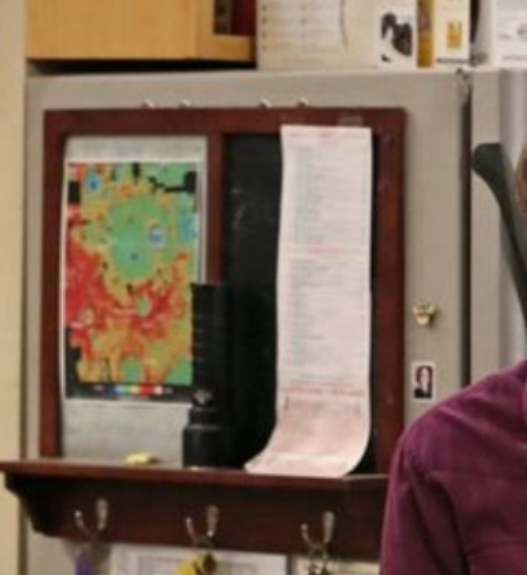 It's the Beethoven basin region on Mercury. The MESSENGER image gallery says:

A digital terrain model (DTM) derived from Mercury Dual Imaging System (MDIS) stereo images. The lateral spacing is 330 m and the map is in stereographic (conformal) projection. The image is taken from abstract number 1913 submitted to the 2012 Lunar and Planetary Science Conference, by Frank Preusker and colleagues. 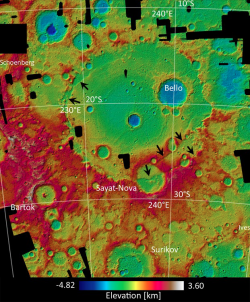 A collage of MESSENGER photos from 2011 debuted on the Apt. 4A freezer door around the same time. A statement released 2012-04-05 quotes PI Sean Solomon:

The MESSENGER team is thrilled by the decision of the producers and writers of 'The Big Bang Theory' to weave some of the spacecraft's latest images of Mercury into this week's episode... We look forward to seeing how the images figure in the story line and camera shots, and we hope that interest in the MESSENGER mission is broadened by this exposure on one of the most popular series now on television.

Not the answer you're looking for? Browse other questions tagged topographic-map or ask your own question.

4
Why is the Moon smooth near the equator and bumpy near the poles?
2
How can I find the depth of a portion of the Valles Marineris?
14
Looking for a detailed Milky Way map