How to measure mass of planets' core from orbit

I am told in an astrophysics lecture the following.

The mass of Saturn's core was measured by Cassini when it completed its final flyby between the rings and the planet itself. It was also found that its core has a sharp boundary.

Juno measured the mass of Jupiter's core & found that its boundary is a bit fuzzy.

How were these measurements done in principle?

(Ie what was measured from which we can deduce core mass?)

I certainly don't know the details of these kinds of calculations, but as my thought is a bit too long for a comment I'll write it up as an answer.

If you measure the flattening of a planet due to rotation (e.g. by measuring its rotation period) and the gravity (measured while keeping the orbiter at constant height above the planet), then you have everything you need to calculate the moment of inertia I/(MR2) using Radau's approximation (not the most informative link, but I couldn't find a better one). After that, it's a matter of taking a model for a planet, e.g. a two-layer model with a core and a mantle, which has free parameters x, the fractional core radius, and f the difference in density between both layers of the planet. Compare your measured moment of inertia with the model and you've got x and f for that planet, which allows you to calculate the mass of the core (if you also have the total mass of the planet from gravity measurements). The figure below shows the two-layer model and the measurements for some solar system bodies. The value 0.4 on the y-axis is the value for a homogeneous planet. From that you can deduce that Ganymede is a very differentiated planet. Hope that helps a little bit. 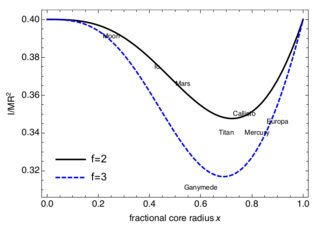 A note on how this graph was created: first of all, this isn't my graph, I took it from my lecture notes. The moment of inertia factor for a homogeneous body is calculated as

Not the answer you're looking for? Browse other questions tagged planet solar-system saturn cassini outer-solar-system .

8
Composition of planets' core
10
Do all planets have a molten core?
8
How unusual is the solar system?
1
If the planets only attract, then how can they stay in their orbit?
27
Why do the planets orbit in the same direction?
3
How can we map masses orbiting the outer Solar System by determining the orbits of planets and smaller objects?
1
If gaseous planets have solid core, can they theoretically be considered as rocky planets?
3
Are the planets Mercury, Saturn, Uranus and Neptune losing mass?
15
The compatibility of the Grand Tack hypothesis with the "core-warping impact" theory of Jupiter's diffuse core
6
If Jupiter and Saturn were considered stars, which of their moons would qualify as planets by 'clearing the neighbourhood'?