Could we carve a large radio dish in the Antarctic ice?

Could we carve a large radio dish in the Antarctic ice that could replace the Arecibo Observatory? Could this work, and what would be some potential limitations?

There are many open and active antarctic permanent bases and several antarctic astronomical observatories. There are even major large projects that involve substantial drilling and removal of ice such as the IceCube Neutrino Observatory. The biggest construction project is probably the Amundsen–Scott South Pole Station.

This is certainly a valid idea to consider and should not be dismissed out of hand by "Antarctica is hard".

There's no bedrock on which to affix your dish; it will be floating in creeping ice and subject to drifting snow.

The new station included a modular design, to accommodate rises in population, and an adjustable elevation to prevent it from being buried in snow. Since roughly 20 centimetres (8 in) of snow accumulates every year without ever thawing the building's designers included rounded corners and edges around the structure to help reduce snow drifts.

Basically everything is built up on stilts above the surface. This lets wind blow under things and prevents snow drifting which would quickly burry a surface structure.

The South Pole Telescope consisting of a 10 meter point-able dish is also built on an elevated platform sitting on stilts to prevent drifting (see below).

You could propose heating the entire dish to de-ice and de-snow it regularly, and pumping out the melt water, but power is at a premium at the South Pole. Fuel is flown in on airplanes during a short summer season and burned in electrical generators for power. Building something that requires electrical power to constantly melt drifting snow has serious practical hurdles.

At least two very large, single dish telescopes have been built into naturally occurring depressions in local rock: Arecibo at 18.3° N and FAST at 25.7° N latitudes. Both telescope designs have large primary focus structures (small buildings where people can work) suspended high above the ground at the primary focus of the dish, and in order to view the celestial equator and to track objects as the Earth rotates, moveable cables suspended from very tall towers were designed allow these structures to move around by about in two directions by roughly +/-19° and +/-26°.

For more on that see this answer to Is there an advantage to the equatorial region of the far side of the moon for a radio telescope or would any crater on the far side work?

Arecibo succumbed to deterioration of its cables caused by environmental factors and fell down.

Maintaining these kinds of necessary tall structures in the high winds and snow storms at the South Pole would be quite a challenge as well. 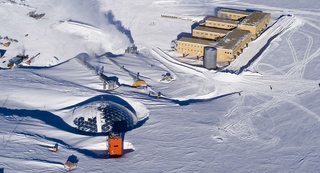 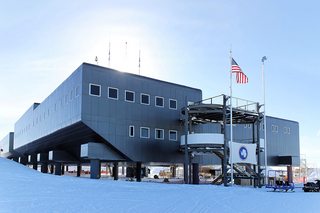 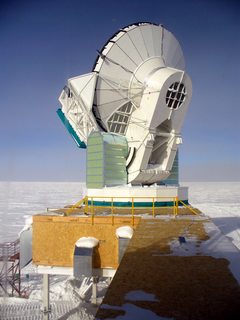 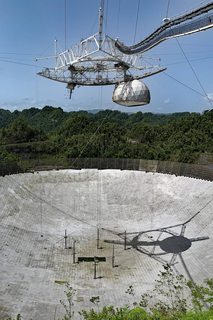 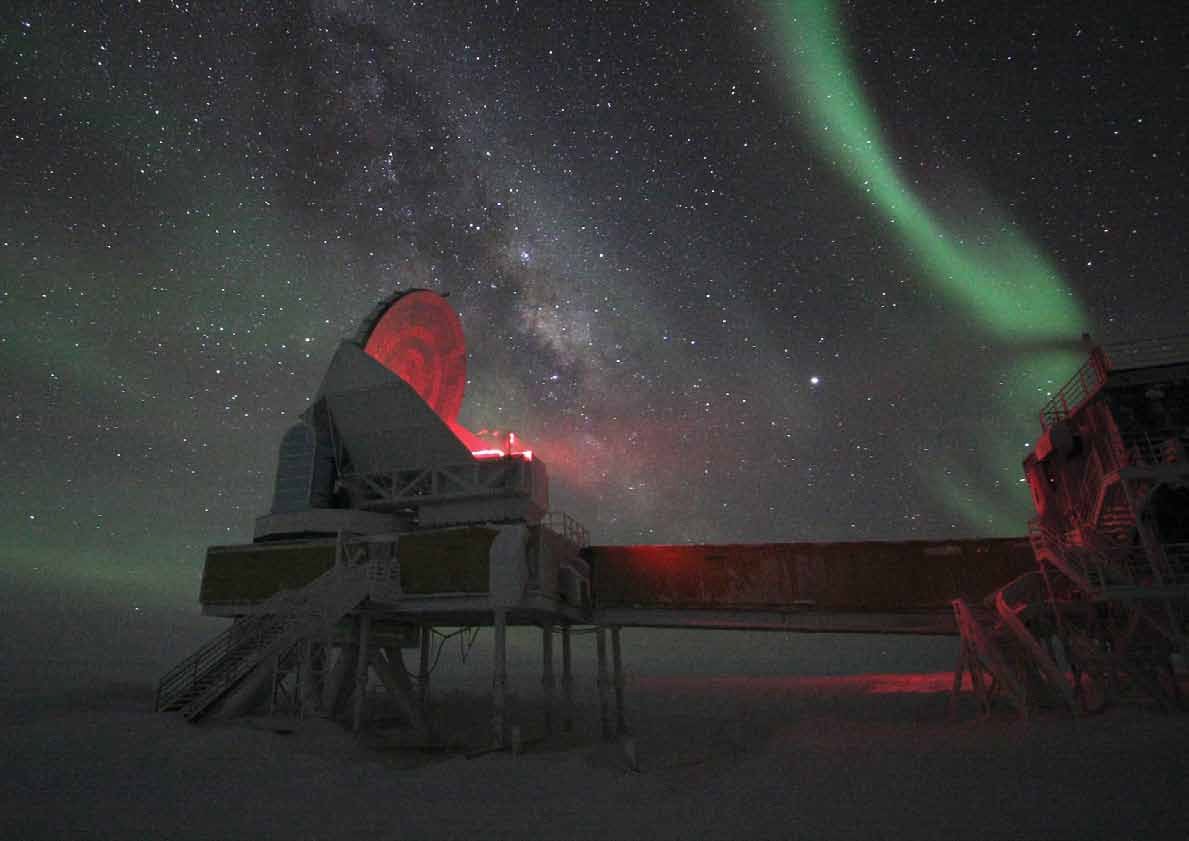 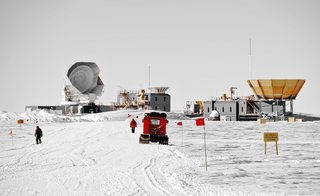 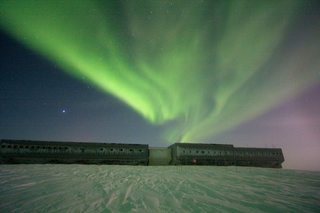 Sources for both: Antarctic Bases and Buildings - 3 Building at The South Pole via @PeterErwin's comment.

left: "The South Pole radio telescope, the very clear and dry air at the pole make it the best place on earth to have a space telescope. Photo Christopher Michel from San Francisco Creative Commons Attribution 2 Generic license" right: "In the 6 months of night time of the South Polar winter with the Aurora Australis overhead, July 2008 Photo: Patrick Cullis - National Science Foundation"

The biggest limitation is that it would be in Antarctica, one of the most inhospitable places on Earth. Getting there is hard. Living there is harder. Everything needs to be flown in and if something goes wrong you can't just drive to the nearest hospital.

Winter is hardest of all. There is little or no sun for months, and there can be intense cold and violent storms. Maintenance of a facility would be next to impossible.

The ice in Antarctica isn't stable, especially near the coast. It is constantly moving towards the sea. Inland is more stable, but getting there is practically impossible. There are no roads.

Digging into the ice isn't easy. Our machines are mostly designed to work at "normal" temperatures. And the lack of logistics makes construction very hard. Ice doesn't have "bedrock" to lay foundations for the pylons, so there are some big engineering problems to solve.

Politically it is hard, as Antarctica is governed by the treaty. There would have to be a compelling scientific reason.

And it is about the worst place to put a telescope if you want to see more than half the sky, as the whole Northern sky is behind the Earth.

Other answers deal with the properties of the ice sheet as a stable base for a precise-dimensioned equipment (it is not), the snow that will try to bury the telescope, etc, etc...

A different from the other answers approach:

The question implies that digging ice is easier than digging rock.

This is only marginally true. There are quite a number of human activities that require digging in ice, including, but not limited to, alpinism and marine vessel repair (see here - in Russian, but the pictures are good enough)

Ice is somewhat less dense than the ordinary rocks. This eases the transport a bit, only to be negated by the ability of the ice pieces to stick together under pressure or their own weight.

Ice is less rigid than most rocks... in higher than the antarctic temperatures. At -50 °C it is similar to granite.

This, complemented with the logistic nightmare the Antarctica is, the unusual failure modes of all the mining equipment at tens of degrees below freezing point and the ability to see only the southern celestial hemisphere, makes the idea less than brilliant.

The low temperatures may ease some aspects of the telescope operation (the receiver needs to be cooled to even lower temperatures), only to offer all the pleasures of the steel embrittlement, ice buildup over the suspension cables and the rather strong Antarctic winds. Once expensive to build, the potential telescope becomes expensive and risky to operate. Not a deal either.

It would be difficult to build in the Antarctic because of the location, but we managed to build big telescopes in deserts and on the top of mountains and volcanoes so it would be doable. A dish that could be pointed would be restricted to good weather viewing and there would be much of that, while a fixed dish would be restricted to a very small amount of sky because it is pointing at the axis of rotation. It could be useful to have a "top and bottom" view of the sky with a matching telescope in the Arctic.

Not the answer you're looking for? Browse other questions tagged radio-telescope or ask your own question.

3
What is the highest granularity focal-plane array on a dish radio telescope? Or is this the ONLY ONE?
2
How did single dish (or single receiver) radio telescopes originally generate images?
1
How do ASKAP's focal plane phased array feeds interact with the entire array phasing?
3
What was the field of view of the Ohio State University Radio Observatory of Wow! signal fame?
5
Building a floating, ocean-going giant radio telescope?
52
Is there any role today that would justify building a large single dish radio telescope to replace Arecibo?
3
Maritime telescopes: Stabilisation requirements for optical vs. radio telescopes?