Is there a way to calculate the mass of of a stellar remnant given the initial mass of the star?

Assume there is a star in a completely empty region of space, away from any outside influence.

Is there a way to calculate the mass of a resulting stellar remnant, a white dwarf, neutron star, or black hole(variations is accuracy are completely fine) that will result after a star dies, only given the star's mass around the time in which will die? (like an equation or something)

And, is there a way to calculate the resulting remnant's mass only given the star's initial mass during its formation?

It would be appreciated if one were to provide a concrete method or graph for determining such.

For massive stars and their remnants, one can only be guided by theoretical measurements at present, since we do not have any masses for isolated neutron stars and black holes and no measurements of the masses of the progenitors of any neutron stars or black holes (only limits). Here are two plots taken from the extensive review by Limongi (2017). These show the relationships you want (the red lines) between the final remnant mass (on the y-axis) and the initial progenitor mass on the x-axis. The calculations are highly dependent on metallicity, so plots are given here (there are more in the paper) for solar metallicity ([Fe/H]=0) and a thousandth of solar metallicity ([Fe/H]=-3). There is also a dependence on rotation, which may be important.

You have to appreciate that these red curves are highly uncertain and model-dependent.

The situation is much clearer at lower masses. The masses of white dwarfs, even isolated white dwarfs, can be estimated quite well and their presence in binary systems and clusters of stars gives the means to estimate their ages. Combining this with their cooling ages gives a good estimate of the time that their progenitor spent as a "normal" star and then stellar evolution models give an estimate of the progenitor mass. Both the modelling and measurements are much more secure and so the initial-final mass relation for white dwarfs is in quite good shape.

The plot below is from a summary by Kalirai (2013). It is likely to be superseded in the next year or two by the wealth of data coming in on white dwarfs from the Gaia satellite. The names on the plot are the clusters in which the calibrating white dwarfs were found. You will see on the plot that Kalirai gives a simple formula that represents this relationship and might be what you are looking for. I believe the dashed line is from some stellar evolution model. 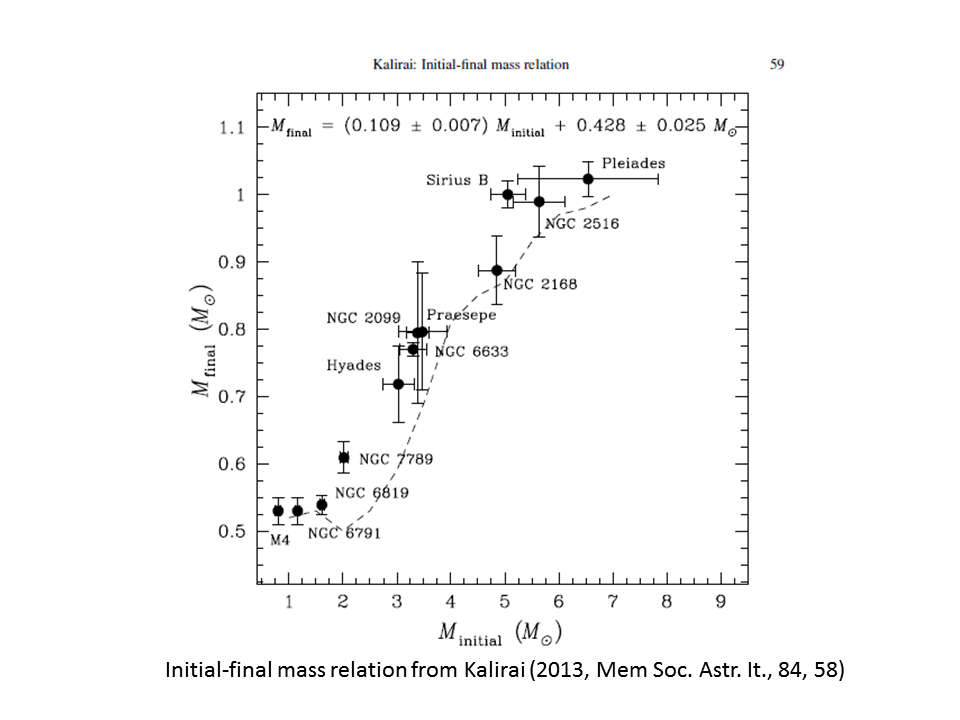 When the initial conditions, like mass, chemical composition, and rotation are the same, for the vast majority of stars there are no intrinsic variations in their development. Of course, statistical variations exist, like convection. But those act on too small scales in order to influence the star’s development, in particular its core.

Intrinsic large scale variations happen in some stars. A famous example is Betelgeuse whose dramatic change in luminosity is speculated to be caused by very large scale convection processes. But I doubt it will influence the development of the core.

Maybe rotation has the potential to induce large scale statistical processes that may lead to different outcome for otherwise identical initial condition, i.e. fixed initial rotation rate. Another process may be statistical variations during the supernova explosion.

There are several physical parameters in the modeling that strongly influence the development of stars, like nuclear reaction rates, opacity, convection and rotation models. But as long as you keep those parameters fixed, the outcome of the model calculation will be the same.

I don’t think there exists an equation for calculating the remnant mass that is justified by physical insight. But of course you can apply some fitting curve to the outcome of thousands of model calculations and use that as equation.

Not the answer you're looking for? Browse other questions tagged star mass stellar-remnants or ask your own question.

9
Is there a flaw with the newer purposes and correlations attributed to the HR diagram? (And would a third axis of mass correct the enclosed flaw?)
1
Star class according to initial mass
2
Does the mass of a collapsing star change?
2
Algorithm to stack astronomical images
8
Properties of low-mass stellar remnants vs the Earth
3
Given a star's mass, age, and composition, how do I calculate the rest of its properties?
11
Which stellar properties can we describe as "first principles" in which we can derive the rest?