Why is the Moon receding from the Earth due to tides? Is this typical for other moons?

After reading the Q&A Is the moon moving further away from Earth and closer to the Sun? Why? about the tides transferring energy to the Moon and pushing it from Earth, I have a question:

How is that energy actually being transferred to the Moon? The creation of tides requires energy, so I would expect that this should take energy from the Moon, slow it and cause it to eventually fall back to the Earth. Why isn't that happening?

Finally, if this is the general mechanism, would other moons that orbit around planets with a liquid surface and causing tides, be receding from their parent planets? 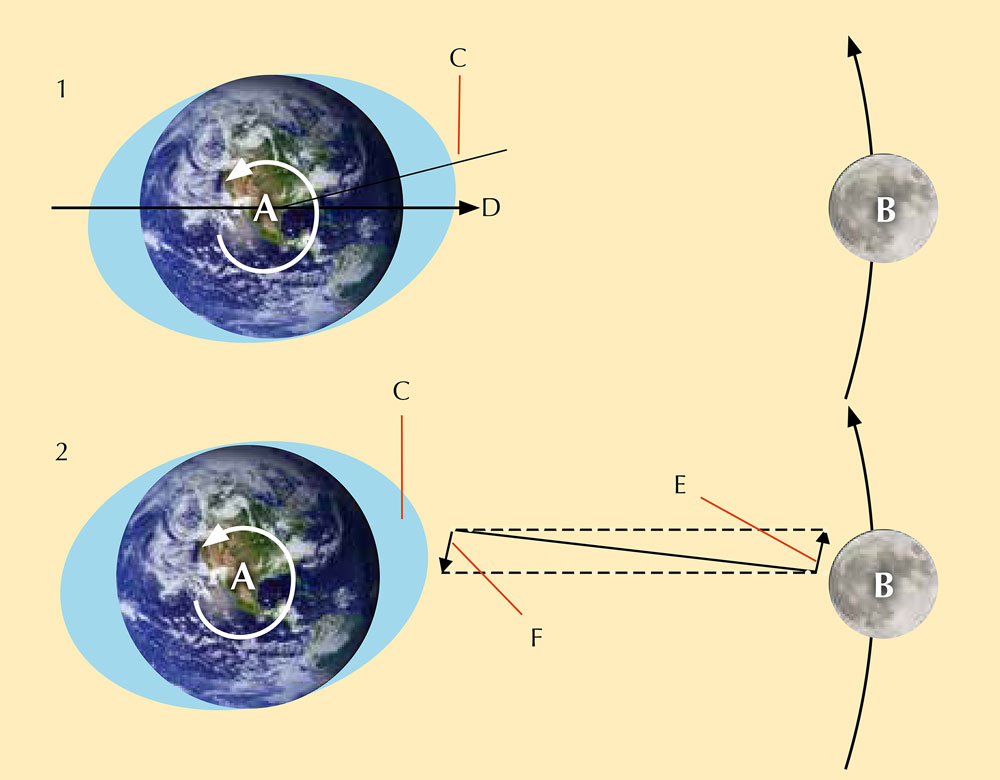 The Moon creates tides. Due to tides, the water bulges out towards the Moon (and also on the opposite side).

But the Earth also rotates pretty fast (once a day), faster than the Moon orbits the Earth (once a month). There's friction between the rotating Earth, and the watery bulge created by tides. The rotation of the Earth "wants" to rotate the bulge faster.

In effect, the rotation of the Earth drags the tidal bulge forward - the bulge is always a bit ahead of the Moon. When the Moon is at meridian, the tide is already decreasing.

So there's a bit of extra watery mass on Earth, a little bit ahead of the Moon. This watery bulge interacts gravitationally with the Moon.

This has two effects:

When you dump energy of motion into an orbiting body, it settles into a higher orbit - higher orbit means more energy. Therefore, the transfer of energy from Earth' spin to Moon's orbit gradually makes Moon's orbit larger and larger.

Note: Counterintuitively, a satellite with more energy actually moves slower, but in a higher orbit. The extra energy goes into raising the orbit, not into making its speed faster. Why this happens exactly is a whole 'nother discussion.

You have correctly identified that the tidal forces are transferring energy from the Earth to the Moon. This energy causes the Moon's orbit to get larger thus slowing it down.

It's a bit counter intuitive, but if you think about it the Earth spins a rate of 1 spin per day The Moon is orbiting the Earth with a period of approximately 27.3 days. If it were to speed up it's orbit would actually decrease bringing it closer to the Earth.

To answer your final point all other moons cause tides on their parent planets and are moving away from them, but the effects are much smaller due to the larger difference in sizes. The Earth/Moon system is unique in the Solar System as the ratio of the sizes of the bodies are relatively close to each other.

2
If the moon is losing energy dragging the oceans around, why is it moving away from earth instead of falling like any other satelite would?
2
Why is the moon drifting? Shouldn't orbital decay bring it closer?
-1
The Moon drifting away from the Earth
21
How did Mars come to have a 24 hour 39 minute day?
22
Is the moon moving further away from Earth and closer to the Sun? Why?
14
How can tidal heating lower Io's orbit?
8
How does gradual crossing over of the Roche limit transform a planet or moon?
1
How is the heat production inside moons compliant with Conservation of Energy?

17
If the moon wasn't receding from Earth, what would be the impact on the weather and tides?
0
Why doesn't the Moonrise appear red when viewed from orbit?
16
Why do Earth and moon move apart but binary black holes move closer?
3
Can mechanical angular momentum be transferred by gravity?
7
Effects of the solar tide on planets
3
What is the nature of "rock vapor" in this description of the formation of the Moon?
1
How could the Moon have arisen from a collision - what would make for an elliptical orbit?
3
Exact ecliptic position of Earth and Moon from Mars as photographed by Curiosity Rover?
1
This article says the moon may start moving closer to the Earth in the distant future; could this be true?