How can astronomers pinpoint the location of the source of a neutrino?

In the popular press, in recent months, we have heard a lot about high-energy neutrinos from far outside our solar system reaching our detectors....

If a single neutrino from a great distance randomly, rarely, smacks a xenon atom in a detector, how the heck can they 'triangulate' it's direction?

You correctly state that neutrinos do not interact too often. The physical parameter describing that is the effective cross-section. So what you observe in a detector is not the neutrino itself, but secondary particles, e.g. muons. Colloquially put, you may regard anything with high mass (density) in between the neutrino source and your instrument (to detect mainly the secondary particles) as detector for the neutrinos. This might be a large chunk of ice (like for the icecube experiment), a mountain range (as for the Gran Sasso lab), or even a complete planet, if the incident neutrinos originate from a star located on the other side of Earth at the moment of observation. The latter is possible since neutrinos e.g. from the Sun may pass through the whole planet without interacting with its matter (at night-time for the scientists working for the detector).

Let me try to explain with a drawing I took from a 2018 blog entry of the Antarctic Muon And Neutrino Detector Array (AMANDA). The red dots are on the ice surface, the vertical lines are the boreholes into the Antarctic ice shield and the little black dots are the PMTs, the Photomultiplier Tubes which detect the Cherenkov light generated by some fast muons, in the picture on the top of the blue cone. The readings of the PMTs (detecting the Cherenkov light) are displayed as color-code, I assume the color scale somehow relates to the time passed since the trigger event. 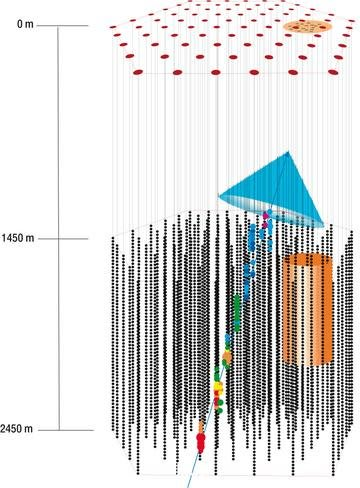 So how do we now know where the neutrino came from? We can use particle physics to derive the secondary particle's velocity (vector) and from that where the neutrino actually came from. This is not trivial and requires quite a bit of computer power, but it is possible.

High energy muon neutrinos occasionally interact and produce a muon. Energy and momentum must be conserved in the process and the muon heads off in the same direction as the neutrino.

The relativistic muon can then be tracked by a network of detectors which are sensitive to the Cerenkov radiation produced when muons travel faster than the speed of light in ice.

The muon track allow its kinematics to be measured and hence the reconstruction of where the originating neutrino came from. This can potentially be done to within a few degrees.

There is less angular resolution in the case of high energy electron neutrinos. Any muons are produced in secondary interactions and there is a "cascade" of charged leptons from which a rough direction can be reconstructed.

Not the answer you're looking for? Browse other questions tagged observational-astronomy astrophysics observatory neutrinos high-energy-astrophysics or ask your own question.

4
How Does IceCube Trace a Neutrino to its Source?
4
A new (radio) neutrino telescope in Greenland?

15
How Does Cosmology Constrain the Number of Neutrino Species?
4
Pulsars: How do astronomers measure minute changes in period (~picoseconds per year)?
6
How can a singularity rotate?
4
How Does IceCube Trace a Neutrino to its Source?
9
Can exoplanets be found using neutrino detectors?
1
How can I know the source size using the spectrum variability?
5
How can astrophysicists discriminate between pp-chain solar neutrinos and CNO-cycle ones?
4
Can you subtract magnitude of constant source to get magnitude of variable source?
3
How, precisely, do radio astronomers detect (and record) the phases of waves for interferometry?