What do the calendar rounds in Tomás Filsingers "Map of the Universe 2.000" mean?

Recently I did the Ravensburger puzzle "Map of the Universe 2.000 - Celestial Chart and Calendar Rounds" by Tomás Filsinger: 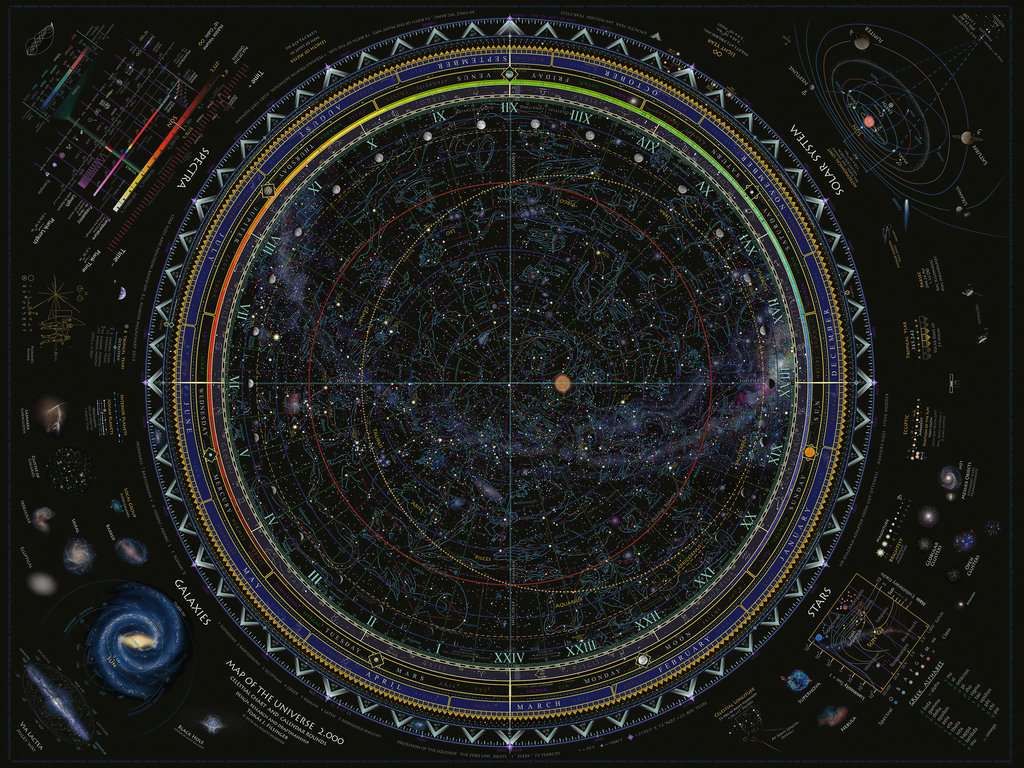 Tomás said the last time he visited this site in 2019, that he finished a new, improved map. I recognize some of the described features in the puzzle, e.g. the "60 galactic years since the big bang".

I am just trying to analyse the multiple rings of calendars, like the meaning of the blue and orange triangles, the tiny colored lines with squares (I think they are planets, but how do they relate to the calendar?), the red to blue-colored ring, why the grey (on the innermost ring) and yellow constellations (as part of the firmament), and the blue months and the grey months are shifted against another, why there are stars on the outer ring ... well almost most of what is going on in this exquisitely beautiful, but (at least for me) quite complex chart.

I asked the publisher, but he was not able to explain it.

p.s.: I included a detail photo of the puzzle 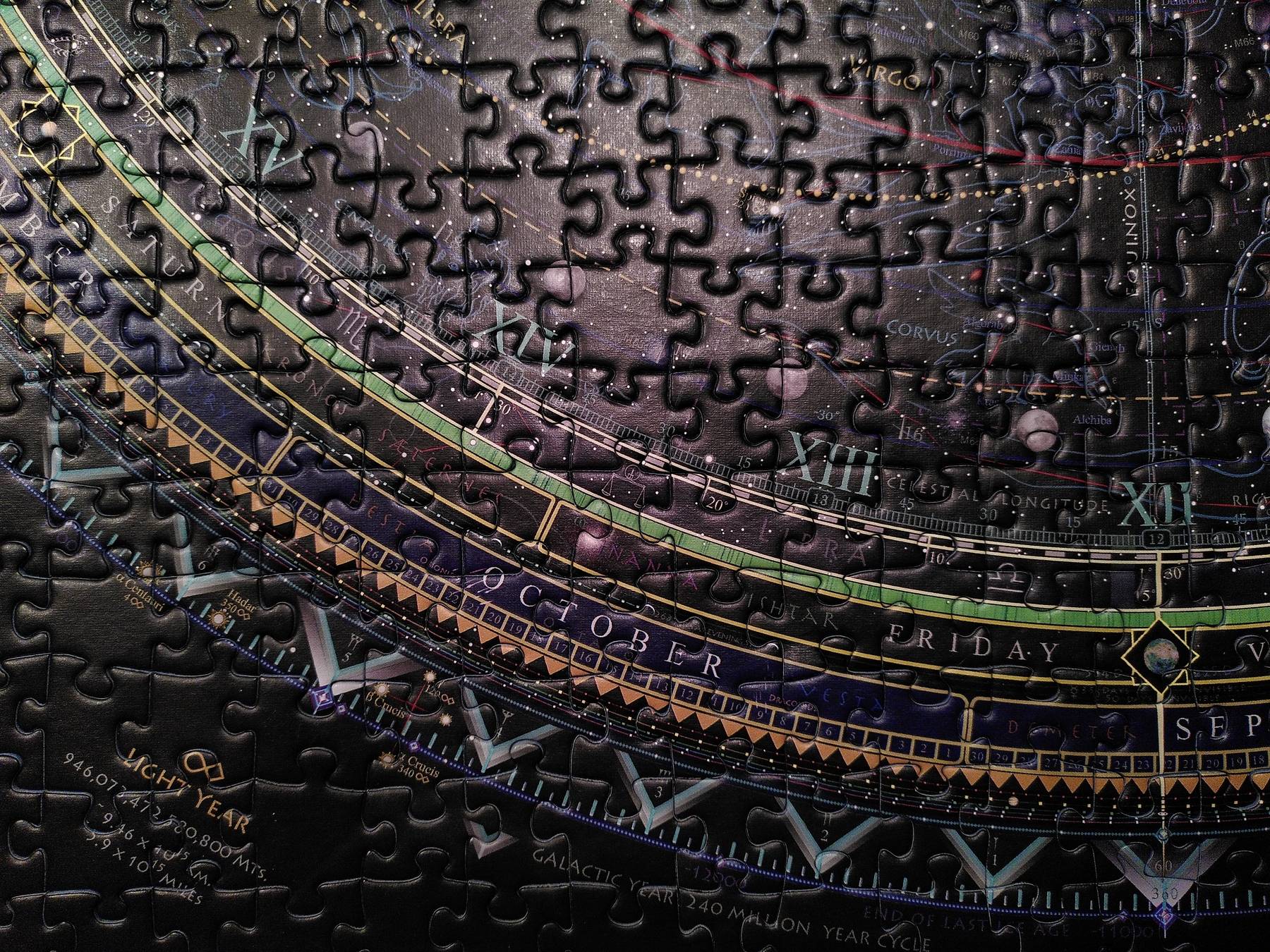 You can see several things here (from bottom to top, with my comments in parenthese; please forgive my choice of terms, I am a star map rookie):

And: how is it all connected to another ;-)

There are some more details, but these are the main constituents and corresponding questions. The booklet Tomás provided for downloading in the other post should help a bit, and if you refer me to other sources because this is all standard stuff, that would be fine for me. Looking at my questions at the start of the post I already see that I answered some of my former questions myself, but much is left :-/

The star map is centered at the north celestial pole. A thin red circle marks the celestial equator. The Roman numerals around the edge of the star map are hours of right ascension, measured along the equator and subdivided into minutes. Sidereal time runs slightly faster than solar time and corresponds to the right ascension of celestial objects currently crossing the overhead meridian. The hour labeled XIV here is more commonly designated 0h.

The months in the blue outer ring show when the Sun appears along those parts of the ecliptic, marked on the star map with a white dotted circle. Numbers at intervals along that circle indicate the approximate day of the month when the Sun passes those points. Meteor showers are marked when the Earth encounters those meteoroid streams, e.g. the Orionids in late October. The orange triangles pointing outward for each day may be mostly decorative.

As you inferred, the thin circles on either side of the month ring are for the planets in order of their distance from the Sun. I would expect the number of dots punctuating each of these lines to match that planet's synodic period in days, indicating the planet's average rate of apparent motion along the ecliptic. Depending on the Earth's and the planet's relative positions in solar orbit, this motion may at times be faster, slower, or retrograde.

The gray ring in 12 segments shows the signs of the tropical zodiac, 30° blocks of longitude measured along the ecliptic. They are named after constellations which were in the same parts of the sky ~2000 years ago; precession since then has changed that alignment. Some sign boundaries correspond to the equinoxes and solstices. The Sun passes those points about 70% of the way through those calendar months. Since the ecliptic is oblique to the equator, ecliptic longitude is slightly condensed around 0h and 12h right ascension and slightly expanded around 6h and 18h. This chart may instead show ecliptic and equatorial coordinates aligned all around for aesthetic reasons.

The days of the week are named after the Sun, Moon, and bright planets in Latin and related languages. Other than dividing the circle into 7 equal parts, their placement on this chart may be arbitrary.

The rainbow-colored ring shows the spectrum of the Sun, with thin dark lines where the electrons of gas atoms and ions absorb photons of particular wavelengths. Astronomers use this information to identify elements in the atmospheres of stars and planets. They also use displacements of spectral lines to measure radial velocity.

The dashed yellow circle in the outer part of the star map, tangent to the ecliptic at 18h right ascension, is the circle of -23.5° declination. The corresponding circle of geographic latitude is called the Tropic of Capricorn. South (outward) of -35° declination, the star map shows a few highlights in addition to Crux and α and β Centauri. These include the Large and Small Magellanic Clouds and the globular cluster ω Centauri. Crux may be plotted a few degrees east (clockwise) of its actual position for aesthetic reasons.

Not the answer you're looking for? Browse other questions tagged star-maps or ask your own question.

4
How do I make a custom pulsar map?
3
What projection would I use to map the northern night sky onto a geodesic dome?
3
Orientation of local star map
14
Looking for a detailed Milky Way map
5
Is the pulsar map on the Pioneer/Voyager probes only meaningful for earthlings?
1
Star visibility above horizon map likewise day & light map or moonlight world map
3
Is this how stars’ right ascensions correlate to planets’ longitudes on a 2d map?