Why does Earth have a dip in the CO2 absortion spectrum from 14 to 16 micron?

This paper shows that there is a dip in the CO2 absorption spectrum of Earth. In essence the trough of the absorption of CO2 for Earth is cut into two separate troughs instead of 1 large trough. Why is that? 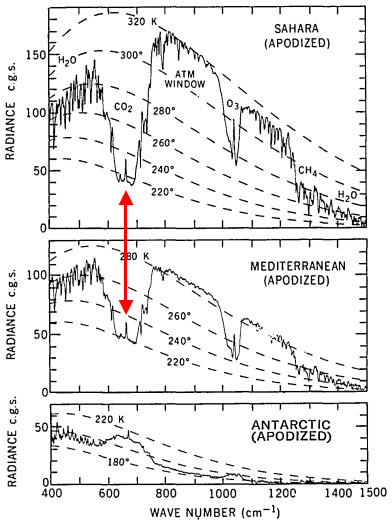 As there have been some comments on whether this is planet related or molecule related, here is an additional image which shows the absence of the double trough in the CO2 absorption pattern for Venus whilst showing it for Earth: 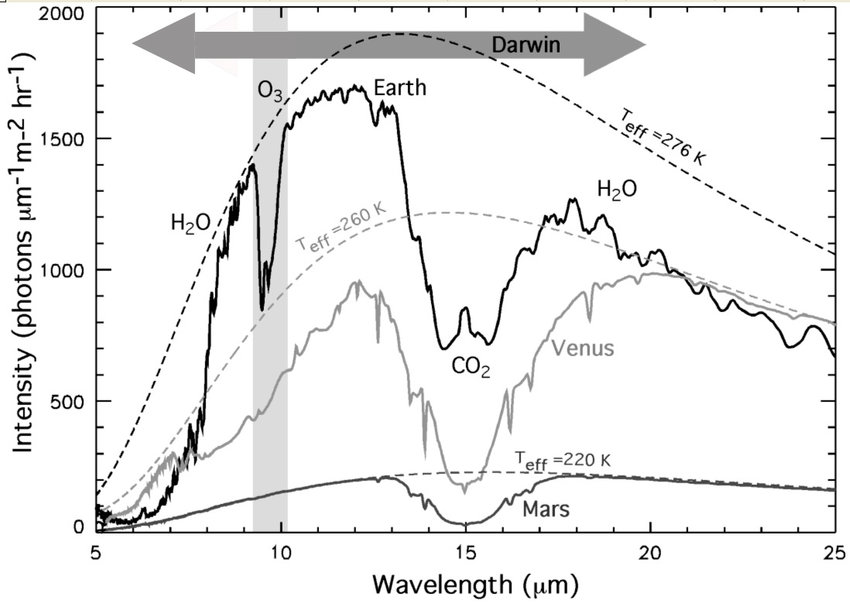 Eric Jensen has already provided a nice link to a description of the basic structure of the ${\rm CO}_{2}$ spectrum, so I'll focus on the question of why there's a "spike" at 15.0 microns in the Earth spectrum, but not in the Venus or Mars spectra.

If you look at the link in Eric's answer, the very first image shows a high-resolution version of the ${\rm CO}_{2}$ absorption spectrum, including the main features to the right and left. There is also a very strong absorption peak in the middle (the "Q-branch") at about 15.0 microns (667 ${\rm cm}^{-1}$ in wavenumbers). The question then becomes: why does this feature show up as an extra dip in the Venus spectrum (and, barely visible, in the Mars spectrum) -- as one might expect -- but apparently as a peak in the Earth spectra?

The answer hinges on the fact that the spectra shown in the question are not, strictly speaking, absorption spectra. They are actually radiance/intensity measurements of infrared light emitted by different layers in the atmosphere of the planet in question, as seen from orbiting spacecraft. (In the first figure, it's narrowed to the atmosphere above certain locations on the Earth.) They thus show a combination of the molecular absorption spectra and the temperature structure of the atmosphere.

In simple terms, the spectra show thermal (blackbody) emission from layers in the atmosphere where upward-going photons can escape to space without being absorbed by higher layers in the atmosphere. The altitude of these layers is determined by the amount of the absorbing gas (e.g., ${\rm CO}_{2}$) and the strength of the absorption at a given wavelength. The stronger the absorption, the higher up is the layer that can emit freely to space.

(Note that for wavelengths with effectively zero absorption from any molecule, the "emitting layer" is actually the surface of the planet.)

How much infrared light is emitted at a given wavelength then depends on the temperature of the emitting layer, and it is here that the vertical temperature structure of the atmosphere becomes important. For Venus and Mars -- and for most of the emitting altitudes for Earth -- the temperature decreases with altitude, so that higher emitting layers have lower temperatures and thus emit less radiation. The net effect is to reproduce the absorption features, even though the whole thing is not, technically, an absorption spectrum.

But in the case of the Earth, the strongest absorption -- e.g., in the Q-branch part of the ${\rm CO}_{2}$ absorption, at 15.0 microns -- forces an emitting altitude that is so high it is actually in the stratosphere. And in the stratosphere, the temperature increases with altitude. So the Q-branch absorption peak forces the emitting layer to be at a higher temperature than is the case for the rest of the ${\rm CO}_{2}$ absorption regime.

This University of Chicago MODTRAN web page, which plots predicted emission from the Earth's atmosphere as seen from an altitude of 70 km (default setting), shows this rather nicely. The default parameters include a modern ${\rm CO}_{2}$ concentration of 400 ppm, which gives the feature seen in the Earth observations (i.e., the local emission peak in the middle of the 15 micron trough, which I've labeled "Q-branch reversal"): 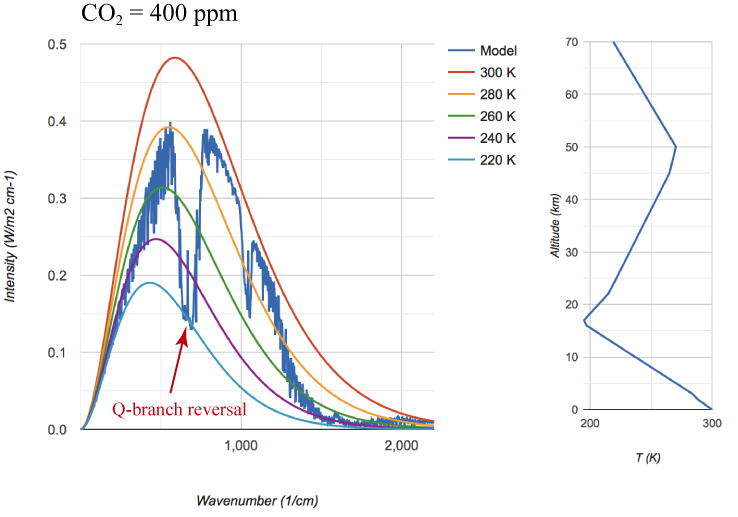 But if you dial the ${\rm CO}_{2}$ concentration way down (e.g., to 10 ppm), the emitting altitudes are lower for all ${\rm CO}_{2}$-absorbing wavelenths, so much so that the emitting altitude for the Q-branch is down below the stratosphere, and so is at a lower temperature than the rest, and thus emits less flux, giving you the expected profile (i.e., with the weakest emission at the Q-branch wavelength, instead of a reversal): 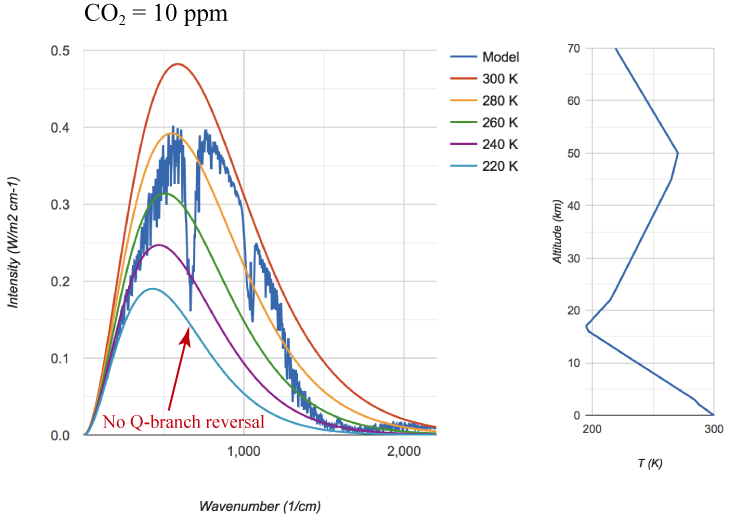 (Finally, I believe the peculiar spectrum for the "Antarctic" case in the first figure is due to the unusual temperature profile of atmosphere in arctic regions, which includes the temperature increasing with altitude in the first few km above the ground; the fact that the interior of Antarctica is high altitude might also be relevant.)

This is caused by the internal structure of the CO2 molecule. When a molecule absorbs light, the energy of the photon goes into changing the internal energy of the molecule. Many bands that are strongly absorbing (especially at infrared and radio wavelengths) are related to changes in both the rotational and vibrational energy of the molecule. In this particular band, the vibration is changing from its lowest possible value (the "ground state") to its second-lowest value. The parts of the absorption band to the right are where the rotational energy also increases slightly, and the parts to the left are where it decreases slightly (both by one step, or one rotational quantum number).

There is a more detailed spectrum of that absorption feature in this discussion of CO2 in the atmosphere.

EDIT: This doesn’t fully address the central reversal - I thought initially that it might be explained simply by smoothing the overall absorption linked above to lower resolution, but @Peter Erwin has the correct answer. See Peter’s answer for the correct explanation.

Not the answer you're looking for? Browse other questions tagged earth spectroscopy venus .

27
Why does the Earth have a tilt of ~23°?
13
How does one determine the effective temperature of a star from its spectrum?
5
How fast does Venus move as seen from the earth?
8
Why Earth does not have rings?
3
How deep is the "A" Fraunhofer line in the solar spectrum? Is it from the Sun's or Earth's atmosphere?
4
Why N$_2$ is a non-absorbing species in the spectrum of the Earth?
8
Why doesn't the Sun produce an emission spectrum?