So, I've been doing endless research, and I've found a bit of information, all in different places, that is. Now, I'm getting really confused about it; I can't keep up with it all anymore, so, now, it's time I release it here. What are the Keplerian Elements, and how do you calculate them?

I'm particularly interested in getting an explanation of angular orbital elements, such as the longitude of the ascending node (as well as the ascending node itself), the angular momentum, the argument of perihelion, the mean and true anomaly, and some other variables like the Orbital Momentum Vector.

In an answer, I want a feasibly understandable explanation of what the orbital elements above are, and equations describing how to calculate them. If there are any variables that require further research to grasp, please do the same for them. Afterwards, at the end of a response, please link the source where you got it from (if there is any), but if you got it from in-person courses, which have no link, please ignore this part, and do not try to do treacherous research to try and find one.

Hoping to find an answer soon, thanks in advance!

What Kepler (and others before and after him) wanted to do is predict where a planet would be. To do this we need some set up:

First we want a coordinate system. This is a system of axes: x, y and z, at right angles to each other. And it should be an inertial coordinate system, so Newton's laws work. This means that the axes should not be rotating. And we will be able to choose a coordinate system that is not moving relative to the centre of mass of the objects. Along with the coordinate system, we need a system of time, with some particular moment designated t=0 (and because this isn't relativity we shan't worry about clocks running at different speeds or curved space-time etc...).

Now it turns out that to completely describe the future motion of the planet, as it obeys Newton's laws of motion and gravity, you need 6 numbers. You could, for example, give the position and velocity at t=0. Three coordinates for position and three for velocity would give sufficient information.

But this ignores facts that Kepler discovered about orbits (and Newton was able to prove from his laws of motion). The planet moves in an ellipse. So we can describe the orbit in terms of the ellipse. Ellipses are squashed circles and there are two special points called foci that are off center along the long axis of the ellipse. The centre of mass will be at one focus.

Next there is the shape of the ellipse. Ellipses can be fat and circular or thin and skinny. The nearly circular ones have foci that are close to the center. So we measure the distance from the centre to either focus: $c$. And then define the eccentricity to be $e=c/a$ All ellipses with the same $e$ have the same shape, in the sense that they are all mathematically similar. $e$ is the second number.

Now we need to describe the orientation of the ellipse in space. To do this we come back to our coordinate system. The x-y plane is a flat plane with the origin at the focus of the ellipse (remember that we chose coordinates with the origin at the the centre of mass). The ellipse won't be in the x-y plane but sometimes be above (in the sense of positive z-coordinate) and sometimes below this plane.

To describe directions in the x-y plane, we will use angles. The x-axis will be at 0 degrees. And then we measure the angle from the x-axis, from 0 to 360 degrees. There will be a point in the x-y plane where the orbit crosses it, and where the planet's motion causes it to move from below the plane to above the plane. This is called the ascending node. It is a fixed point and the direction of this fixed point is called the longitude of the ascending node, $\Omega$. The inclination and $\Omega$ together define the plane that the planet orbits in.

These five numbers define the shape and orientation of the ellipse. They have been chosen partly for convenience, and partly for historical reasons. But the principle reason is that each describes a different aspect of the orbit. Unlike the state vectors where the three position coordinates are the same kind of value, each orbital element is distinct and meaningful.

The sixth element is simply the location of the planet at time $t=0$. This is an angle in the orbital plane, and there are different ways to describe this angle. The simplest is the angle between the periapse direction and the planet. This is the True Anomaly $\nu$ (nothing to do with anomalous data!) But sometimes you might see the Mean Anomaly. This looks like an angle, but is actually a measure of time. 0 means "at the periapse" and 360 means "one orbital period (year) later", so 90 means "one quarter of a year through the orbit". Because the planet doesn't move at a constant speed, a mean anomaly of 90 doesn't correspond to a true anomaly of 90 degrees.

Those are the six orbital elements:

It is a standard problem in celestial mechanics to convert from 6 orbital elements to the state vectors of position and velocity, and convert back from state vectors to orbital elements. It is also a standard problem to take the six orbital elements, which give the true (or mean) anomaly at time 0, and calculate the true anomaly at an other time. But the maths involved is rather involved: See https://web.archive.org/web/20170810015111/http://ccar.colorado.edu/asen5070/handouts/kep2cart_2002.doc or https://web.archive.org/web/20160418175843/https://ccar.colorado.edu/asen5070/handouts/cart2kep2002.pdf to go the other way

No discussion of orbital elements is complete without the Wikipedia image which describes them. 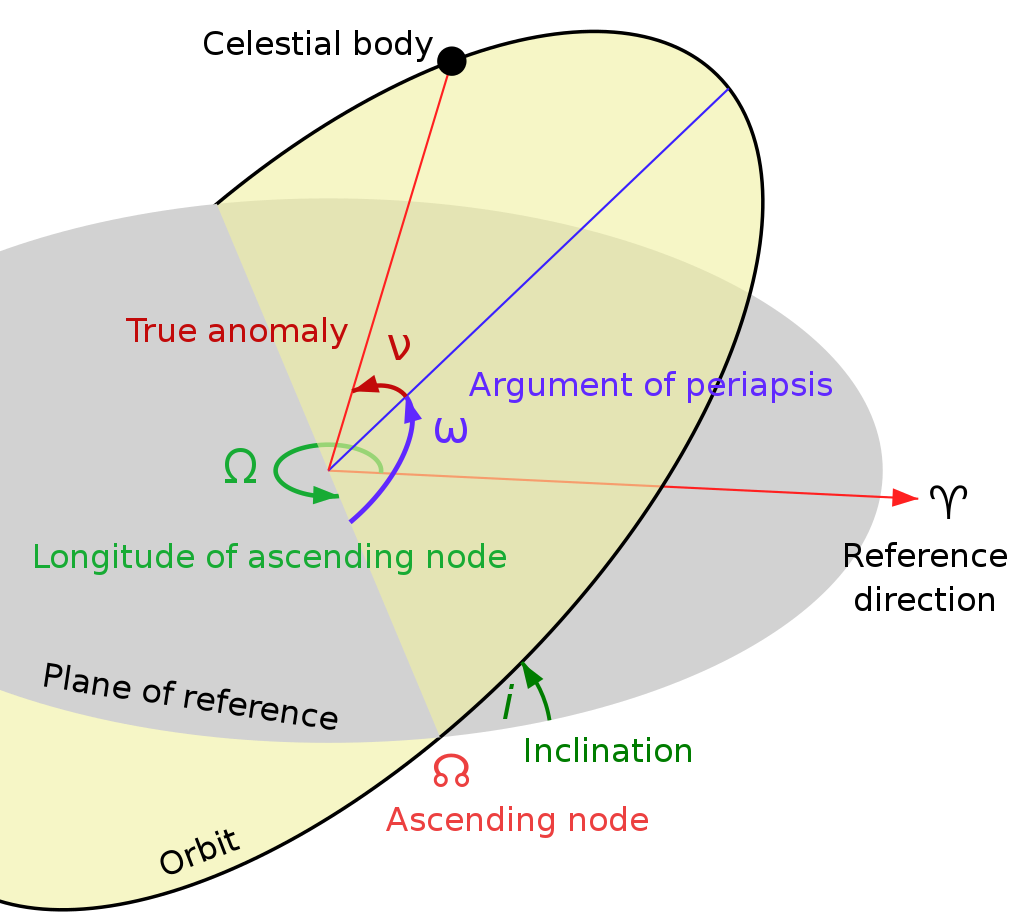 By Lasunncty at the English Wikipedia, CC BY-SA 3.0, https://commons.wikimedia.org/w/index.php?curid=8971052

Not the answer you're looking for? Browse other questions tagged astrophysics orbital-elements celestial-mechanics or ask your own question.

2
Derivation of the formula for longitude of ascending node for a satellite
0
Orbital Elements Mars near June 2014
5
Simulate an orbit with orbital elements
4
Sun's orbital elements
5
Keplerian Elements for Approximate Positions of the Major Planets
5
Coordinates in the Night Sky
0
Spectra: What is that Supposed to Mean?
2
Querying MPC data : P and Q vectors of any use to compute the eccentricity vector?
0
What are the minimum variables that determines the orbital velocity of a planet?