Did Cassini return a photo of Saturn's rings shown from closer to Saturn?

A quote from a book, Perelandra by C.S. Lewis: "no eye looked up from beneath on the Ring of Lurga"; now Lurga is Saturn, and no human eye has been to Saturn, let alone at a lower altitude than the rings, and quite probably would not survive the radiation exposure.

But we have an electronic eye; that is the camera, and on board Cassini were two cameras and these have returned photos of marvelous views of Saturn. I tried a search to find if any photos were taken looking at the rings or otherwise showing the rings while Cassini orbited so close on its final orbits, but I found only artwork.

Were any such photos taken?

Yes, on one of the final orbits it took some pictures of the rings while crossing the ring plane:

More details of that image are here, and this page show some still images.

though it’s hard to interpret without reading the description.

All the science done during the “Grand finale” orbits is described here. 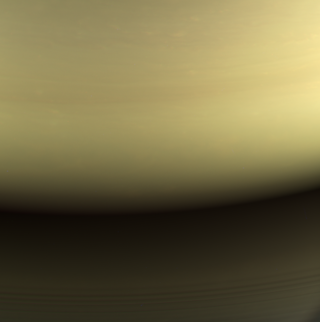 This is the last image taken by the imaging cameras on Cassini spacecraft. The image was taken in visible light using the Cassini's wide-angle camera at a distance of 394,000 miles (634,000 kilometers) from Saturn. Image scale is about 11 miles (17 kilometers). It looks toward the planet's night side, lit by reflected light from the rings, and shows the location at which the spacecraft would enter the planet's atmosphere hours later (Saturn would rotate into daylight by the time Cassini made its final dive into Saturn's upper atmosphere).

This image is actually in natural color view, created using images taken with red, green and blue spectral filters. The imaging cameras obtained this view at approximately the same time that Cassini's visual and infrared mapping spectrometer made its own observations of the impact area in the thermal infrared.

More images can be found here. This includes the last flybys of Titan, Enceladus, Daphns and some of the inner rings.

Not the answer you're looking for? Browse other questions tagged photography history saturn cassini saturn-rings or ask your own question.

10
How are the newly discovered Janus/Epimetheus rings different from the other rings of Saturn?
9
Which Saturn satellite passes closest to Saturn's rings and at what distance?
12
How did Arecibo detect methane lakes on Titan, and image Saturn's rings?