Why is Starlink polluting the night sky a big concern if we have space telescopes?

There's a lot of concern in the Astronomy community over the deployment of Starlink satellites. For a good discussion, see the related question How will Starlink affect observational astronomy?

But why is there so much concern over this problem, given that there are numerous space telescopes? Presumably a lot more will be launched in the upcoming years thanks to satellite launches becoming cheaper. Aren't space-based observations superior in the first place thanks to the lack of an atmosphere?

I understand this sucks for amateur astronomers but is it also a big problem for professional researchers?

Ground-based telescopes are still (by far) the biggest optical telescopes, and the cost of space telescopes is prohibitive for many research projects. It will be a long time before a telescope anywhere close in size to the VLT can be launched.

Most space telescopes are specialist devices, observing in a particular part of the spectrum that is blocked by the atmosphere (so there are infra-red, ultraviolet and X-ray telescopes in space) Or doing a specific task (looking for exoplanets, or mapping the positions of stars)

So it is a problem for professional astronomers.

To expand on the "space telescopes are expensive" aspect:

So it's not just that we can only build the largest telescopes on the ground (which is true!), it's also that the existing stock of smaller ground-based telescopes allow for experimentation, development, and science that cannot be done with space telescopes.

One thing I always like to add is that ground based telescopes benefit from being able to take huge amounts of data. The Vera Rubin Observatory will have a 3.5 Gigapixel camera. There are proposals to sometimes run it in a mode with 1 second exposures. So we're talking data rates of gigabytes per second. If you have dedicated fiber lines you can deal with that. But it's really hard to move that volume of data down from orbit, it would require multiple dedicated ground stations all over the world. Keep in mind, for science images you can't use lossy compression (no turning images into JPEGS!).

Number of Starlinks visible in the night sky to everyday people: more than 100 starlink satellites will be visible to us when we look at the sky after sunset and before morning. 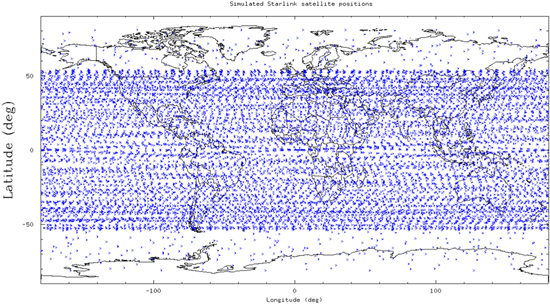 You know how distracting moving lights are, If you look at a sleeping city with thousands of little lights, and 100 planes are flying over the city, it's confusing, you have to look away. The dawn and dusk will soon consist of looking at hundreds of low flying satellites when the first stars start showing up. 1-2 hours after sunset there will still be 20-50 obvious lights still visible, you'll have to look towards the dark side of the sky to only see higher satellites. 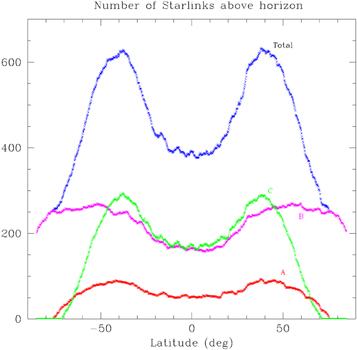 The research states 0.01 starlink lights per square degree, 1-3% of photos for narrow field telescopes will messed up at dawn/dusk, and maximum 30-40% of photos for a wide field 1 billion telescope being currently built.

You won't be able to use Starlink on any mobile phones without 5kgs of lithium batteries and a dish ( >90W Starlink / <1W 4g ), it costs 1500 euros in Europe for the first year (83 per month + 400 equipment) compared to faster fiber at 300 euros. 99.9% of developed populations already have 4g internet at home, while poor nations can't afford Starlink... no monthly prices have been announced for India or African countries.

Is it necessary? Perhaps it will be a 10 billion dollar flop because 40 million yearly customers are necessary at prices exceeding ADSL/4g/fiber and pre-orders are currently low (50k out of 40 million?).

Not the answer you're looking for? Browse other questions tagged telescope space-telescope light-pollution .

41
Why are we building larger land-based telescopes instead of launching larger ones into space?
21
How will Starlink affect observational astronomy?
11
Will Starlink deface the night sky?
11
Can automatic algorithms completely eliminate the impact of Starlink and other satellites?