What would a kHz gravitational wave detector look like? (mountains on millisecond magnetars) How would it differ from LIGO/Virgo?

The abstract of Gravitational waves from mountains in newly born millisecond magnetars says:

In this paper we study the spin-evolution and gravitational-wave luminosity of a newly born millisecond magnetar, formed either after the collapse of a massive star or after the merger of two neutron stars. In both cases we consider the effect of fallback accretion, and consider the evolution of the system due to the different torques acting on the star, namely the spin up torque due to accretion and spin-down torques due to magnetic dipole radiation, neutrino emission, and gravitational wave emission linked to the formation of a `mountain' on the accretion poles. Initially the spin period is mostly affected by the dipole radiation, but at later times accretion spin the star up rapidly. We find that a magnetar formed after the collapse of a massive star can accrete up to 1 $M_{\odot}$ , and survive on the order of 50 s before collapsing to a black hole. The gravitational wave strain, for an object located at 1 Mpc, is $h_c \sim 10^{-23}$ at kHz frequencies, making this a potential target for next generation ground based detectors. A magnetar formed after a binary neutron star merger, on the other hand, accretes at the most 0.2 $M_{\odot}$, and emits gravitational waves with a lower maximum strain of the order of $h_c \sim 10^{-24}$ , but also survives for much longer times, and may possibly be associated with the X-ray plateau observed in the light curve of a number of short gamma-ray burst.

Question: What would a kHz gravitational wave detector look like? (mountains on millisecond magnetars) How would it differ from LIGO/Virgo? 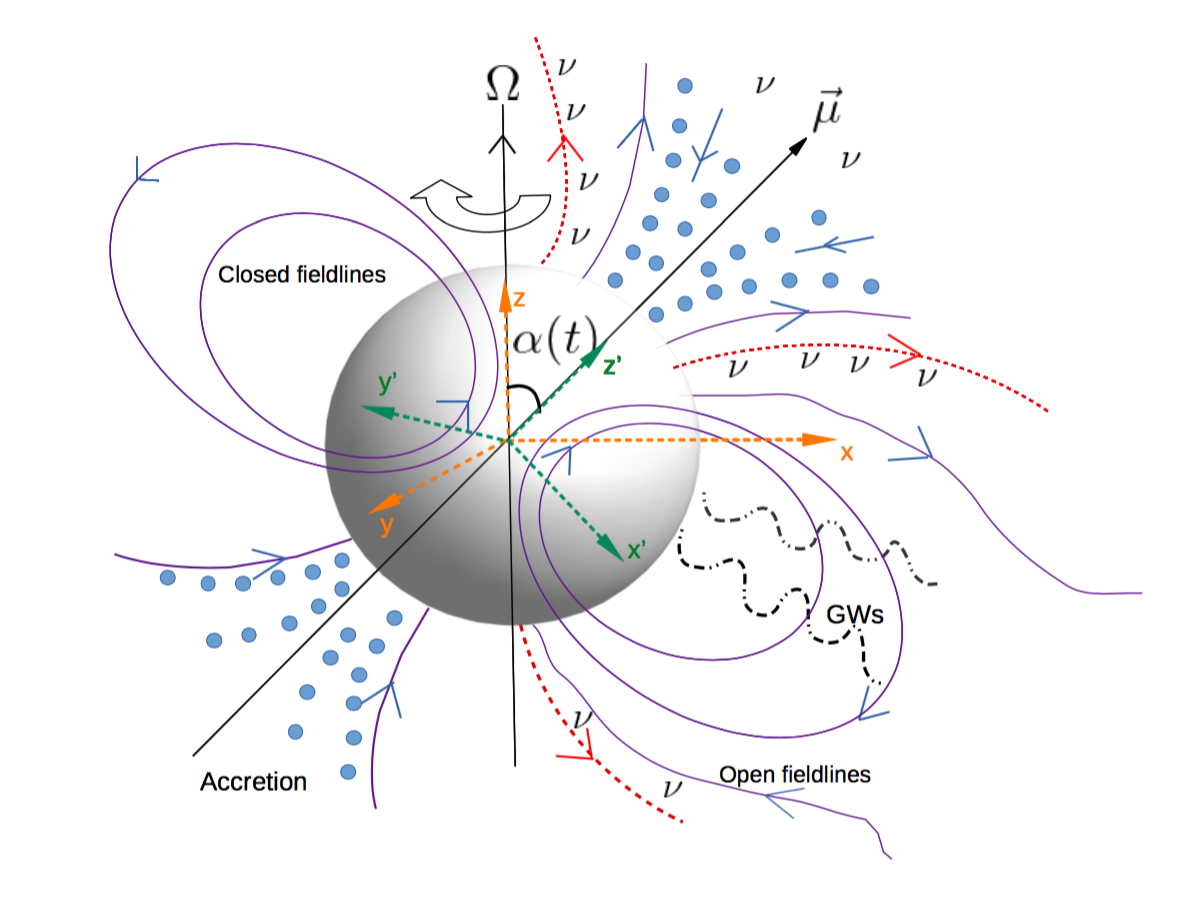 Figure 1. Pictorial description of the millisecond magnetar. There are two coordinate systems, one having the rotation axis ($\Omega$) and another having the magnetic moment ($\overrightarrow{\mu}$) axis. These axes are inclined at an angle $\alpha(t)$. The blue dots show matter falling on the two polar caps and forming two accreting columns. As the star rotates, it radiates energy in dipolar radiation and grav- itational waves. The red dotted lines represent the escaping neutrinos which carry away heat and angular momentum in the form of a wind.

In principle, not much different to LIGO, since LIGO is sensitive to kHz gravitational waves. But you need to find ways to increase the sensitivity at kHz frequencies, without compromising response at lower frequencies, or perhaps having a tuneable response. These improvements are likely to come with increased laser power and developments in the optics and mirror coatings.

Detecting gravitational waves (GWs) is limited at high frequencies by the length (or effective length, with some cunning deployment of mirrors) and at low frequencies by various sources of noise, including "radiation pressure noise" which is an inescapable consequence of using powerful lasers to do the detection.

Roughly speaking, to get maximum sensitivity at 1kHz (LIGO is most sensitive at 100Hz), you make your interferometer arm length equal to a quarter of the GW wavelength (or the total path length of the light to be $\lambda_{\rm GW}/2$). This ensures that perturbations to the arm length all "sum up" whilst the laser light is in transit. Thus for a GW frequency of 1KHz that means $L \simeq 75$ km (or a total path of 150 km).

That's fine - something of LIGO's size can be made effectively that long by bouncing the light up and down the arms about 10 times, which is much less than the $\sim 270$ times that LIGO uses in order to get sensitivity at lower frequencies.

Sources of noise at 1kHz are mostly limited to simple "shot noise" due to the finite number of photons in the laser beam. So you would need to boost the power at the beam splitter by using a more powerful laser to begin with or by employing clever recycling techniques to amplify that power within the interferometer arms.

At present LIGO is tuned to have a high amplification factor in the FP arms and a modest power recycling gain, which is limited by the effective reflectivity of the FP cavity due to losses at the reflective surfaces.

To get more power at the beam splitter, whilst maintaining sensitivity at 100 Hz, would need big improvements in the mirror and mirror coatings technology; improvements in laser stability at high power and the clever used of "squeezed vacuum" techniques which can to some extent shape the noise frequency profile, allowing modest improvements in the shot noise at the expense of radiation pressure noise at lower frequencies. For instance, by minimising losses in the mirrors, one could make the FP arms more reflective, which allows a bigger recycling gain (which goes as $(1-R)^{-1}$).

Even without these improvements, you could tune LIGO to work better at 1kHz, at the expense of its response at lower frequencies. The gain of 270 is not realised at high frequencies. You could drop this to around 20, which would increase the reflectivity of the FP arms to about 0.997 by reducing the losses (which increase with how many times the light bounces around) and could then use a more reflective power recycling mirror and get a power recycling boost of 330. This would gain you a factor of $\sqrt{10}$ in SNR at 1kHz at the expense of losing a factor of 10 sensitivity at 100Hz.

There is lots more detail in the technical documentation for the Einstein Telescope. This proposed third generation GW detector operates on the same principle as LIGO, but with improvements. It will have several "V" shaped interferometers to improve its directional response and remove dead spots; it will use more powerful lasers; it will operate cryogenically to improve sensitivity at low frequencies; it will have 2 interferometers within each set of arms, tuned for low and high frequencies respectively, as I've indicated above; it will have 10 km arms and use more massive mirrors to reduce the effects of radiation pressure and other displacement noise at low frequencies; and it is proposing big developments in optics technology (e.g. mirror losses at 1 ppm) to boost power and get high frequency response.

To briefly supplement Rob's answer, there is at least one concept being floated for a gravitational-wave detector which is explicitly targeting kilohertz gravitational waves and sacrificing sensitivity to lower frequencies: the Neutron Star Extreme Matter Observatory (NEMO). It is hoped that such an observatory would join the global network by the late 2020s or early 2030s, providing a sensitivity in the high-frequency regime comparable to the true third-generation detectors which will come later in the 2030s (see Figure 1 for the noise curves).

The vital statistics of such an observatory are laid out in Table 1 of the linked paper, and you'll see that indeed they are not wildly different from current LIGO parameters: the arms are 4km long, but the laser power is bumped up to 500W (4.5MW power circulating in the arms), and there are some fancy new coatings and some squeezing to achieve the high-frequency sensitivity at the expense of the lower frequency part of the band. The test masses are also cooled to ~150K, while LIGO/Virgo operate at room temperature.

15
Are there any gaps in the range of gravitational wave frequencies we can detect?
4
What produces gravitational waves with "periods between about 100 - 8000 seconds"?
2
Is the difference between LIGO & Virgo and their "Advanced" versions really generational, or were these just planned incremental upgrades?

2
How to derive the redshift of GW150914?
5
Could a pair of binary black holes form within a star?
2
What enhances the capture and merge rates of pairs of small black holes orbiting around supermassive black holes?
5
Why isn't IMBH candidate GW190521 very "chirpy"? Which types of events will produce the most chirp-like behavior?
2
Is the difference between LIGO & Virgo and their "Advanced" versions really generational, or were these just planned incremental upgrades?
6
Is "magnetars don't last long — just a year to a few years" really true? Is it a misquote or perhaps taken out of context?
3
Were there any gravitational wave coincidences between KAGRA and VIRGO and/or LIGO?
1
What is the current understanding of the results of the merger associated with GW190425? Black hole? Neutron star? Something else?