Why space-based VLBI scattering sub-structure is "Hopefully, a new promising tool to reconstruct the true image of observed background target(s)"?

@HDE226868 mentioned in the observatory that the GBT@20 – The Celebration; Twenty Years of Innovation and Discovery was going on. There are plenty of YouTube videos and slide sets available as links. One of which is Yuri Kovalev (LPI and MIPT Moscow)'s Space VLBI and the GBT.

Below is a screenshot that mentions

Discovery of the scattering sub-structure

and links to (these are my best-guess links)

Figure 2. Correlated flux density of Sgr A∗ at λ = 1.3 cm plotted against baseline length. Squares show the sensitive GBT-VLBA baselines, circles VLBA-VLBA baselines. Each point represents a 15-min vector average for one baseline after self-calibration; error bars show statistical ±1σ. The green curve shows the correlated flux density of the average scattering disk for an East-West baseline, as described in Sec. 2. The gray curves show quantiles of the predicted distribution of correlated flux density from substructure, with source and scattering parameters from Bower et al. (2006, 2014b), as described in Sec. 3 below.

Excess power at long baselines implies excess fine spatial structure. From what I understand this is belied to be a result of "turbulence" within the intervening interstellar medium, rather than from the original source being observed, and without being characterized and measured presents a serious limit to the resolution of VLBI, both EHT-scale and space-based, and apparently "Critical for SgrA*."

Question: This all seems to be somewhat analagous to astronomical seeing in that it needs to be understood and even measured before it can be compensated for, in order to obtain diffraction (baseline) limited resolution. But why is it "Hopefully, a new promising tool to reconstruct the true image of observed background target."? 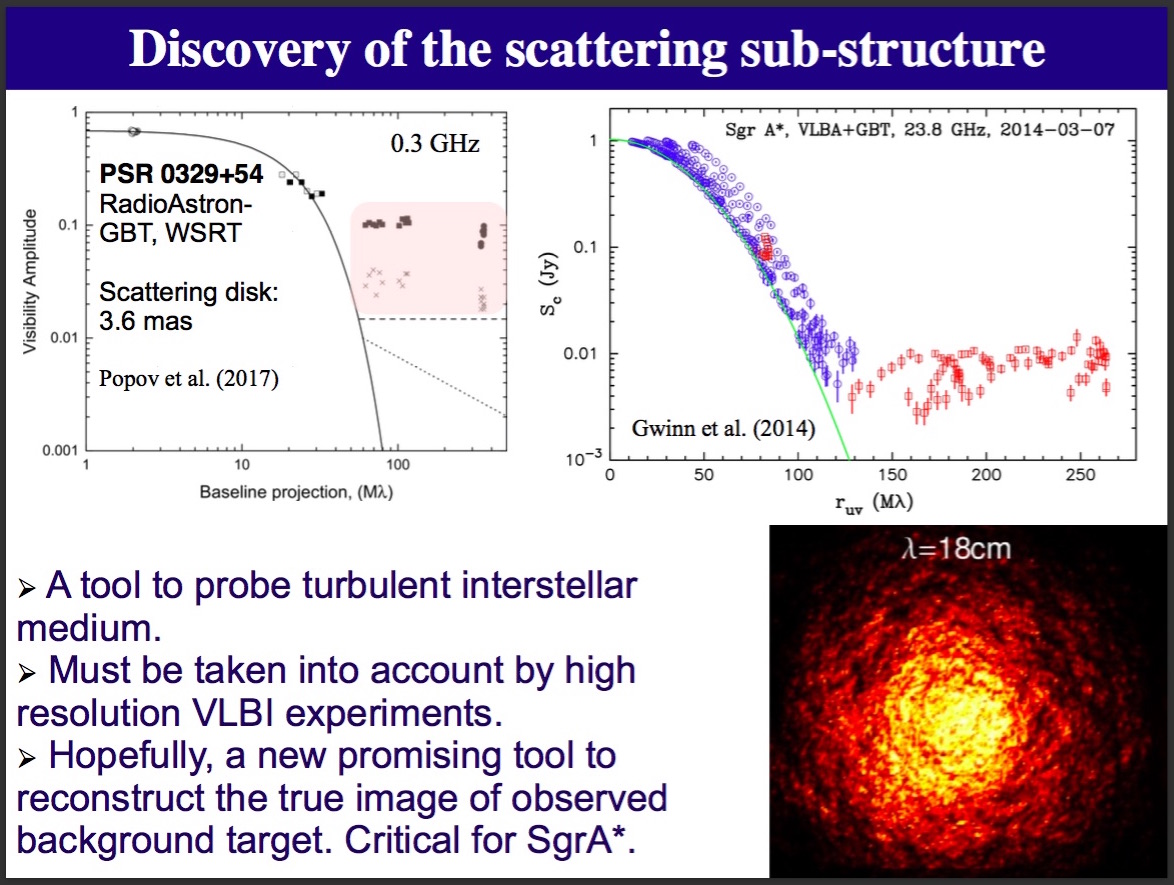 It is well known that the study of pulsars is hampered by the scattering effect - the distortion of radiation during the passage of the interstellar medium. Even very compact pulsars look like lanterns in fog. It is clear that this effect should be observed when studying not only pulsars, but also other radiation sources. And here Radioastron plays its role. The pulsar, like a lighthouse, illuminates the Galaxy, and the interstellar medium, like fog, blurs its image. "Radioastron", in turn, "filters" this radiation. It turned out that against the background of blurry images of objects in the Universe, there are ultracompact specks - a scattering substructure. Accordingly, the effect of the fine structure of scattering discovered thanks to the space interferometer will help to understand the nature of the turbulence of the interstellar medium, to determine the distance to the clouds, causing scattering of radio waves. This is a significant contribution to astrophysics and is interesting in itself. Today we already have a better understanding of the physics of turbulent flows in the interstellar medium. And most importantly, if we do not correctly interpret the results of studying the Universe, we will be able to correctly interpret the results of observations.

At the center of our Galaxy is a massive black hole - about 10 million times heavier than the Sun. It is simply necessary to study it, but scattering of radiation interferes with it. Note that the study of black holes in modern astrophysics is one of the fundamental, fundamental problems. Scientists solving them now know about the effect of scattering substructure discovered by us and take it into account in their works. Moreover, having obtained a true picture of the spots of the scattering substructure, it is possible to restore the true image of the object hidden from us behind the scattering screen. This opens up tremendous opportunities for astrophysicists. There are already results: a significant number of publications have appeared in leading scientific journals describing observational data on the scattering substructure and mechanisms for reconstructing true images of space objects.

Lighthouses in the sky. It is difficult to study our Galaxy without “illumination”. https://poisknews.ru/magazine/20721/

2
How much are the benefits of installing a telescope in orbit?
0
Did the Spectr-R space-based radio telescope use on-board accelerometer to measure non-gravitational acceleration for baseline correction?

8
Is there a cosmic, rather than technological, upper limit to what a telescope can resolve?
5
Why does the background noise in this image of 2020 QG look like corduroy?
4
Why does Nancy Grace Roman = 100 × Hubble? Why is the new space telescopes wide field camera so much wider than the old one's?
0
Did the Spectr-R space-based radio telescope use on-board accelerometer to measure non-gravitational acceleration for baseline correction?