Given that a color index ($B-V$) of star A is lower than that of Star B, What can we say about the stars?

I'm reading Introduction to Modern Astrophysics By Carroll and Ostlie. The author says,

A star with a smaller $B-V$ color index is bluer than a star with a larger value of $B-V$.

Then how we can say so??

Color is a difference, not an absolute value

Being "blue" doesn't (necessarily) mean that a light source has a large flux in the $B$ band. A color is not an absolute value; it is the ratio between two fluxes or, equivalently, the difference between two magnitudes.

Hence, the smaller $B-V$ value a star has, the bluer it is.

So when you write

it's actually not true. This mathematical expression only means that Star A is brighter (in the $B$ band) than star B; it says nothing about the color.

For instance, if you compare the flux of the Sun with the flux of a blue laser pointer, the Sun most definitely emits more blue light than the laser pointer, i.e. $B_\odot < B_\mathrm{laser}$. But that doesn't mean that the Sun is blue, because it also emits much more red light.

In the above, I've followed the sloppy astronomer notation of using $B$ and $V$ both for the filters/bands/bandpasses, and for the absolute magnitudes. More clearly, we can also write the magnitudes as $M_B$ and $M_V$.

Not also that, in astronomy, the term "bluer" is often used interchangeably with "shorter wavelength", irregardless of the actual wavelength. Similarly, the term "redder" is used for longer wavelengths.

For instance, we could say that a red photon is bluer than an infrared photons. Similarly, a UV photon can be redshifted as it travels through the expanding Universe. If it doesn't travel too long, it might be observed as "blue", in the sense that its wavelength is around 4400 Å, but although it's not red, we still says that it has been redshifted.

Relation of color to temperature

For blackbodies, hotter objects are bluer and more luminous. This is a corollary of Planck's law, which relates the brightness $B$ per wavelength ("spectral density") of a blackbody to its temperature $T$.

The flux ratio between the $B$ and $V$ wavelengths are larger for the $5000\,\mathrm{K}$ object, so its magnitude difference is smaller.

In other words, it's bluer. 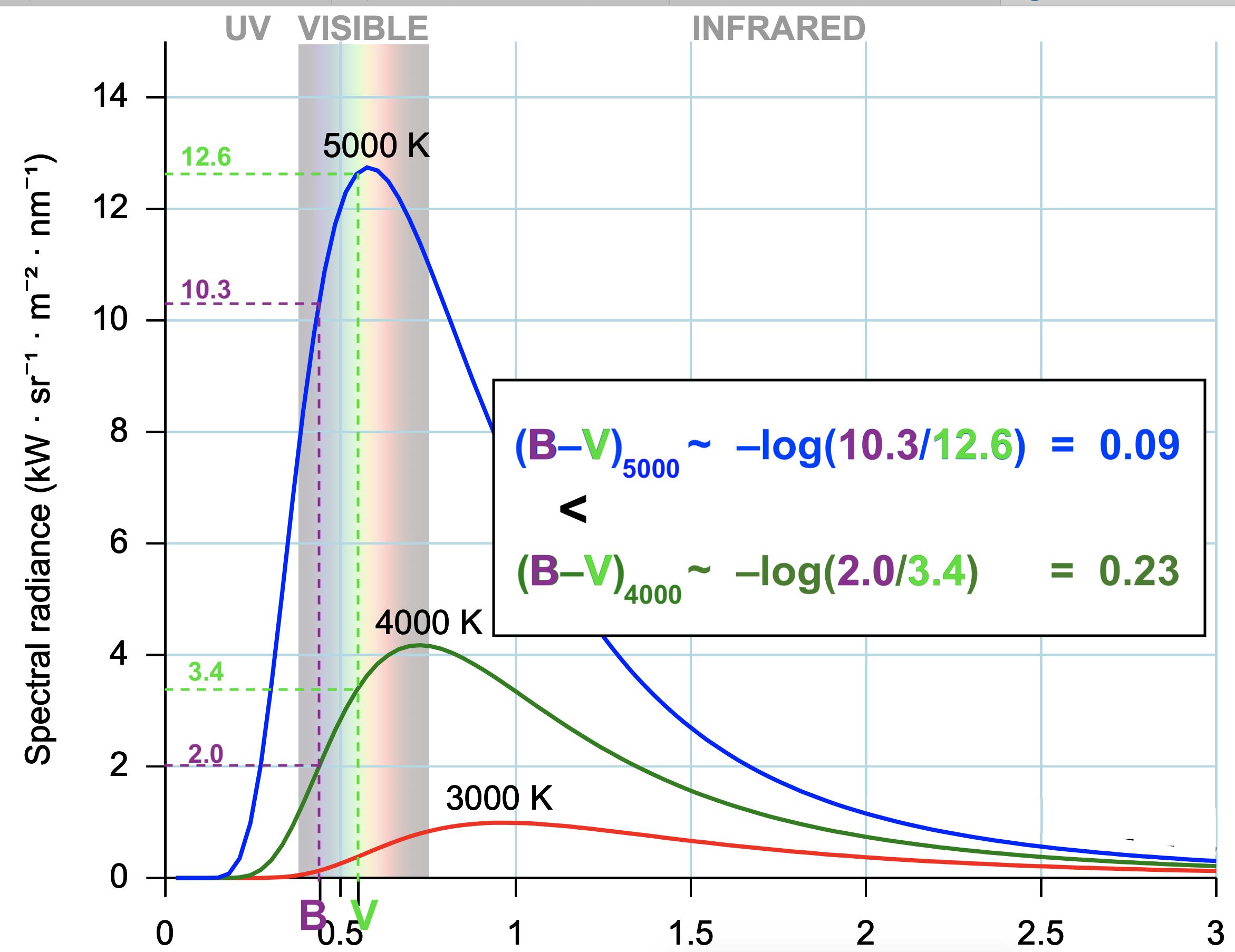 Stars are rather close to being blackbodies. However, a hot star could be reddened, e.g. by dust which preferentially absorbs blue wavelengths. Less hot stars may be blanketed by metals absorbing light and re-emitting at lower wavelengths, effectively also reddening the star. Or an object could simply not be a blackbody, e.g. a blue laser pointer.

If, for some reason, you don't know the value of $B-V$, but you know that "object A has a smaller $B-V$ value than object B", then you can't really say anything about their "true" color; you can just say that "A is bluer than B", although neither of these objects need be blue.

You can compare this to velocities. All velocities are relative, so "$v = 10\,\mathrm{km/h}$" doesn't mean anything, unless you specify a reference frame. But even given a reference frame, the statement $v_\mathrm{A} > v_\mathrm{B}$ doesn't tell you how fast A and B are; it just tells you that A is faster than B.

Not the answer you're looking for? Browse other questions tagged star temperature absolute-magnitude color-index .

18
What is the upper and lower limit of temperatures found on stars?
9
Is there a flaw with the newer purposes and correlations attributed to the HR diagram? (And would a third axis of mass correct the enclosed flaw?)
2
Relationship between metallicity and color? Should Pop. I stars be blue?
0
Do lower mass stars consume more hydrogen than higher mass stars?
0
How can the temperature of stars can be determined by their color?
2
Distance to star using color index
7
What color is a red dwarf star?
3
How can I estimate how long will a main sequence star stay on the main sequence given its temperature?
2
E(B-V) , the color excess between B and V bands, for galaxy at redshift 0