What is the Inner Horizon of a rotating black hole?

My understanding is that any object with non-zero angular momentum which undergoes gravitational collapse to a black hole will become a rotating black hole. In reality all black holes will be rotating black holes because all objects undergoing gravitational collapse will have some angular momentum (even if it is relatively small). I understand that the inner structure of a rotating back hole contains:its boundary i.e the event horizon, the “inner horizon” and the singularity which is ring-shaped. Once an object crosses the event horizon it has passed the point of no return and the singularity is a one-dimensional ring of infinite density. However, I’ve been unable to locate an article explaining exactly what the inner horizon is which is understandable to someone who has some mathematical background, but without a degree-level knowledge. For example, entering “Inner Horizon” into Wikipedia redirects to the following: https://en.wikipedia.org/wiki/Cauchy_surface#Cauchy_horizon

Which with my lack of detailed mathematical background is incomprehensible!

I have found that many of the popular science articles about black holes make statements which are unsatisfactory and and raise a lot of other questions . E.g. https://www.discovermagazine.com/the-sciences/peering-inside-realistic-black-holes states

“To visualize the inner horizon, consider this thought experiment: Imagine you could enter a spinning black hole and cross the event horizon while holding a flashlight that’s pointed outward. That light would eventually freeze along, or within, a spherical surface. That’s the inner horizon, ….. the point where the black hole’s gravity is strong enough to keep light from leaving, but not strong enough to drag it all the way into the center. The trapped light becomes so energized that it turns into a firewall of radiation, incinerating anything that passes through it.”

Does anyone know of an article explaining exactly what is the inner horizon is to the educated layman? Or would be able to explain themselves by answering this question? I would like to know what happens when an object crosses the inner horizon and WHY? 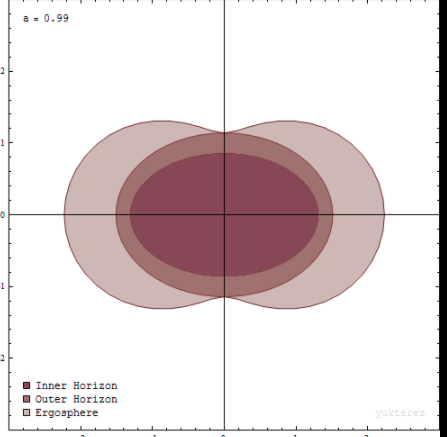 This is an attempt at a completely non-mathematical description although I'll use the proper terms for things. Caveat: it may be wrong: my memory of this is rather distant now and I haven't spent much time trying to sort out the details. I would welcome corrections (and/or a better answer!).

This answer also started with the intention of being a brief sketch and has turned into something much bigger. It is as a result very thinly referenced: sorry for that. I will try to make it better.

The first thing to think about is what sort of paths through spacetime do massive objects take? The answer is that they travel on what are called 'timelike curves', and, more precisely future-directed timelike curves. A future-directed timelike curve is simply a trajectory that some massive object, like a person, say, could take through spacetime (you actually need to be fussy about this and insist that the curve is smooth and probably a few other things). Things which are massless, like light, can travel on 'null curves' and there are also 'spacelike curves' which nothing travels on: null curves represent the boundary between timelike and spacelike curves in some sense.

Future-directed timelike curves are often called 'worldlines', because they are the curves corresponding to the paths objects like people and rockets take through spacetime.

There are special subsets of these families of curves called geodesics, which are the curves that things which experience no acceleration travel on. A timelike geodesic is the curve a stone would follow (if you threw it in a vacuum and there were no other forces on it...). Geodesics don't really matter below.

Timelike curves have lengths, and the length of them is the time experienced by an object following them, which is called the 'proper time'. Null curves have zero length (yes, this is fine). Geodesics are extrema of length: the geodesic (or geodesics) between two points are the longest curves between those two points. This is like the definition of a straight line in ordinary geometry but longest rather than shortest. It's also how the twin 'paradox' works, of course.

So first of all, let's look at a Schwarzschild black hole: one that is not rotating. It has one special surface, which is the event horizon. The important thing about the event horizon is that any future-directed timelike curve which passes through it will meet the singularity, and will do so after only finite proper time. What this means is that, once you've passed the horizon there is no way back through it, and at some time after passing through it (time from your point of view, so proper time) you will hit the singularity. (Caveat: in GR, in real life you presumably meet whatever quantum thing actually replaces the singularity). This holds for all timelike curves, not just geodesics: you can have a rocket which is as powerful as you like and it doesn't help (although the acceleration from it will kill you).

OK, the Kerr solution is more complicated: it has three special surfaces, two of which are horizons.

The first special surface is what's called the 'static limit'. To see what this is you need to know about a weird thing in GR called 'frame dragging'. Frame dragging is a feature by which rotating objects in GR (such as planets, stars, anything) tend to 'drag' the spacetime around them so that objects near them 'want' to rotate with the large rotating thing.

Well, for a Kerr BH there's a region where, in order not to rotate with the object, you would need to be going at the speed of light. Or, in other words, all timelike curves within this region get wrapped around the BH. Within the static limit you can't stay still: you must rotate with the BH.

So once you're inside the outer horizon you are travelling through region II, and you spend only a finite time in it. After that, the 'something' you meed is not, this time, the singularity, it is ...

The inner horizon is, in a way, the nearest thing to the Schwarzschild singularity for the Kerr solution: it's the place that you will get to, in finite proper time, once you pass the outer horizon. But it's not very like the singularity because it's not a singularity: it's just another one-way door through which you pass.

The inner horizon is a 'Cauchy horizon' (see below).

Once you're inside the inner horizon, you're in region III. And as before there's no going back. But region III is very strange indeed. If you take it seriously, it has two extremely strange features:

Both of these lead to very awkward situations: a closed timelike curve (CTC) is a time machine: it is a worldline which you can move along into your own past. So that's a bit awkward. Fortunately these CTCs are all inside not one, but two horizons.

Except: what happens to the worldlines which miss the singularity? Well, if you take this seriously, what you have to do is to do what's called 'extending' the spacetime of the Kerr solution, and once you do this you have two possible fates for these things:

A Penrose diagram of Kerr

One way of seeing this is to use a Penrose diagram, which is a picture of spacetime which has been conformally transformed to make it compact. What that means is two things: a conformal transformation is one which can change lengths but doesn't change angles, and making spacetime compact means that points at infinity are brought in to a finite distance, so you can have a picture of an entire, infinite, spacetime on a finite bit of paper (well, OK, you have to suppress two space dimensions in the usual way).

Here is a diagram I drew of the Kerr solution (any errors in this are mine). This only includes two copies of it: you need to remember that there is an infinite chain of these things. Time goes upwards.

So, here is what is going on in this diagram.

As I said above, I think this is (now more) correct, but any it may (still) not be. Note also that the static limit, which is in region I, isn't shown here at all: it just has the horizons.

But I think it's commonly accepted that this is pretty clearly all just a theoretical toy, because this only works for a solution which actually is a Kerr BH: what people call an 'eternal black hole'. Real physical BHs are not like this, because they originate from collapsing objects: no BH can be older than the age of the universe. Therefore I believe that the inner structure of real BHs is probably not like this at all.

Both of those things, in particular the lack of stability, make it seem unlikely that the internal structure of real spinning BHs is Kerr. Least of all would this seem to be true for BHs which originate from collapse, which is probably all BHs, since whatever internal structure there may be does not yet exist from the perspective of an external observer.

However this all well beyond my competence, and I am simply not sure what the current state of things in this area is.

I wish I had some better references, sorry.