If our galaxy is mostly empty space then why does it look so solid?

This question has probably been asked quite a few times, but I'm having trouble finding anything due to the fact that this question is very specific in nature. So I'm asking again.

We know that outer space is mostly empty and stars are very far apart from each other. So much so that when two galaxies collide, the stars within them will just fly past each other instead of crashing. But when I look at pictures of the Milky Way, (some of them are real pictures of the center of the Milky Way taken from earth, while others are renderings) it looks so bright and so solid, like theres so much stuff in there. It becomes hard to believe how it can be that it's mostly empty.

Can anyone please explain what's going in there?

You are mostly empty space. Every atom in your body is very tiny compared to the relatively vast spaces between it and its nearest neighbors. And the same goes for every "solid" object you ever saw.

But when you look at yourself in a mirror, the number of atoms you see is so incredibly vast that you don't see the spaces between them but instead think that yhour body is a solid object.

And probably the wavelengths of visible light are too long to fit between atoms and so get bounced back from the surface of your body.

That is not the case with the galaxy, since the spaces between stars in the galaxy are wide enough for all wavelengths of light to pass through instead of being reflected.

The maximum angular resolution of the human eye is 28 arc seconds or 0.47 arc minutes,[19] this gives an angular resolution of 0.008 degrees, and at a distance of 1 km corresponds to 136 mm. This is equal to 0.94 arc minutes per line pair (one white and one black line), or 0.016 degrees. For a pixel pair (one white and one black pixel) this gives a pixel density of 128 pixels per degree (PPD).

Furthermore, galaxies are not a single layer deep. Depending on the size of a galaxy, the distribution of stars within it, and the angle from which it is viewed, a viewer might see tens, hundreds, or thousands of layers of stars one behind the other. The stars are not arranged in any sort of regular lattice pattern, but orbit around the center of the galaxy in separate orbits and their relative positions slowly change, thus making their relative positions random.

Thus the empty spaces between stars in the outermost layer of a galaxy will show the light of stars farther behnd them.

So when you look at galaxy from a distance of one million light years, the smallest part of the galaxy you can see will have the light of hundreds or probably thousands of stars blended together with the black space between them to make a pale grayish light.

But any photograph which shows an entire galaxy will show the light of millions or billions of stars blurred together into a blob of light.

The actual transparency of something depends on whether a light ray will pass through the object or hit something, becoming absorbed or scattered. The total cross-sectional area of the stars of a galaxy is microscopic. This is why one can see the background galaxy through the foreground galaxy in NGC3314: 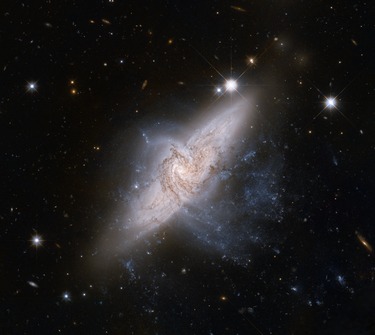 However, dust can be actually opaque in this sense. If you have a volume $V$ of matter and split it into $N$ convex pieces, they will have average area $\propto (V/N)^{2/3}$ and average cross section 1/4 of that. But there are $N$ pieces, so the total cross-section area will behave as $N^{-2/3}\times N \propto N^{1/3}$: as the number of pieces grows the area shading light grows despite each piece individually being less likely to cover any given ray. This is why interstellar dust can form dark clouds and lanes that actually hide things behind them despite having a small total mass (it is opaque in visible light; they are transparent in other wavelengths). Some dusty galaxies can be fairly opaque, but the dust is usually concentrated to some regions leaving the rest transparent.

The apparent transparency also depends on whether light emitted from the object overshadows the faint light passing through it. A nearby galaxy will be much brighter than a remote galaxy behind it, making it hard to make out against the foreground glare.

One way of thinking about this is to think of what, for instance, a digital sensor would see (does see!) when looking at a galaxy. Even if there is no dust to scatter light (which often there is), if there is, in most cases, one or more (generally 'more') stars in the bit of the image covered by a pixel in the sensor, then that pixel will be at least partly on. The galaxy will therefore look like a more-or-less solidly bright object. It's only when you get to high enough magnifications that the average sensor pixel isn't covering part of the image which has a star in it that you will start seeing the galaxy for what it is, which is something which isn't a solidly bright object.

Obviously eyes and film are not completely the same as digital sensors, but the same thing applies.

First, you are correct that galaxies are mostly empty space, at least in terms of stars. The Milky Way may have as many as 400 billion stars while Andromeda has roughly two and a half times that number. For the Milky Way that comes out to roughly one star every four light years, on average.

Viewed from a distance, however, those stars are extremely bright against a dark background. Four hundred million of anything in a 6x10 glossy are going to look like a clump.

But galaxies are more than stars; there is also a tremendous amount of gas and dust, with a scattering of larger bits of rock. Some of the light from those stars interacts with that gas and dust, sometimes reflecting and other times absorbing and re-emitting. This scatters the light in much the same way a lampshade scatters light from a bulb. It appears as though the lampshade is a solid mass of something, but it is, in fact, an illusion, if you will, caused by the scattering or diffusing of a much smaller, central light. You may have seen very large balloons lit from a relatively small light; the entirety of the balloon appears to glow. 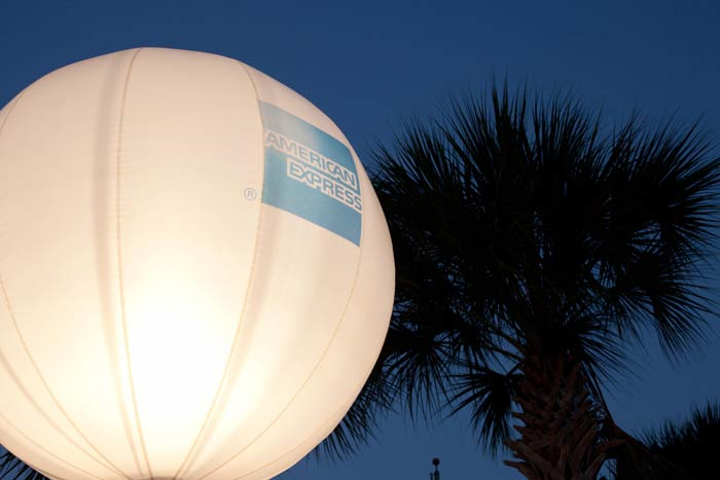 This balloon is lit by one small LED. Remember, though, that it is gas and dust rather than any sort of membrane which is diffusing light in galaxies, and that the dust and gas can be lit by any number of stars. So, the combination of extreme distance, huge numbers of stars and the diffusion from dust and gas, in contrast to the darkness of space surrounding the galaxies, is essentially the effect we are observing and gives galaxies their "solid" appearance.

Don't trust your eyes when they tell you something is solid.

Please remember that the stars are suns.

So, if our galaxy were really solid, you'd directly look into a star's surface in every spot of the Milky Way, and that would mean a band in the sky where every spot shines as brightly as the sun. Then the Milky Way would be 100 times brighter than our sun's daylight.

We all know that this isn't true.

It's our eyes (and optical instruments as well) that can't really appreciate how tiny the sun-like bright spots of a galaxy are, and how vast the black space between them. The fact that the Milky Way appears as faint as it does tells us that the ratio of shining spots (stars) to dark areas (empty space) must be very, very low.

As a comparison, when looking at your computer screen, you get the impression of a solid white surface, but in reality it's lots of tiny red, green, and blue spots, and only our limited eye view integrates that to a solid-looking surface.

Not the answer you're looking for? Browse other questions tagged star galaxy amateur-observing milky-way galaxy-center .

29
What are the odds that the Sun hits another star?

22
How do we know Milky Way is a 'barred' spiral galaxy?
10
Fate of the Spiral Arms of the Milky Way and Andromeda
6
What is in the brightest area of the night sky?
5
Why when we look through a telescope in space, do the billions of stars not block our view from seeing further?
6
Can we see the stars at the edge of the Milkyway?
4
How many galaxies can be seen in a given patch of sky
2
Are the viewable nebulae only in our galaxy?
4
Why do other galaxies have such a low surface brightness?