If my eyes were really big, would I see radio waves?

Considering an assertion that the fundamental difference between different ‘types’ of electromagnetic waves is frequency/wavelength, and larger antennas are needed for longer wavelengths, if my eyes were larger proportional to the difference in wavelength between visible light waves and radio waves, would they see radio waves?

radio-astronomy electromagnetic-spectrum
Share
Improve this question
asked May 5, 2021 at 17:42

No. But the reasons are biological, not physical. Your eyes work by the interaction of electromagnetic radiation with certain molecules ( rhodopsin which consists of the protein opsin linked to 11-cis-retinal, a prosthetic group.)

Yes, and the reasons are both physical and biological.

As far as I know there are currently no known organisms that "see" radio waves. However, there are certainly molecules that could be inefficiently stimulated by radio waves. GHz frequencies will warm water and so a "radio retina" could work off of tiny temperature shifts just like the snake's eye-pit "retina" does.

It is also conceivable that your giant eyes could eventually evolve molecules with quantum resonances in the few x 100 cm-1 to few x 1000 cm-1 range (30 to 3 microns) just like those hypothesized in the Vibration theory of olfaction (See also Status of the Vibrational Theory of Olfaction and New evidence for the vibration theory of smell and Differential Odour Coding of Isotopomers in the Honeybee Brain and An Update on Vibrational Theories of Smell) These molecules could easily have dipole moments allowing them to be excited directly by electromagnetic radiation, or indirectly by thermal excitation, and if directly, then "color" vision would be facilitated by molecules with different resonant frequencies just like in the theory of olfaction.

However you'd need either reflective optics (a shiny concave surface instead of a lens) or a thin fresnel lens or compound eye using lenslets based on water's attenuation length of millimeters at some near infrared wavelengths.

But most people would call this wavelength range infrared, not radio, so it doesn't count.

If you made a giant eyeball say ten meters in diameter, the lens could focus radio waves but only at certain thicknesses and wavelengths. The figure below shows that in the long wavelength limit the real index of refraction $n$ of water is about 9 and the imaginary part $k$ drops with longer wavelength.

Of course if the lens were made of mostly nonpolar (or less-polar) molecules like some proteins or fats, then they would have to be a lot thicker (real index circa 1.5) more like optical lens shapes, but hopefully the absorption $k$ would be lower too.

Using radio wavelengths you'd probably have to use the thermal effect; again like the snake's eye-pit "retina" you'd have to use water or some even more polar molecules to absorb the radio waves locally and convert their energy to a tiny increase in temperature.

If the radio waves were really really strong, your retina might respond to temperature changes, but this would not be efficient.

Source: Ms. Thesis of Mark Lee Mesenbrink (1996); Complex Indices of Refraction for Water and Ice from Visible to Long Wavelengths 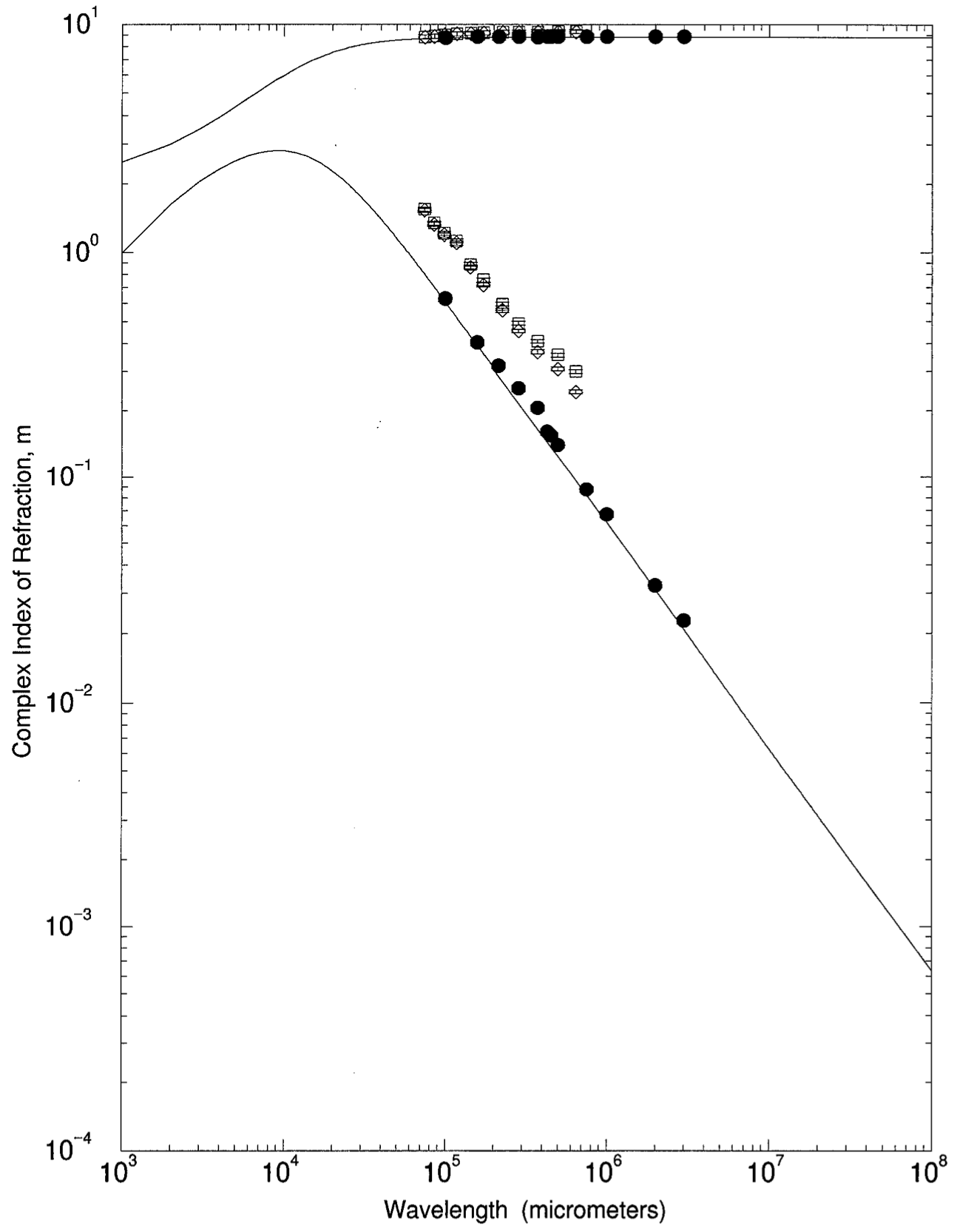 Not the answer you're looking for? Browse other questions tagged radio-astronomy electromagnetic-spectrum .

6
What determines which frequency range a radio telescope has?
3
How do we convert other waves of the EMS to visible light?
7
How large does refraction become in radioastronomy?
0
How often do they move most/all of ALMA's dishes?
3
Just how fast is a Fast Radio Burst thought to be?
1
In the 1950's how were radio-astrometric positions with portable dishes so precise they could be assigned to their dim optical counterparts (Quasars)?
0
Does a photon need to have EXACTLY the right energy to be absorbed by a gas molecule?
4
What is the significance of using baseline pairs in radio interferometry?
3
How, precisely, do radio astronomers detect (and record) the phases of waves for interferometry?
1
Why would radio astronomers choose ¹³CO and C¹⁸O spectral lines instead of the most isotopically common combination?