How distorted will our galaxy be if we are viewing it from several thousand light years away?

I saw this answer and read this sentence regarding the distortion of our galaxy when viewed above the galactic plane:

Once you got to a point where the entire [sic] galaxy was within your vision, the entire galaxy would look distorted, since our galaxy is 100,000 light years [sic] across, the light from the edges of the Galaxy would be thousands of years old, and would not match up with how the spiral should appear.

I am thinking that this could potentially be true, but I am not sure why or how distorted it would be. Does this fact hold, and for what distances will it no longer be distinguishable?

Note: I have thought that it will be well-blended because the distance does not spike, it increases gradually, but I need verification.

galaxy light
Share
Improve this question
asked May 9 at 17:48

An observer a distance $h$ above the center of the galaxy would observe light coming from a radius $R$ to have to travel an additional time $$\Delta t=\frac{1}{c}(\sqrt{h^2+R^2}-h)=\frac{R}{c}\left(\sqrt{\left(\frac{h}{R}\right)^2+1}-\frac{h}{R}\right)$$ which is a decreasing function of $h/R$. Its maximum is at $h=0$, where it would be on the order of 100,000 years for stars on the outer edge of the disk. Clearly, $\Delta t\ll\tau$, so there would not be an appreciable distortion, per se, because of the additional distance. While it's true that the objects you'd see would indeed have moved some amount by the time the light reached you, it wouldn't be significant.

Yes, there would be some distortion, but not enough to make a visible difference. Let's do a rough calculation.

However, that's not much time compared to the time it takes the galaxy to rotate. Galaxy rotation is rather complicated, but roughly speaking, the inner part of a spiral galaxy rotates much like a solid disc, with a constant angular speed, so the rotation speed at a given radius is approximately proportional to the radius. The outer parts tend to rotate at a roughly constant linear speed. Wikipedia has some details for the Milky Way, including this graph: 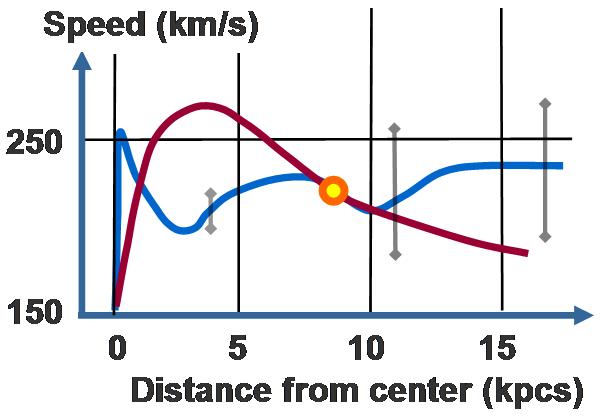 Galaxy rotation curve for the Milky Way – vertical axis is speed of rotation about the galactic center; horizontal axis is distance from the galactic center in kpcs; the sun is marked with a yellow ball; the observed curve of speed of rotation is blue; the predicted curve based upon stellar mass and gas in the Milky Way is red; scatter in observations roughly indicated by gray bars, the difference is due to dark matter

Not the answer you're looking for? Browse other questions tagged galaxy light or ask your own question.

44
Does the sun cross other spiral arms in its movement around the galaxy's center?
1
Will we be able to see our galaxy if we travel far enough?

12
Do stars of a galaxy change their positions relatively to each other?
5
How can light reach us from 14 billion light years away?
7
Why don't we see more supernovae in our galaxy?
16
Boötes Void numbers, 2016
1
Do far away planets reflect light in the same way our moon/earth reflects light?
4
What is the density of stars in our region of the galaxy, up to say, 1000 light years distant?
1
Will we be able to see our galaxy if we travel far enough?
12
What will happen to the shape of a galaxy when a super massive black hole lying in its center dies(evaporates out)?