Is there anything different about the gravitation around a non-spinning black hole and a neutron star of the same mass?

If we perform a simple experiment by orbiting identical spacecraft around a non-rotating black hole and a non-rotating neutron star of equal mass at a "safe" distance, and ignore differences other than gravitation (e.g. magnetic fields and charge) would there be any differences in their orbits predicted by general relativity?

"Safe" distance means far from the event horizon of the black hole and where tidal forces don't disrupt the spacecraft.

After writing this answer I am now wondering if it's 100% correct.

Birkhoff's theorem is very useful: in general relativity, if you are in vacuum and there is a spherically symmetric gravitational field, then it will be the Schwarzschild solution. This solution only depends on the mass, not on the size of the object. So the neutron star and the black hole will give rise to exactly the same orbits.

If they were spinning they would be distinguishable (in principle), otherwise not.

Astrophysical black holes and neutron stars are expected to spin. In the case of a neutron star that automatically means that the mass/energy distribution is not spherically symmetric and therefore that the detail of the potential outside the surface depends on the detail of how the mass is arranged (e.g. the mass quadrupole and the spin octopole), which in turn depends on the equation of state of the neutron star, not just on its mass and angular momentum - see for example Pappas & Apostolatos (2013); Pappas (2017); Frutos-Alfaro (2018) for calculations of the metric outside spinning neutron stars.

For a spinning black hole, the potential is determined by the Kerr metric and simply depends on the total mass and angular momentum with no additional details required.

i.e. The spacetime metrics outside a spinning black hole and a spinning neutron star with the same $J$ and $M$ are different.

The difference in the metrics has observable consequences (in principle) for say the innermost stable circular orbit (ISCO), the orbital frequency at the ISCO and for orbital precession. For example, see the plot below (from Luk & Lin 2018), which shows there are big differences in the ISCO radius if the value of $J$ is large (in practice, I think this means rotation frequencies of $\sim 1$ kHz are required). 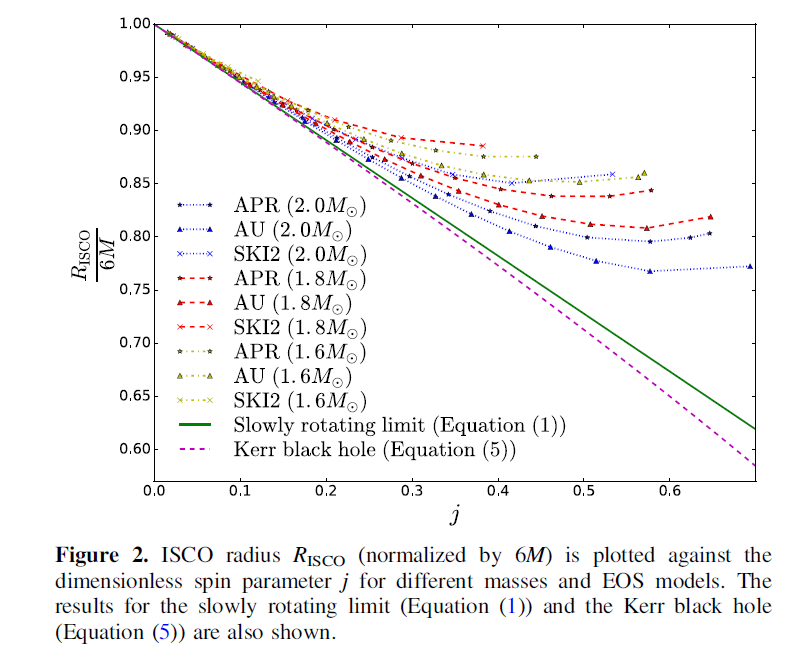 For non-spinning objects, Birkhoff's theorem applies, as described by Anders Sandberg, and there would be no distinction.

This tidal response is governed by the so called tidal Love numbers of the Neutron star. (The Love number for a a non-spinning black hole is zero).

For more massive orbiting objects it does become relevant however. For example, it is the leading correction to the inspiral of a binary neutron star compared to a binary black hole of the same mass.

Not the answer you're looking for? Browse other questions tagged black-hole gravity general-relativity neutron-star .

19
Can Newton's gravity equation explain why black holes are so strong?

4
Ramifications of black hole stellar system
1
Is it ever possible that the graviation from the mass of kinetic rotational energy will overcome centrifugal force?
8
Spinning black hole vs non spinning black hole
6
How could a neutron star collapse into a black hole?
5
Stellar mass limits for Neutron Star and Black Holes
1
Black hole, escape velocity, going up?
6
What is the closest one could get to a black hole and still stand a realistic chance of escape?
4
Has GAIA learned anything about General Relativity looking near Jupiter? (Gerry Gilmore: "oblate rotating mass moving in a deeper (Solar) potential")