Planetary tails: How many have we observed yet?

Just recently I learned that Mercury has a sodium tail and it is actually well studied since long:

As a result, the planet has the appearance of a comet, with a tail that's been observed streaming nearly 3.5 million kilometres away from the planet.

This made me wonder about exoplanets with tails, like WASP-69b. How many (exo)planets are known to have a tail?

exoplanet mercury
Share
Improve this question
asked May 10 '21 at 20:48

Yes, apart from WASP-69b, there has been reports of other exoplanets emitting some form of planetary tails. Let's start from the Wikipedia:

KIC 12557548 b is a small rocky planet, very close to its star, that is evaporating and leaving a trailing tail of cloud and dust like a comet. The dust could be ash erupting from volcanos and escaping due to the small planet's low surface-gravity, or it could be from metals that are vaporized by the high temperatures of being so close to the star with the metal vapor then condensing into dust.

In June 2015, scientists reported that the atmosphere of GJ 436 b was evaporating, resulting in a giant cloud around the planet and, due to radiation from the host star, a long trailing tail 14 million km (9 million mi) long.

Astronomers using NASA's Hubble Space Telescope have confirmed the existence of a baked object that could be called a "cometary planet." The gas giant planet, named HD 209458b, is orbiting so close to its star that its heated atmosphere is escaping into space.

Astronomers have confirmed that the planet Gliese 436b seems to be trailing a gigantic, comet-like cloud of hydrogen. 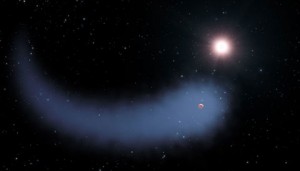 Disintegrating planets allow for the unique opportunity to study the composition of the interiors of small, hot, rocky exoplanets because the interior is evaporating and that material is condensing into dust, which is being blown away and then transiting the star. Their transit signal is dominated by dusty effluents forming a comet-like tail trailing the host planet K2-22b, making these good candidates for transmission spectroscopy.

Not the answer you're looking for? Browse other questions tagged exoplanet mercury or ask your own question.

5
How can Mercury's sodium tail be imaged?
4
Why is sodium such a common ion for in ion tails?
2
Why would a planet form a cometlike tail under conditions of weaker rather than stronger solar wind?

6
What proportion of planetary systems have been found with 'Hot Jupiters'
14
How close are we to having the technology to measure planetary obliquity for exoplanets?
5
How many earth-like planets do we know at this moment?
5
How can we tell how many exoplanets a star has?
7
Do most planetary systems have fewer planets than the solar system?
4
What could possibly save an atmosphere other than a magnetic field? Why can't a magnetic field save the atmosphere in certain cases?
4
How many exoplanets have been found around binary stars?
6
Have any planetary systems been found around Population II stars?
3
I have seen so many articles but how can finding exoplanet density determine composition