Flux vs. Velocity representation of spectra?

I'm looking for a basic explanation of the flux vs. velocity representation of a spectrum and how it's obtained from the regular flux vs. wavelength representation. A good example of this is in Arav et al 2001 (see here, Fig. 2 and 3). 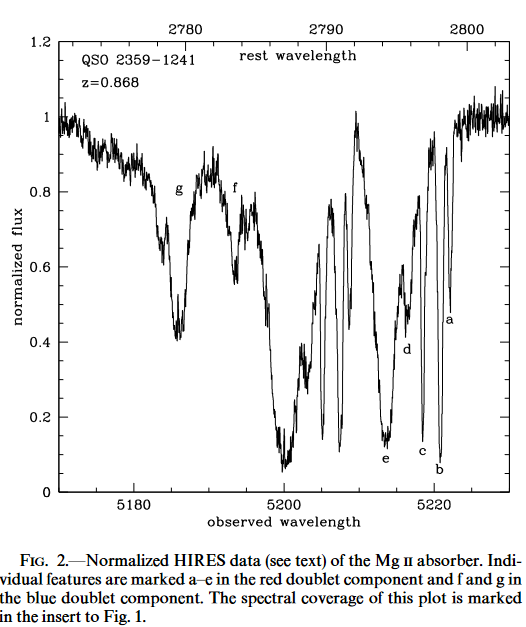 More specific questions I can ask are:

• How do you convert between wavelength and velocity in these figures (i.e. what phenomenon are we using to make the conversion & what's the equation)?
• What thing has the velocity in question/what does the velocity represent? For example, is it the astrophysical object moving in this direction?

... But any further elaboration is much appreciated. As much as I've seen these (I'm trying to brush up, it's been a while since I've done astro stuff), I can't find any explanation for this; perhaps I don't know the right jargon, but yeah it's difficult to find a simple answer. Thanks in advance for the help.

spectra mathematics velocity
Share
Improve this question
edited May 11 '21 at 6:45

For a check on this - calculate the velocity of feature "b", which appears to be at about 5221 Angstroms in the observed spectrum for the redder doublet component (the thin solid line in Fig.3). Using the above definition, this would be a velocity of -915 km/s.

Either way, there is major disagreement between Fig. 3 (which I suspect is in error) and Figs. 4 and 5 (which could be reconciled with the above analysis if the redshift was 0.8676).

I'm sorry this is not very conclusive and I certainly wouldn't accept it without someone else verifying that the x-axis of Fig.3 appears to be problematic.

Not the answer you're looking for? Browse other questions tagged spectra mathematics velocity or ask your own question.

4
radial velocity fitting of a binary
1
Suns Orbital speed and escape velocity question
4
How to calculate the heliocentric velocity of an object?
3
How to Calculate Planetary Equilibrium Temperature in Binary systems
3
What is a thermal distribution of eccentricities?
0
Spectra: What is that Supposed to Mean?