Tidally locked Venus, is it possible and consequences?

Suppose, Venus becomes tidally locked. Will its dark side cool enough so that the CO2 from the atmosphere to precipitate in liquid form to make an ocean?

Also, I wonder, how close Venus is to becoming tidally locked? Does it accelerate or slow down its rotation?

It may not be possible for Venus to become tidal locked

I don't think we know if it's possible for Venus to become tidally locked. Correia et al. 2008

expect the equilibrium rotation to differ from the synchronous motion

for planets like Venus with thick atmospheres relatively close to the Sun.

This might be best illustrated with a graphic from Auclair-Desrotour et al. 2016: 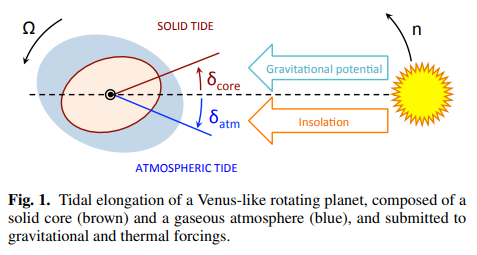 The gravitational torque is driving towards a tidal lock, but the thermal atmospheric derived torque is in opposition.

the planet could have weather cycles stretching over decades, which could lead to equally long-term changes in the rotation period

This article: The Gale Winds of Venus Suggest How Locked Exoplanets Could Escape a Fate of Extreme Heat and Brutal Cold suggests that the super-fast winds of Venus could occur even if Venus was tidally locked. These winds exceed 100 m/s, which, according to the article is 60 times the surface rotation speed. Even though Venus has an incredibly slow rotation rate currently (~243 days) the difference between night and day temperatures is very small. We wouldn't expect much more deviation if Venus became tidally locked, as the heat transport is primarily driven through various other transport mechanisms than the Sun. A relatively small amount of the Sun's energy makes it to the surface of Venus.

Edit: In the comments, uhoh asks about the super-fast winds of Venus:

Is this mechanism keeping Venus' back side warm discussed anywhere in a peer-reviewed state[...]?

As a quote from Horinouchi et al. (the "SR" in the quote refers to Super-Rotation, which is the super-fast winds):

SR may also occur in tidally locked exoplanets—those that always face the same way toward their host star and are therefore heated only on one side. Zonal (east-west) flow around the rotation axis, including SR, can transport heat from the dayside to the nightside of those exoplanets

Showman and Polvani go into greater detail in their paper: Equatorial superrotation on tidally locked exoplanets.

13
Is the moon "perfectly" tidally locked and, if not, how long would it take us to observe it's rotation?
8
Eventual outcome of tidal acceleration and deceleration
3
Tidally locked, and yet spinning?
6
Why do the upper-atmosphere clouds of Venus appear to have that V shape?
5
Could iron rain upset tidally locked WASP76b?
14
Shouldn't tidal locking be impossible for a satellite that has a considerably eccentric orbit?
3
How close to a host star can a tidally locked planet be and its dark side still maintain a moderate temperature?
2
Are there tidally locked bodies where the "far side" is denser?