We all know about SN1987A, the closest observed supernova since Kepler's time. Its progenitor was Sanduleak -69 202, a magnitude 12 blue supergiant, catalogued in 1970. Were there any images of this star before it exploded, and how did we know that this was the star that produced said supernova?

star observational-astronomy supernova
Share
Improve this question
edited May 18 '21 at 7:52

Yes, it is clearly visible in photographs of the LMC from the 1980s. It is shown in this comparison from the Australian Astronomical Observatory

We know it was this star in the most simple possible way: The supernova occurred exactly at the same location as this star, and when we look now, that star has gone (replaced by a little bipolar supernova remnant)

Another link worth sharing comes from ESO and is called The Large Magellanic Cloud before and after SN1987A. The link mainly shows the following 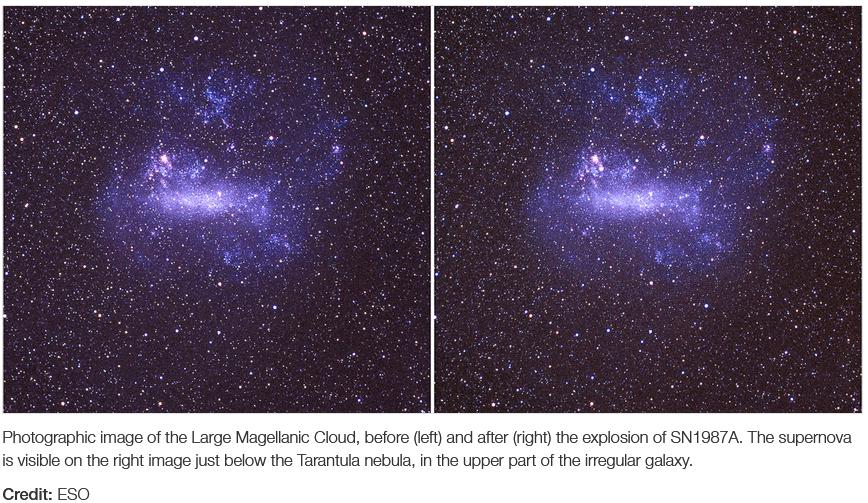 There was also at least one spectrum (Sanduleak 1970), which was the basis for its classification as a B3 I supergiant in Sanduleak's catalog.

Observations of the supernova and retrospective astrometric analysess of the images of established its spatial coincidence with Sanduleak $-$69 207 (e.g., West et al. 1987, Walborn et al. 1987, Girard et al. 1988), which is very suggestive (but not ironclad) evidence that it was the progenitor.

The supernova faded very rapidly in the UV, and so the first post-outburst evidence that Sanduleak $-$69 207 had indeed disappeared came from UV observations by the International Ultraviolet Explorer satellite in March, 1987, which found that the remnant UV flux was consistent with the two neighboring main-sequence B stars only, without any of the expected contribution from Sanduleak $-$69 207 -- which as a B supergiant would have dominated the UV light if it was still there (e.g., Gilmozzi et al. 1987).

Not the answer you're looking for? Browse other questions tagged star observational-astronomy supernova or ask your own question.

13
How will the recent appearance of a supernova, the closest in 27 years, help reduce the uncertainties in our measurements of dark energy?
4
How massive does a main sequence star need to be to go type 1 supernova?
6
What are the possible solutions to the Red Supergiant problem?
34
Are there observable changes in a star about to become supernova, minutes or hours before the explosion?
5
Have I just observed a supernova?
1
Is there any cosmological evidence that neutrinos travel at a speed other than c?
2
Can radioactive decay rates be confirmed by looking at supernova?
11
Was the "green star" event in NGC 3314 ever figured out or named?
5
Why did supernova 1987A's "String of 'Cosmic Pearls'" appear to be so lumpy 20 years later? Is it still?