Is the smaller companion of Pulsar J0453+1559 still the smallest known neutron star? Was it further confirmed to be a NS after Martinez et al. (2015)?

@ProfRob's Physics SE answer to What is the theoretical lower mass limit for a gravitationally stable neutron star? was linked just now in their answer to Can a neutron star ever be less than about 1.44 solar masses (the Chandrasekhar limit)? Why not? which notes that a smaller neutron star companion to the J0453+1559 pulsar might (or might not) be the smallest currently known pulsar:

The abstract of Martinez et al. (2015) includes the sentence:

If this companion is also a neutron star (NS), as indicated by the orbital eccentricity of the system (e=0.11), then its mass is the smallest precisely measured for any such object.

Given the orbital eccentricity (e = 0.11), the companion is very likely to be a neutron star – if it had evolved into a massive white dwarf star there would be no sudden mass loss associated with a supernova explosion and the system would have retained the circular orbit that is characteristic of compact accreting systems. This is consistent with the non-detection of an optical counterpart of the system in any of the optical catalogs. However, the high eccentricity does not entirely settle the matter: the recent discovery of a recycled pulsar with a massive (∼ 1M⊙) companion PSR J1727−2946 Lorimer et al. (2015) and an orbital eccentricity of 0.0456 bridges the previously observed eccentricity gap between systems with NS and massive WD companions. In the remainder of this paper we will assume, with caution, that the companion is a NS.

That the companion may be a neutron star is important for this analysis; the next sentence is

The pulsar’s orbital eccentricity allows a detection of the advance of periastron, ˙ω. If both components are compact, as implied by the optical non-detection, this is given by:

And the conclusion section notes that this is a relatively small eccentricity for double neutron stars listed in Table 1 as of 2015.

It's now been six years, so I'd like to ask:

Question: Has the smaller companion to Pulsar J0453+155 been confirmed to be a neutron star by any further work beyond that of Martinez et al. (2015) and is it still the smallest known neutron star?

Has the smaller companion to Pulsar J0453+155 been confirmed to be a neutron star after Martinez et al. (2015) and is it still the smallest known neutron star?

The companion of J0453+1559 is still the least massive of the double neutron stars with very precisely measured masses. I cannot find any citations to the Martinez et al. paper (here is a list) that either update the mass or shed any further light on its true identity. It appears to have been accepted in the literature as a neutron star - though there is still a school of thought that it could yet be a massive white dwarf (Tauris & Janka 2019).

As you can see from the picture there are several other objects with only slightly higher masses, and some of these are pulsars and are unambiguously neutron stars (e.g. a pulsar of mass $1.251 \pm 0.021 M_\odot$, McKee et al. 2020). There are some neutron stars in X-ray binaries and with white dwarf companions that may have a lower mass; but the uncertainties could push them above J0453+1559. 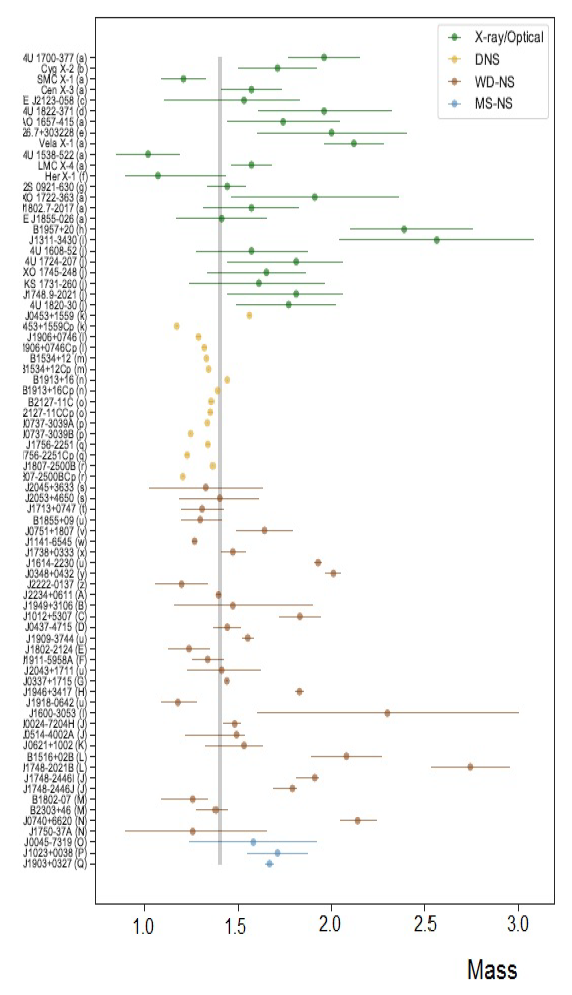 Not the answer you're looking for? Browse other questions tagged observational-astronomy neutron-star binary-star pulsar .

2
Can a neutron star ever be less than about 1.44 solar masses (the Chandrasekhar limit)? Why not?

6
How can we know the nature of the companion in a neutron star binary?
5
Could non-supernova carbon, oxygen, or silicon flashes be observed?
16
"Who saw" the binary neutron star merger first? What was the sequence of events? (GRB/GW170817)
6
How do isolated binary compact systems survive their formational supernovae?
16
What is the probability of seeing a neutron star as a pulsar?
4
Any known Triple Star Systems with this hierarchy?
4
What would a kHz gravitational wave detector look like? (mountains on millisecond magnetars) How would it differ from LIGO/Virgo?
5
What is the smallest neutron star radius possible?