Wilson effect: How "deep" are sunspots?

I recently learned about the Wilson effect of the Sun's atmosphere. The 2009 Saas Fee Advanced Course 39 states:

Near the solar limb, the umbra [the circular dark region of a sunspot] and the centre-side penumbra [the lighter border of the sunspot] disappear. We see $400-800{\rm km}$ deeper into sunspots than in the photosphere. 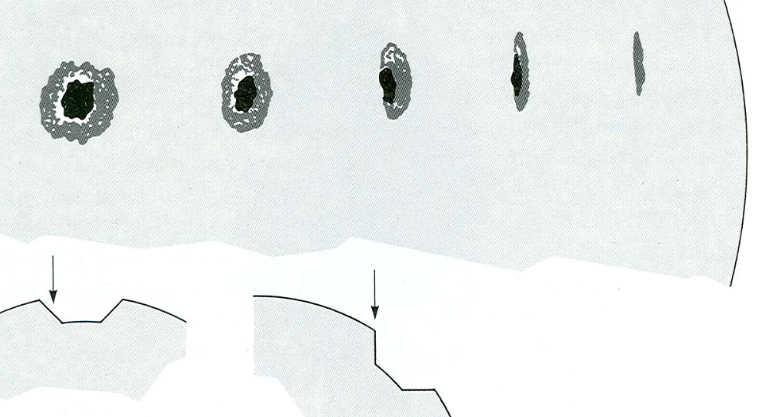 Then, there is a publication entitled The sunspot—shallow or deep? by Solov’ev and Kirichek from 2014 which says in the abstract:

Two sunspot models are compared-shallow and deep. According to the former, a sunspot, as a region occupied by a strong regular field and comparatively cold plasma, penetrates into the solar convection zone to a shallow depth of about 4 Mm. [...]

Furthermore, there is a PhD thesis by Benjamin Beeck from 2015 which shows e.g. the following graph: 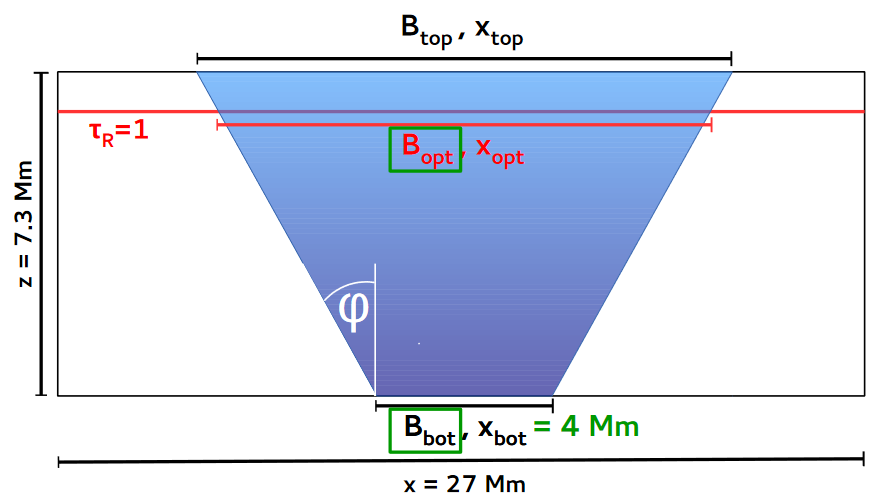 In other words, I have values between $400 \ldots 7300 {\rm km}=7.3 {\rm Mm}$ for the depths of a sunspot which confuses me slightly - I would appreciate if somebody could explain me the rather large range of depths. One the one hand, I am interested in the depth of the umbra measured from the penumbra (if it can be seen as flat), and on the other hand I also would like to know the distance from the penumbra to the end of the (visible) photosphere, everything ideally with errorbars.

Interesting questions! I hope I can shed some sunlight on them.

As stated in the abstract that you quote, understanding and modeling of sunspots is an open question, especially the question how the stability of sunspots is sustained.

There are many models, as your citations indicate. First, some terminological clarification: the "Wilson effect" nowadays is essentially a model to explain the physics of the sunspot. The "Wilson depression" is an observable component of a sunspot: the geometric height of the visible solar surface is depressed compared to the rest of the Sun. AT the time of Wilson, it was a hypothesis, but such depressions have been measured, e.g., see the figure here. In principle, since the idea is that the sunspot is generated by convective activity below the photosphere (i.e., convective heat transport is blocked by intense magnetic fields, which is why strong magnetic fields are needed to sustain a stable sunspot), the sunspot could be much deeper than what we're able to observe, since we cannot see directly below the photosphere (since the Sun's plasma becomes too opaque).

There are other models to explain the depression of a sunspot. For example, a recent model, which is (apparently) free from any systematic uncertainties due to no model-dependent assumptions, minimizes the divergence of the magnetic field derived from spectropolarimetric observations. By applying their framework to observations of a sunspot, they state:

The derived Wilson depression (∼600 km) is consistent with results typically obtained from the Wilson effect.

Their results are consistent with those of studies that employ the Wilson effect, e.g., as you cite from the 2009 Saas Fee Advanced Course 39.

I would appreciate if somebody could explain [to] me the rather large range of depths. On the one hand, I am interested in the depth of the umbra measured from the penumbra (if it can be seen as flat), and on the other hand I also would like to know the distance from the penumbra to the end of the (visible) photosphere, everything ideally with errorbars.

To produce a plot with more precise answers and with errorbars would involve somebody already made such a plot, or I would have to make one. I do not have the time to do so myself, and I cannot find a published paper with it (it could be out there). So, I'll try to explain more conceptually. Also, we cannot see below the photosphere so I think indirect methods would have to be used to obtain errorbars on observations of the depth of the umbra, which I am having trouble finding (and doubting if it's been done yet! EDIT: see the very last para. about helioseismology).

The wiki article states: "The magnitude of the depression is difficult to determine, but may be as large as 1,000 km." But it does not cite this claim ;)

Models of the Wilson effect, like those that you cite, are attempting to explain the emergence of a sunspot as originating from within the convective envelope of the stellar interior. Is that reasonable?: the depth cited of $\sim 7.3$Mm for these swells of plasma are at least within the solar radius, which is $\sim 10^9$m = 1 Gm. The photosphere is the deepest into the sun's interior that we can see optically, and it extends to about 4x10$^5$m. So it is conceivable that the sunspot can exist at depths below the photosphere inside a convective region of the sun without the bottom of the sunspot being too deep.

ADDED EDIT: In the models of Solov'ev and Kirichek, e.g., 2014, "sunspot stability [is] a function of their radius and magnetic field strength [which] varies monotonically with radius from about 700 G up to an asymptotic limit of about 4000 G. The depth of the Wilson depression grows linearly with B. The range of stable equilibria is limited in a way that larger sunspots (radius larger than about 12–18 Mm) are unstable, which may explain the absence of very large sunspot on the Sun, as well as the appearance of the light bridges in large sunspots dividing them in several parts. Sunspots with B in the range of 2.6–2.7 kG and an umbral radius of about 2 Mm are the most stable." Quote taken from Note 4. of this helioseismology review (also in last para. below), and see Figure 22 of that review for a schematic of their model.

In the thesis that you cite by B. Beeck, the main article found here, the geometry of the umbra (nor the penumbra) is NOT known a priori, so they make guesses and check with their detailed numerical simulations. They systematically vary the initial conditions, boundary conditions, magnetic field strength, and the depth of the sunspot to try to produce a physically stable sunspot. They find:

They speculate that this stability requirement may rule out sunspot geometries that are flat (i.e., not deep). They attempt to quantify this with wedge/slab geometry, where a higher magnetic field strength at bottom of the sunspot leads to lower umbral intensity and a more pronounced penumbra (see 5th slide from the end), which could be used to observationally rule out certain sunspot geometries.

ADDED EDIT: Thus, the range of scales involved here are part of an active area of research. There are many theoretical reasons to suspect that the sunspots may be deep and large, on the order of ~Mm, but we can probe into the sun only so deep, so we are usually limited to seeing only on the order of ~$10^5$ m, which is consistent with the depth of the photosphere. This results in the exact structure and depth of the umbra and penumbra being not well understood, currently, although the dependence on various parameters is well understood within certain frameworks.

Right after posting this answer I realized that helioseismology is a way of trying to get around the issue of probing deeper than the photosphere, and it seems promising! Advancements in helioseismology have long anticipated insights into the Sun's interior, for examples here and here, which has yielded comparable estimates for the depth of sunspots, i.e. $\sim$1Mm. I think this is an active area of research and will be neat to follow its development. See here for a (semi-)recent review.

Not the answer you're looking for? Browse other questions tagged the-sun stellar-atmospheres sunspots photosphere .

5
What is the lower limit of a coronal mass ejection?
5
What could be the cause of solar "campfires"?

28
Why do sunspots appear dark?
7
Are sunspots vertically displaced from the surrounding photospheric plasma?
4
How do sunspots move seen from the side?
4
Is the longitude assigned to sunspots spherical or projected?
6
Can we see evidence of sunspots on other stars? (starspots)
4
Is there a database of past sunspots?
7
What effect does stellar granulation to have on a chemical analysis of a star's spectrum?
14
How are the solar flares from May 23, 2021 extraordinary?
2
What are Ellerman bombs and how can we identify them?