Will the Sun cool only after it left main sequence?

I thought that the answer is yes, a little bit. As the sun runs out of hydrogen, then it it gets more and more contracted, increasing pressure, temperature, and therefore luminosity. This is supported by this answer saying, about main sequence stars, that:

result is that older stars a slightly hotter and brighter than younger stars.

low- and intermediate-mass stars expand and cool until at about 5,000 K they begin to increase in luminosity in a stage known as the red-giant branch. The transition from the main sequence to the red giant branch is known as the subgiant branch.

Am I right that this cooling which wikipedia mentions happens after the star left the MS, while on the sub-giant branch? (Not cooling, and then entering SGB, on the way to RGB.)

The answer is no: the Sun cools throughout its main sequence lifetime. This effect is due to the accumulation of helium ash in the core, which decreases the amount of energy released per unit volume. The decreased energy output to counteract gravity means that the core contracts under its own gravity, increasing temperatures and pressures in the core, and hence the rate of fusion. This overcompensates for the drop in fusion rate due to accumulation of helium ash, increasing the energy output of the core.

However, this increased energy output actually causes the outer layers of the star to expand, correspondingly decreasing in temperature. The surface temperature of this star thus actually drops (at least for sufficiently massive stars, I'm not too sure if there is a difference for < 1 solar mass stars). 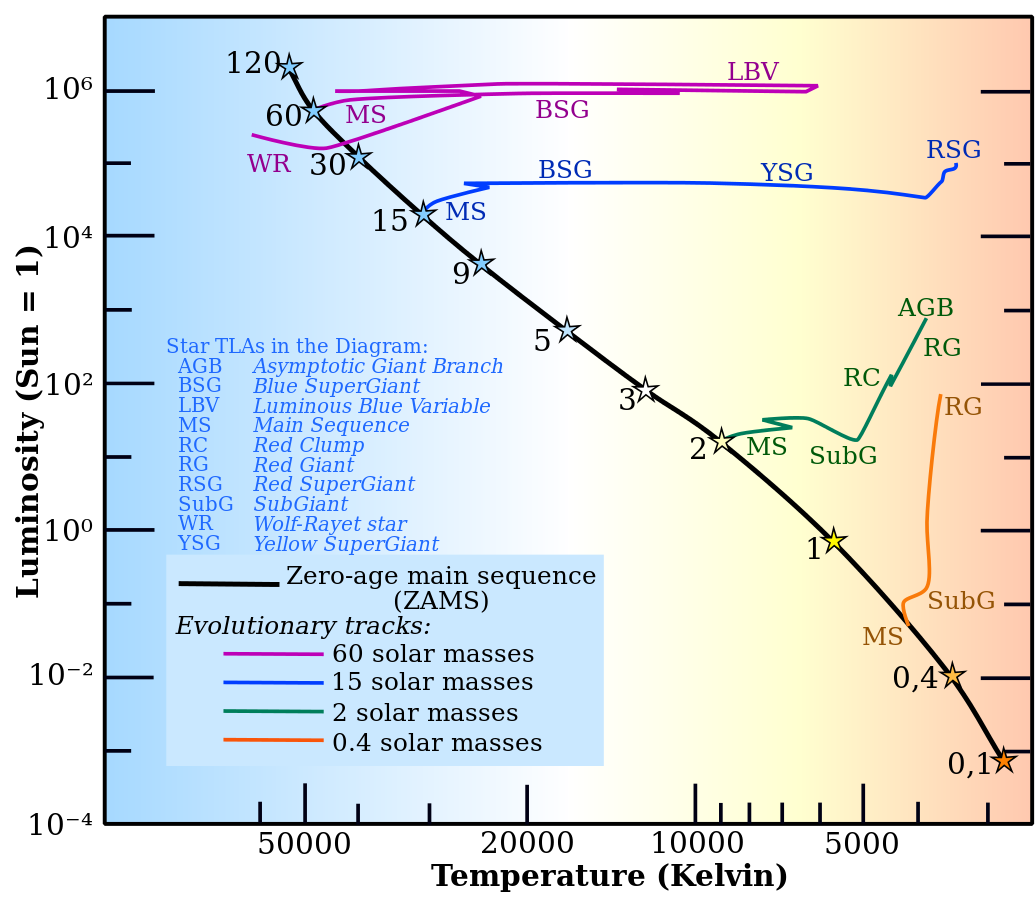 However, it should be noted that this is much less significant than the cooling (in terms of surface temperatures) in the subgiant or red giant phase, which is why it's often ignored or glossed over.

Not the answer you're looking for? Browse other questions tagged stellar-evolution or ask your own question.

26
Is the sun's volume shrinking currently?
14
Is "Main Sequence" a temporal sequence?
5
Is a branch on HR diagram a line formed by stars in the same evolutionary phase, or the evolutionary track of an individual star?

0
Putting mass-luminosity relation and Hertzsprung-Russel diagrams together leads us to a mass-age relation; so how do stars lose their mass over time?
14
Is "Main Sequence" a temporal sequence?
0
Conflicting information about the star Delta Pavonis?
1
Why does shell fusion produce more energy than core fusion?
1
Have all Wolf-Rayet stars evolved off the main-sequence?
5
Is a branch on HR diagram a line formed by stars in the same evolutionary phase, or the evolutionary track of an individual star?
2
Why do heavy mid-sized stars become more luminous as they leave the subgiant branch entering the red-giant branch?