This excellent answer to What would “the next GAIA”-like instrument be like? Could it simply be a 3 to 5x scaled-up version of the same beautiful system? is worth a thorough read-through, but it and of course the paper it cites essentially argues that the next GAIA-like instrument will more likely be moved further to NIR than be scaled-up copy of current GAIA.

The paper outlines four technologies that could be considered for the imaging sensors, since many require sensitivity well outside of silicon's bandgap limit of roughly 1100 nm.

For completeness here are all four, but my question focuses on #4 (MKIDs). 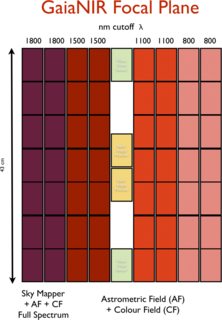 Proposed focal plane array and filter bands used in the GaiaNIR CDF study (see page 203 in https://sci.esa.int/s/8a65kZA). The array consists of 60 NIR detectors, arranged in 7 across-scan rows and 9 along-scan strips (out of which 8 are for the astrometric/photometric field, divided into 4 photometric fields (i.e. 4 different cut-off wavelengths each starting from ∼ 400 nm). The new array is less than half the size of Gaia’s

2
What would "the next GAIA"-like instrument be like? Could it simply be a 3 to 5x scaled-up version of the same beautiful system?
3
How often are electron-multiplying CCDs used in telescope focal planes? Will Nancy Grace Roman be the first use in a space telescope?

4
How will microshutter arrays be used in the James Webb and future space telescopes?