At what distance from the Sun can planetary moons exist?

Mercury and Venus are theorized to have no moons because they are so close to the sun.

Is there a theoretical distance in which moons tend to exist based on simulations?

There are several factors determining the inner limit to moons. Perhaps the simplest is that it needs to stay inside the Hill sphere, the region around the planet where the planet's gravity dominates over the sun's. If the planet's orbit has semi-major axis $a$ and eccentricity $e$ the farthest the moon can orbit is $$r_H \approx a(1-e)\sqrt[3]{\frac{m}{3M}}$$ where $m$ is the planet mass and $M$ the sun mass.

However, while this shows that in principle you can have moons extremely close to stars, in practice they are not going to occur.

The most obvious problem is that very close planets will become tidally locked to the sun, and that will make the moon spiral inward since it will dissipate orbital energy through tidal deformation of the planet. The effect becomes bigger for heavier satellites. (Barnes & O'Brien 2002) calculate the following allowed region in a 4.6 Gy old system around a 1 Jupiter mass planet: 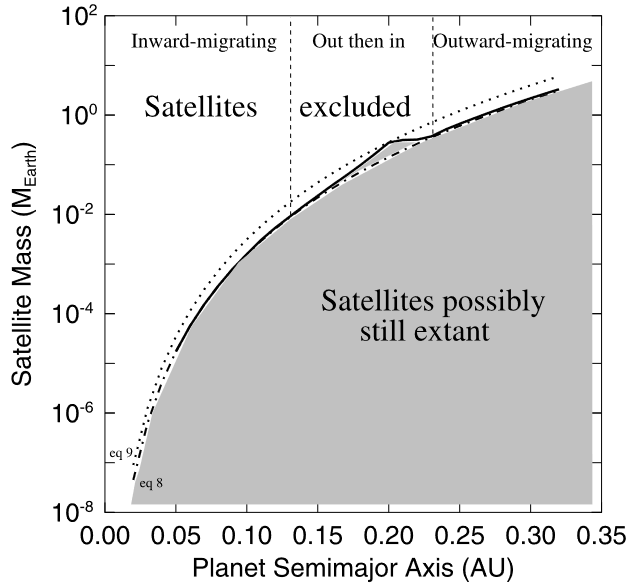 The curve scales as $m_m \propto a^{13/2} m^{8/3}r^{-5}$; for an Earth-like primary the corresponding masses have to be 2.7% of the Jupiter case (although the different tidal properties of the planets makes this estimate somewhat dodgy).

There are other destabilizing factors for small bodies close to the sun such as the Yarkovsky effect. So while a tiny moon can reside close to the sun, it will likely not remain there long.

The opposite question, if there is an outer limit to planets holding satellites, presumably can be answered negatively. Clearly there are less and less disturbances the further you go outward, and the only issue is if a planet can accrete or capture a satellite. Given the common presence of satellites around trans-Neptunian objects this seems fairly common.

Every planet whch orbits a star has an inner and outer distance between which any moons would have to orbit.

The inner distance partially depends on the characteristics of the specific moon. It is call the Roche radius or Roche limit. Any object, that is held together mostly by its gravity, like a star, planet, or moon, which passes with the Roche limit of a more massive object will be torn apart by tidal forces. The Roch elimit depends of the relative densiites of the two bodies and whether the smaller object is rigid or fluid.

Formulas for calculating the Roche limits of astronomical bodies can be found at:

The outer limit at which a moon can orbit a planet is call the Hill radius or Hill sphere. The size of the hill sphere depends on the masses of the planet and its star and the distance between them, since the stronger the gravity of the star is relative to the planet, the smaller the Hill sphere of the planet will be.

There are formulas for calculating an object's Hill Sphere at:

However, it turns out that a moon orbiting in the outer parts of a Hill sphere will not have an orbit stable for long periods of astronomical time.

The Hill sphere is only an approximation, and other forces (such as radiation pressure or the Yarkovsky effect) can eventually perturb an object out of the sphere. This third object should also be of small enough mass that it introduces no additional complications through its own gravity. Detailed numerical calculations show that orbits at or just within the Hill sphere are not stable in the long term; it appears that stable satellite orbits exist only inside 1/2 to 1/3 of the Hill radius. The region of stability for retrograde orbits at a large distance from the primary is larger than the region for prograde orbits at a large distance from the primary. This was thought to explain the preponderance of retrograde moons around Jupiter; however, Saturn has a more even mix of retrograde/prograde moons so the reasons are more complicated.3

Mercury and Venus are less massive than the Earth, and so their Roche limits are smaller, which is good for not destroying close moons.. They are closer to the Sun than the Earth, so the Sun's gravity is stronger where they orbit, and since they are less massive than Earth, their mases and distances from the Sun combine to make their HIll spheres much smaller than Earth's, which is bad for keeping moons.

But there ae other problems with Mercury and Venus having moons. The orbit of a moona round tis planet will chang eover time, as the moon moves closer to or farther from the planet. So if a moon starts out between the Roche limit and the Hill sphere of its planet, it could move out of the zone where stable orbits are possible.

Planets can also capture passing objects and make them their moons. The capture process can result in either a prograde orbit, or an orbit in the opposite direction, a retrograde orbit. Therer are a number of captured moons in the Solar System, some with prograd eorbits and some with retrograde orbits.

Triton's revolution around Neptune has become a nearly perfect circle with an eccentricity of almost zero. Viscoelastic damping from tides alone is not thought to be capable of circularizing Triton's orbit in the time since the origin of the system, and gas drag from a prograde debris disc is likely to have played a substantial role.4 Tidal interactions also cause Triton's orbit, which is already closer to Neptune than the Moon's is to Earth, to gradually decay further; predictions are that 3.6 billion years from now, Triton will pass within Neptune's Roche limit.[25] This will result in either a collision with Neptune's atmosphere or the breakup of Triton, forming a new ring system similar to that found around Saturn.[25]

So if Mercury or Venus captured a moon in an orbit retrograde to their rotation, that moon would gradually spiral down to within the Roche limit and be destroyed after millions or billions of years.

If a moon is in a prograde orbit above the synchronous orbit level, it will move away from the planet due to tidal acceleration. Thus, after millions or billions or psosibly trillions of years, it might pass outside the Hill sphere of the planet and go into orbit around their star. MOs tof the moons is the Solar System orbit farther than the synchronous orbits of their planets, and so a gradually receeding form them.

Some moons orbit their planets below the synchronous orbit level. Their orbital periods are less than one day of the planet. Those moons experience tidal deceleration and slowly spiral inward toward their planets, eventually reaching the Roche limits of their planets and breaking up.

Mercury and Venus are believed to have no satellites chiefly because any hypothetical satellite would have suffered deceleration long ago and crashed into the planets due to the very slow rotation speeds of both planets; in addition, Venus also has retrograde rotation.

For a long time astronomers believed that Mercury, and possibly Venus, were tidally locked to the Sun, with rotation periods equal to their oribital periods, so that a day would be equal toa year, and one side of theplanet would always face the Sun and the other side always face away from the Sun. That is called a 1:1 resonance. It is now known that Mercury and Venus do not have 1:1 resonances, but their rotation periods are very long compared to their years of 87.97 Earth days and 224.7 Earth days.

When the gravity of a star is too strong at the orbit of a planet - which depends on the mas sof hte star and the orbital distance of the planet from the star - that planet will become tidally locked to the Star, either with a 1:1 resonance or a resonance with simple integers, such as the 3:2 resonance of the planet Mercury - Mercury rotates three times in two Mercurian years - or some other simple resonance.

So if the mass of a star is known, the distance at which a planet would have its day greatly slowed down, thus making it hard or impossible for it to keep its moon(s) can be calculated.

And of course the shorter years of planets orbiting close to their stars is another problem for any potential moons.

The longest possible length of a satellite’s day compatible with Hill stability has been shown to be about P∗p/9, P∗p being the planet’s orbital period about the star (Kipping 2009a)

And the source is given as:

So this claims that a mooon can not have a stable orbit around its planets unless the orbital of the moon is less than one nineth (0.111111) theorbital period of the planet around the star.

So the closer a planet orbit sits star, and the more massive the star is, the shorter will be the year of the planet.

The shortest orbital period or year of any known exoplanet orbiting a main sequence star is that of K2-137b, I think, whichis only 4.31 hours long.

So if a moon of K2-137b had a stable orbt it around it, that orbit would proably have to be less than about 0.4788 hours long. Which should be far below the Roche limit of K2-137b and probably also far below the surface of K2-137b.

So it should be possible to create a formula showing how close a planet could get to a star of a specific mass and still retain a moon.

Of course there is no outer limit to how far away a planet with a moon could get from its star.

Not the answer you're looking for? Browse other questions tagged natural-satellites mathematics or ask your own question.

23
Can a natural satellite exist in a geostationary orbit?
8
Can you explain the pattern of Hill sphere sizes of the objects of the Solar system?
2
Which moons have cold traps? (i.e. low ecliptic inclination in orbital and rotational axes)
6
What colours can rocky planets (or moons) have
4
Is it possible for a planet to have multiple moons in a nearly stationary orbit?
5
How far from the Sun can an Earth TCO (temporarily captured orbiter) go after leaving?
9
Which Saturn satellite passes closest to Saturn's rings and at what distance?
24
Why do planets and satellites in the Solar system look so wildly different if they came from more or less the same matter?
4
Moons with curlicue paths around our Sun?
2
Jupiter's asteroid-like moons and planetary-systems around sub-brown dwarfs