How do you determine whether a certain object can be detected by an observatory based on coordinates?

If I am given the latitude and longitude of an observatory or observation point, how can I determine whether a given object, based on its equatorial coordinates, is observable from that observatory?

I always believe that one picture can tell more than 1000 words. So, here you have it: 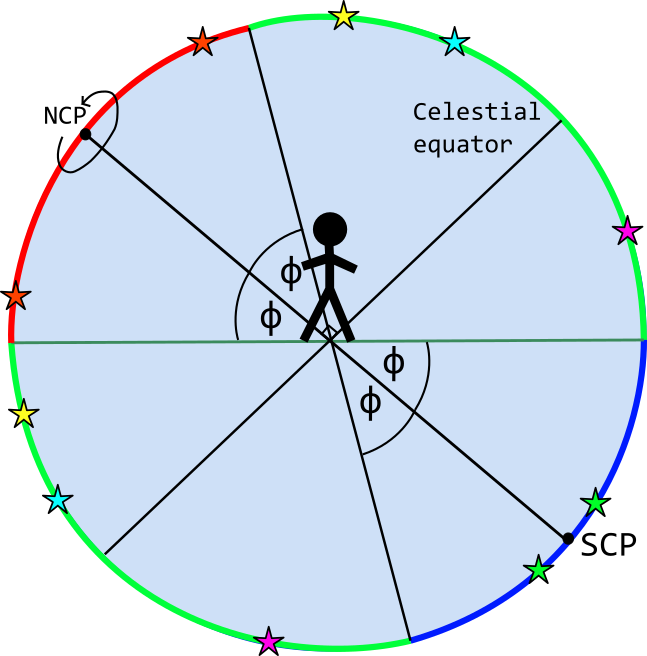 We must know only the latitude $\phi$ of the observatory.

If the declination of the star is $\delta\geq 90°-\phi$, then the star is always above the horizon, no matter what time it is. This is true for red star on the diagram; it always revolves throught its two marked positions, which are both above the green line: the horizon.

If the declination is $90°-\phi\leq\delta\geq -90°+\phi$, then the star is sometimes above the horizon and sometimes under. This is true for yellow, blue and violet star on the diagram.

Additionally, if the declination of the star is lower, it is less time above the horizon. Violet star would be just approximately 2 hours above the horizon, while yellow star is around 11 hours above it. You can use formula $\cos{h}=-\tan{\delta}\tan{\phi}$ to calculate the hour angle of the set.

If the latitude φ of the observatory is equal to or less than (90° + δ), then the object is visible at least some of the time.

In practice, though, it’s not exactly that, because light is refracted up by the atmosphere, in variable amounts depending on atmospheric pressure and temperature, making it possible to see objects further south than the formulas would say. On the other hand, objects low in the sky have their light absorbed in greater amounts by the atmosphere, as said light needs to travel through a thicker layer of air, so objects will appear fainter. Finally, there might be trees, hills/mountains, buildings, etc., in the way.

3
How do one identify something they see in the sky?
1
How can we estimate if a certain astronomical object will be visible from a place on earth?
2
How can I check if we can observe a certain star (given its equatorial coordinates) from a certain location on Earth (given its DMS coordinates)?
4
Latitude, longitude and altitude of Ckoirama Observatory; where can things like this be looked-up?
1
How are the three character IAU Minor Planet Center's Observatory Codes assigned? Why are some letters so popular?
0
Can I use the parallax coefficients for observatories as a proxy for latitude using arctan2(sin, cos)?
3
Optical Observation Calls: How and Where to apply for optical observations?