How can dark matter be observed?

Look at this picture: 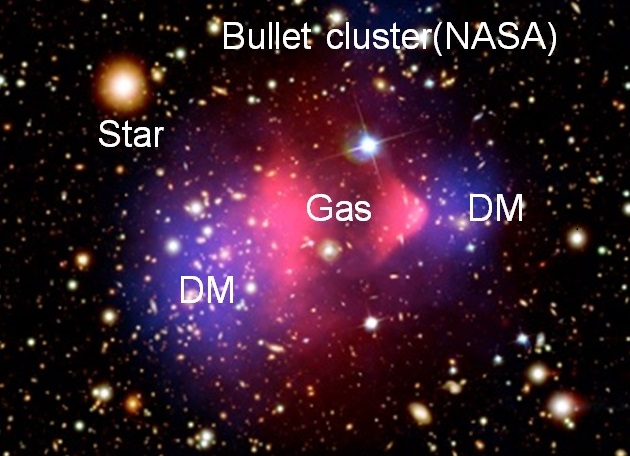 It looks as if dark matter is observed. But what is actually observed? doesn't this picture prove MOND and emergent gravity (both assuming a different gravity tied to normal, non-dark matter only) wrong?

The purple is a "weak lensing" map. To quote from the original authors:

Weak gravitational lensing is a method which can be used to measure the surface mass in a region by utilizing the fact that the path of a light bundle passing a gravitational potential will be bent by the potential. As a result, images of background galaxies which are near a massive structure, such as a cluster of galaxies, are deflected away from the structure, enlarged while preserving the surface brightness, and distorted such that they are stretched tangentially to the center of the potential. This third effect, known as gravitational shear (γ), causes the background galaxies’ ellipticities to deviate from an isotropic distribution, and the magnitude and direction of these deviations is used to measure the mass of the structure(s) causing the lensing.

So, cluster has a lot of mass. Background galaxies (those that are coincidentally behind the cluster) have their images distorted. If there was no mass, then the shapes of the galaxies would be "isotropic" one region would look the same as another. But the mass causes these to be distorted in particular directions and so presents a way to map the amount of mass. The map is created to fit the observations of the distortions of background galaxies, and this is the best fit.

Notably and significantly for dark matter is the fact that the collision of the bullet cluster has caused the visible matter to partially separate from the dark matter. So we see background galaxies being distorted by what looks like empty space! This is why it is considered good evidence for the reality of dark matter as a "thing" and not as a modification of gravity.

48
Two species of dark matter?
18
Are there any alternative explanations for the gravitational force we attribute to dark matter?
20
Could light be dark matter?
3
Is dark matter influenced by gravity of baryonic matter?
2
Relationship between Dark Energy and Dark Matter
7
Do the Bullet Cluster remnants prove that dark matter consists out of particles?