Can we learn anything from the chaotic movement of Hydra and Nix?

The NASA Visualization Explorer Moons In Chaos says Hydra and Nix, two of the moons of Pluto, show chaotic movement due to the shifting gravitational field.

How long a day lasts and where the sun rises and sets are impossible to forecast on one of Pluto’s five moons, Nix. When NASA’s Hubble Space Telescope observed odd changes in the sunlight Nix was reflecting, researchers realized that Nix does not rotate predictably like Earth’s moon. Instead, it tumbles chaotically as it revolves around Pluto. Nix’s erratic nature comes from orbiting a double planet: Pluto and its largest moon, Charon, which is about half Pluto’s size. The two swing around each other like a dumbbell with unequal weights, shifting the gravity field that Nix experiences and tugging the potato-shaped moon in different directions about its axis. The same chaos afflicts Hydra, another tiny Pluto moon. Watch the video to see an animation showing Nix’s wobbles as it orbits Pluto.

I was wondering if knowing more about their chaotic behaviour can help us advance Astronomy?

Personally, I believe we wouldn’t gain much from knowing more about their movement since chaotic movements become very different even for minute changes in the parameters.

If there are any applications or conclusions from this though, I’d like to know what they are.

Understanding what is out there in the universe, where it is, how it is moving and why is what space exploration is about.

Chaotic orbits and trajectories are very important for trajectory planning of spacecraft since one can use them for low-energy transfers. If one wanted to go to an object in a chaotic orbit it is also valuable to know that it is in fact chaotic and with what characteristics, so that one can plan an appropriate trajectory. Often the time until predictability is lost for planetary bodies is fairly long on a human or project timescale. For the moons in question the timescale looks like it is many years for their orbits, and weeks for their rotation.

I agree with your thinking as far as it goes; it is probably not possible to learn about chaos theory nor celestial mechanics by observing these moons, because:

However, we may be able to learn something about the internal structure of these moons or perhaps Pluto itself. The quoted passage mentions "potato-shaped moon" and that's a hint. I went to Wikipedia's Pluto and searched for "chao.." and at the bottom found three interesting links.

While none of these references point to a single sure thing we can learn by studying them, there is discussion of how the system evolved; how pluto came to be in the orbit it's in at the moment, and how it captured and held on to these moons. Since they are profoundly non-spherical, the evolution of their orbits will be different than for spherical moons. 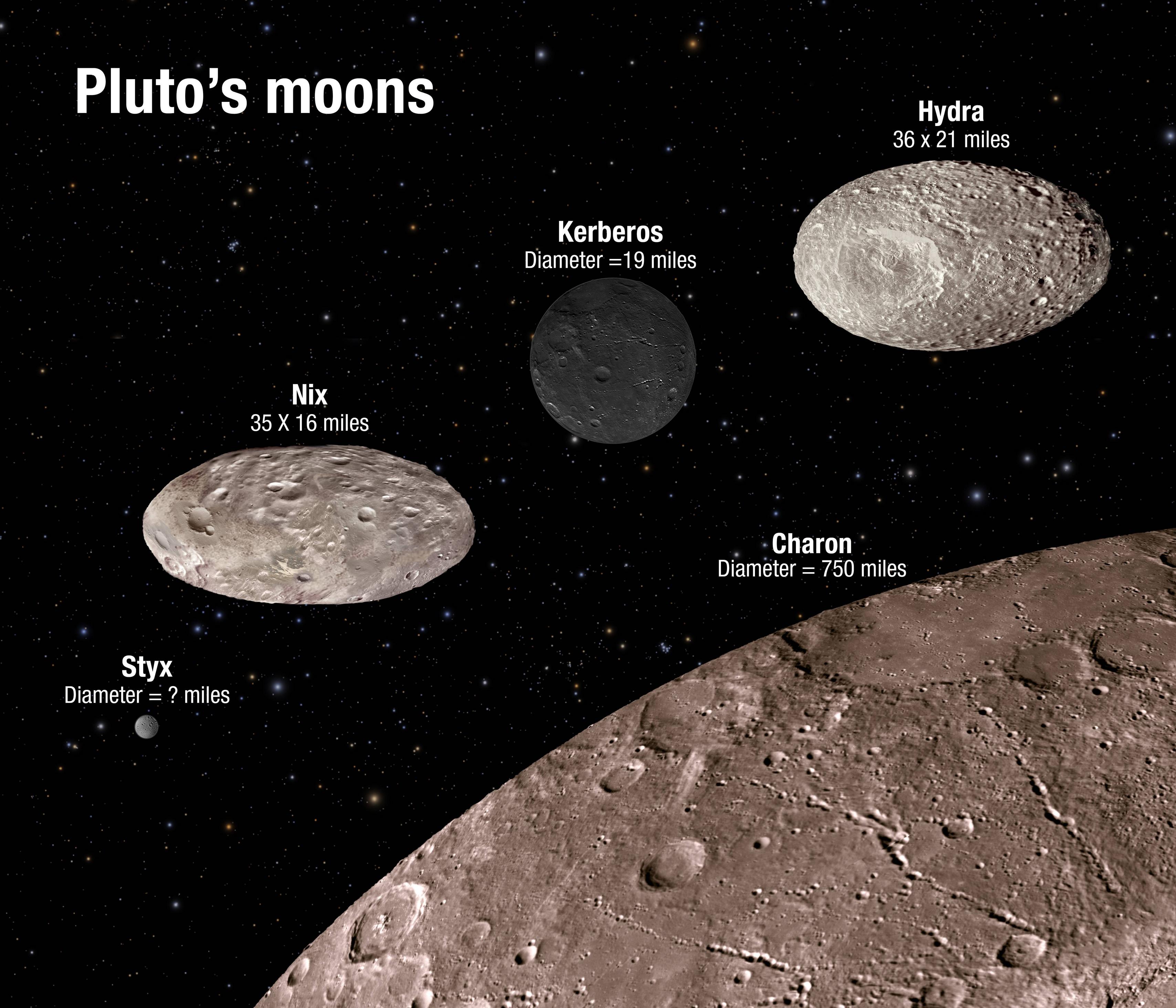 This illustration shows the scale and comparative brightness of Pluto’s small satellites. The surface craters are for illustration only and do not represent real imaging data. Credits: NASA/ESA/A. Feild (STScI)

Not the answer you're looking for? Browse other questions tagged orbital-mechanics celestial-mechanics pluto planetary-science or ask your own question.

5
Moons with synchronous rotation in our solar system

1
Can New Horizons probe turn back and start orbiting Pluto
1
Calculation of Eccentricity of orbit from velocity and radius
6
Can Eight Retrograde (seen from Earth) planets occur?
27
Where do we have it from that the Moon is migrating away from Earth?
20
Does anything orbit the Sun faster than Mercury?
33
Can Pluto be seen with the naked eye from Neptune when Pluto and Neptune are closest?
4
Why are solar systems stable and not chaotic?