Does the ecliptic plane change relative to the galactic plane?

As mentioned by James K in this answer, the inclination of the ecliptic plane to the invariable plane of the Solar System varies by ~3°, over a very long time scale.

The invariable plane itself is very stable relative to the International Celestial Reference Frame (ICRF).

The ICRF creates a quasi-inertial frame of reference centered at the barycenter of the Solar System, whose axes are defined by the measured positions of extragalactic sources (mainly quasars) observed using very long baseline interferometry.

Although general relativity implies that there are no true inertial frames around gravitating bodies, the ICRF is important because it does not exhibit any measurable angular motion since the extragalactic sources used to define the ICRF are so far away. The ICRF is now the standard reference frame used to define the positions of the planets (including the Earth) and other astronomical objects.

As Wikipedia mentions, the invariable plane is perturbed due to the anisotropic loss of material from the Solar System, and the radiation of gravitational waves. It's also affected by torques exerted by neighbouring stars. But all of those perturbations are minute. 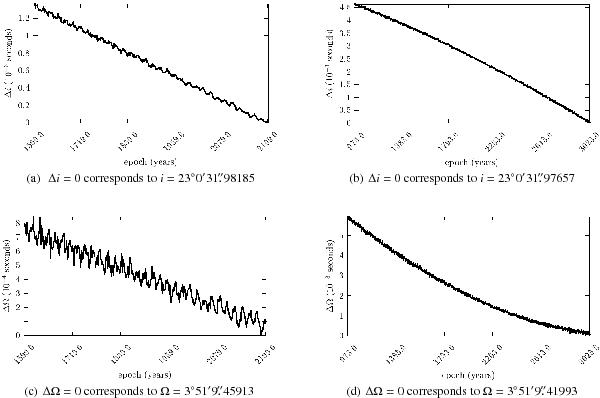 That paper is fairly technical, and hopefully I haven't misinterpreted it. ;)

3
What is the magnitude of variation of Earth's orbital inclination?
3
Why does the axis tilt (obliquity) of Earth change over time?
3
What's the angle between the sun's galactic speed and the ecliptic?

3
How to get the axial tilt vector(x,y,z) relative to ecliptic
0
Does the ecliptic precess? Does the Sun's rotation precess?
9
How does the earth's plane of orbit (ecliptic) vary over time?
3
nodal precession: earth's orbit of sun
3
Is the equinox Sun always at the same zodiac sign in the ecliptic belt?
2
How can the oblateness of Earth impart torque to change the longitude of ascending node of a satellite?
7
Why aren't there eclipses every month when the moon's orbit is aligned with the ecliptic as a result of lunar precession?
4
How to calculate the nodal precession range of the Moon with respect to the celestial equator?
3
How the "precession of the ecliptic" can be distinguished from the "precession of the equator"?