How do astronomers calculate the period about the wave motion of the solar system in the Milky Way? 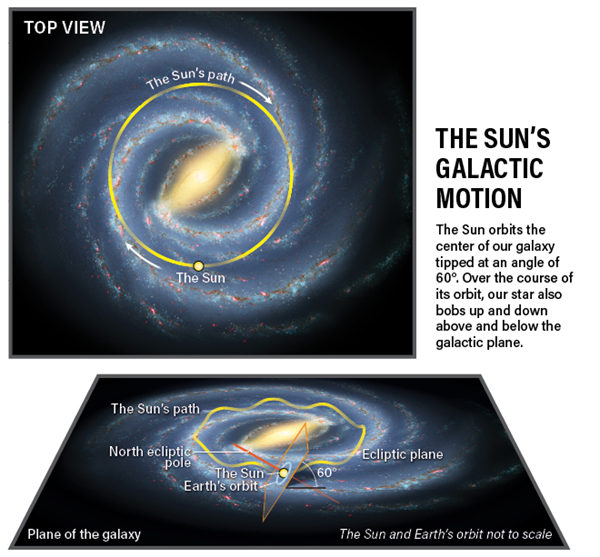 How did the astronomers calculate the period? How did they find the highest and lowest point of the path?

I can understand the wave's path of the solar system due to the mass of the galaxy, I'm just curious how to calculate it.

The motion of the Sun in the direction perpendicular to the Galactic plane is deduced from a mixture of measurement and theoretical calculation.

From there it is a relatively simple application of Newtonian mechanics to work out what the motion of the Sun will be in the future (and where it came from in the past). The solution is an oscillatory motion above and below the plane with an amplitude of about 100 pc and a period of 70 million years.

A flavour of the calculation can be done analytically using some simple approximations.

Thus, when a star (e.g. the Sun) has $|z|>0$, there is a restoring acceleration that acts towards the Galactic plane at all times.

The stellar mass density near the Galactic plane is something like $0.1M_\odot$ per cubic parsec. This gives an oscillation period of $\sim 100$ million years. A more accurate calculation gives more like 70 million years.

To estimate the amplitude of the motion requires a measurement of the current motion of the Solar System with respect to the galactic plane. This is currently estimated as about 7 km/s directed out of the plane and the Sun is currently about 20 pc above the plane (see here). Again, assuming simple harmonic motion, then the sum of potential and kinetic energy is constant $$\pi G \rho_o z^2 + \frac{v^2}{2} = {\rm constant}\ .$$

Substituting $z=20$ pc and $v= 7$ km/s we find a constant of $2.5\times 10^7$ J/kg. Then setting the speed to zero this is the potential energy per unit mass at the highest/lowest point of the oscillation, which yields an amplitude of 136 pc.

Not the answer you're looking for? Browse other questions tagged solar-system milky-way or ask your own question.

26
How far is the Earth/Sun above/below the galactic plane, and is it heading toward/away from it?