Will we ever be able to see the surface of exoplanets directly?

When exoplanets are depicted, artist's impressions are used. The presence of exoplanets is observed by a dip in the emitted power of a star when a planet moves between us and the star (a kind of star eclipse). I'm not sure if the planets themselves can be observed let alone their appearance.
Will we, in principle, be able to see them one day like we can see Jupiter or Saturn? Light coming from the exoplanet is "scarce" in the first place. Then it diverges when it flows into space. Now scarcity is no obstacle if an object and the observer have no relative velocity. But the Earth and the exoplanet have one. The moments photons arrive correspond to different points in space. For a bright object like the sun, this is no problem, as a huge number of photons arrive at closely spaced points. But isn't this of importance for deep space objects like an exoplanet? Can we even observe them directly (by means of poton collection over time)?

Will the light coming from such a planet not be too much spread over the huge spherical surface surrounding the planet (and including the Earth)? Can we in principle see the extent of an extended object that far? 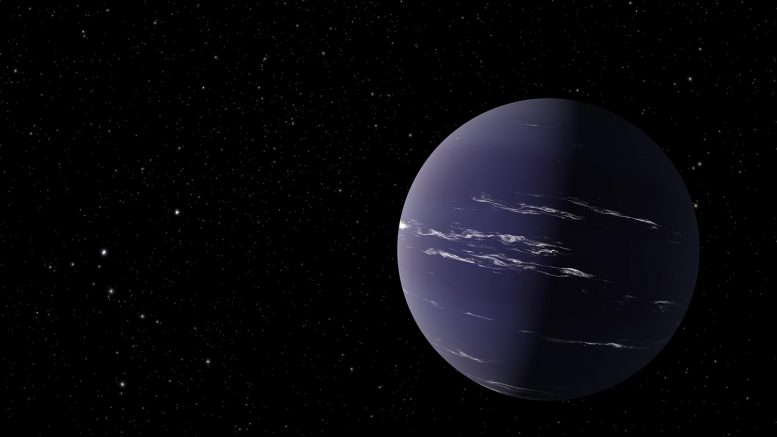 It's about 90 lightyears away (see this video). Will people ever be able to see it directly (from Earth)?

To see an exoplanet "directly" requires us to (i) be able to separate it from the contrast-destroying presence of the host star it is orbiting and (ii) to be able to spatially resolve the disc of the planet.

The first of these criteria certainly is possible and is already routinely done for exoplanets that are in wide orbits around their parent star. Advances in adaptive optics and larger space telescopes will mean that the ability to image closer-in planets will continually improve.

The second criterion is more difficult. A Saturn-sized planet at a distance of 90 light years has an angular diameter of about $10^{-8}$ degrees.

The angular resolution of a telescope (roughly speaking, its capability to form separate images of two closely separated objects) is given by $\sim \lambda /D$ in radians, where $\lambda$ is the wavelength of observation and $D$ is the telescope diameter.

Could this every happen? I would say that a single mirror of this size is very unlikely to be built any time soon. However, there are more possibilities using interferometric reconstruction of an image using an array of telescopes that can be used to get an equivalent resolution by distributing the members of the array over an equivalent diameter and then combining the signals; either in real-time or off-line.

At the moment, the technical challenges of doing "optical interferometry" are such that using baselines of more than a few tens of metres is extremely difficult. However, I would expect that a lot of these technical challenges can be overcome, especially if the array is launched into space (where the problem of the Earth's atmosphere is removed).

So my conclusion is - not in the near future, but my guess would be that we will have something more than a single pixel image within 20 years.

NB: When you source says "Saturn-like" it almost certainly is just referring to the diameter of the planet, which can easily be estimated by looking at what fraction of the starlight, from the star it is orbiting, is blocked during a transit. There are some spectroscopy measurements that might tell you the basic colour of the exoplanet and may indicate that it has clouds but no indication that it has rings.

This kind of question is a bit speculative since we can't predict the future. But humanity has come up with many ways to do something that seemed impossible in the past, as @PierrePaquette said. Probably we will image first some near exoplanets, but the images won't be great, like the resolution of 2×2 pixels. But with some advanced techniques, we could do this. I also believe that in some more years, we could also travel to some of them and take images. (We could travel whole universe in one lifetime because of special relativity and time dilation. But that would be cheating, you said from Earth.) So yes, I can say with a large amount of certainty that we will image exoplanets one day. But of course, something unpredicted can happen and this won't happen (like an asteroid falling on the Earth :).

They can know it pretty easily. They just observe the magnitude of the star, and the change of magnitude in dip. They can determine the radius of a star and the size of the planet. The orbital elements like radius are easily calculated. From spectra, they can also determine the chemical composition of planet's atmosphere. Thus, they can even predict the temperature on the planet. Astronomers say that a planet is Saturn-like only, if planet's size is approximately same as Saturn's. They can make an illustration from the before mentioned information.

Not the answer you're looking for? Browse other questions tagged exoplanet deep-sky-observing or ask your own question.

5
What's still needed before we can observe orbits of exomoons thereby weighing exoplanets?
4
What kinds of technologies are required to directly image exoplanets
4
What exactly would the resolution of an exoplanet hypothetically imaged by using the Sun as a gravitational lens be?
3
Is it possible to build a ground-based telescope that can directly image Earth-like planets orbiting in the habitable zone of sunlike stars?

17
What is the current accepted theory for the fate of hot Jupiters?
15
When will we be able to detect Earth-sized exoplanets?
6
Is Earth's 1g solid surface gravity unusually high for exoplanets?
4
What kinds of technologies are required to directly image exoplanets
3
Capability of observing transits with terrestrial telescopes of various sizes?
9
Was the discovery of six exoplanets around one star as "easy" as counting six peaks in the FT?
3
Guess inclination angle from radial velocity measurements
4
Detecting habitable planets
2
Could an Earth-like magnetic field protect life at exoplanet Proxima Centauri b?