Why doesn't the Sun wobble towards Jupiter instead of away from Jupiter?

This is the page I am referring to. It seems counterintuitive to me that the Sun should be on the opposite side of the barycenter's wobble. I realize I am wrong, but I cannot see why I am wrong. Can someone explain why the wobble is away from Jupiter, not towards Jupiter?

Here is an unedited screenshot of the NASA animation - it shows the sun on the opposite side of the green line (barycenter) as Jupiter. 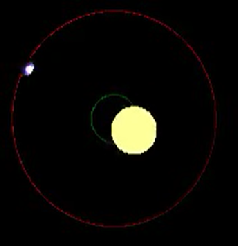 My logic says, since gravity is in play here, the Sun and Jupiter should be on the same side of the green line. I have edited NASA's image in MS Paint to show what I think should be happening: 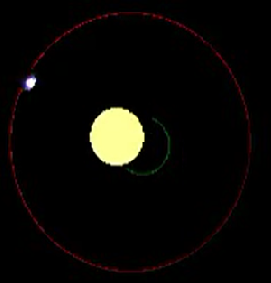 The part of your intuition that is correct is that Jupiter pulls the Sun towards it. The problem is that "pulls towards" does not mean "brings closer"! The gravitational force results in an acceleration towards an attracting body, which is not a displacement or even the derivative of displacement, but the second derivative of displacement. Oscillatory or circular motion has the property that the second derivative carries a minus sign. For example, when the Sun is on the right side of the green circle, its acceleration is to the left, because it is changing from rightward motion to leftward motion. Thus, by being on the opposite side from Jupiter, the Sun is continually accelerating towards it.

Two massive bodies always rotate around a stationary point between them. They rotate on opposite sides of this point (the center of the green and red circles). So they can't both be on the same side of this point rotating in tandem. Their momenta are always opposite.

To be a bit more specific: from where would the force come to make both rotate around the barycenter (center of mass) on the same side? The barycenter is not a point with mass in it (though it might sound so). It's a point between two masses. It's always the closest to the highest mass (or even inside it). Only when the two masses are equal then this point lies exactly between the two masses (that is, between their own centers of mass).

The barycenter, by definition, is located between the centers of two bodies.

Your second picture would have the barycenter on the far side of the sun's center opposite Jupiter's.

The short answer is angular momentum, which for whatever reason was created at the very beginning of the solar system, would not change without the existence of external force. Therefore Jupiter will rotate with the Sun around their common center of mass forever (ideal case) as long as no other objects collides with Jupiter to annihilate its angular momentum around the Sun.

Not the answer you're looking for? Browse other questions tagged the-sun gravity jupiter .

22
Is the moon moving further away from Earth and closer to the Sun? Why?
12
Why doesn't the sun pull the moon away from earth?
9
Are planets moving away from the sun?
2
Why doesn't Jupiter increase the chances of an asteroid to strike the Earth?
3
How to correctly create planetary orbits from kepler elements
3
Why doesn't the Sun explode?
5
How does the Sun orbit the Sun-Jupiter Barycenter?
9
Why doesn't the fusion process of the sun speed up?
12
Is Jupiter warming the Earth? (Earth, Sun Jupiter system)