What are Ellerman bombs and how can we identify them?

Have you ever heard about Ellerman bombs? Spaceweather.com talks about them on their news page. You could see some of them around sunspot AR2835: 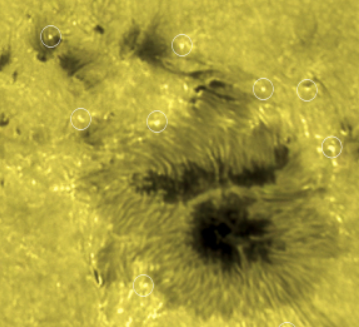 Ellerman bombs are magnetic explosions about one-millionth as powerful as true solar flares. They are named after physicist Ferdinand Ellerman who studied the tiny blasts in the early 20th century. Of course, "tiny" is relative. A single Ellerman bomb releases about $10^{26} {\rm ergs}$ of energy--equal to about 100,000 World War II atomic bombs.

My question: Is the term Ellerman bombs really used widely used? Is there a commonly accepted definition? Also: How exactly have their locations been identified in the picture above?

Interesting questions! I'm not sure if I can answer your questions fully, but I'll share what I know and have found.

In the field of heliophysics, the phrase "Ellerman bomb" is more or less widely used, in the sense that various approaches to understanding the phenomenon use the term. For some examples, there are studies that try to interpret observed solar activity as Ellerman bombs (EBs): here studying magnetic reconnection, and here studying UV bursts, and here they interpret the "rapidly flickering, flame-like features that appear intermittently in the wings of the Balmer Hα line... that outline the magnetic network" as EBs. Just a few examples among a rich literature that is still active and has been for decades. And here where they study the dynamics of EBs in the context of sunspot dynamics and they observe three EBs.

I found that sometimes they are referred to as "moustaches" of sunspots ;) (e.g. see the conclusion section of here.)

Is there a commonly accepted definition?

The current paradigm for understanding the emergence of EBs (and sunspots and other solar surface phenomena in general) is magnetic reconnection in the solar atmosphere, which was greatly bolstered by the advent of direct imaging techniques, e.g., the Hi-C observations and subsequent studies (circa 2012).

Also: How exactly have their locations been identified in the picture above?

More fully, time sequences of H$\alpha$ and infrared are used to obtain magnetic field information of the region of interest, and other information, e.g., polarimetry, are obtained. Then correlations between the magnetic field structure and polarimetry are searched for, which, if found, can be used to more precisely identify the mini-sunspots known as EBs. At the spaceweather.com site the image in the OP is from, they provide another image that helps illustrate this:

In trying to explain the EBs, they are usually explained as points of magnetic reconnection near a sunspot that are less intense and smaller in extent than the sunspot. Typically, i.e. the abstract of this, the EBs are observed to form in magnetic field configurations with close and opposite polarimetry, which is suspected to be a point of magnetic reconnection in the low solar atmosphere.

Not the answer you're looking for? Browse other questions tagged the-sun magnetic-field definition sunspots .

5
What could be the cause of solar "campfires"?

12
How can only 1 magnetic pole of the Sun change at a time?
4
What exactly are infrared dark clouds and what is the significance of the orientation of their magnetic fields?
16
Are there neutron stars whose magnetic axis and rotating axis are the same, and if so what will happen?
5
What is the completeness of an observation and how do I calculate it?
14
How are the solar flares from May 23, 2021 extraordinary?
8
Wilson effect: How "deep" are sunspots?
4
What is the difference between the terms collision and merger? How are they used differently in Astronomy?
5
How big is the galactic magnetic field in the solar system and how can we measure it?