Are Brown and Sub-Brown Dwarfs secretly more common than stars?

The answer to your first question is (now) fairly simple: No, brown dwarfs are not more common than red dwarfs. A crude approximation is that stars (which are indeed mostly red dwarfs) outnumber brown dwarfs 4 or 5 to 1; see, for example, the review article by Chabrier et al. (2014). This is supported by extensive surveys done in the 2000s and 2010s, including observations with the WISE telescope; these are sensitive enough to uncover quite faint brown dwarfs.

Empirically, attempts to count stars and brown dwarfs in local volumes strongly suggest that stars outnumber brown dwarfs. For example, Reylé et al. (2021) combine Gaia observations (sensitive to hydrogen-burning stars and the more massive brown dwarfs) with literature observations of brown dwarfs using IR telescopes (Spitzer, WISE) to make a census of different objects within 10 pc (33 light years) of the Sun. They find a total of 355 (hydrogen-burning) stars -- including 276 M dwarfs --, 20 white dwarfs (formerly hydrogen-burning), and 85 brown dwarfs (plus 3 more candidates). They do note that there are probably more brown dwarfs waiting to be identified, though these would have to be at the very low-mass (and thus low-luminosity) end. One can still argue that stars outnumber brown dwarfs in our local volume by about three or four to one.

It is true that lower mass stars tend to be more common than higher mass stars. However, this trend becomes weaker for lower masses. The figure below (from the Wikipedia article on the initial mass function (IMF) of stars, which tells you how many stars of a given mass are born, as a function of mass) shows several different versions of the IMF. The best current measurements are encoded in either the "Kroupa01" or "Chabrier03" curves, all of which show that the curves flatten -- or even turn over -- for very low masses. This means that if you add up all the brown dwarfs and add up all the stars, you end up with more stars than brown dwarfs.

Edited to add: Empirical counts of stars and brown dwarfs in the local volume. 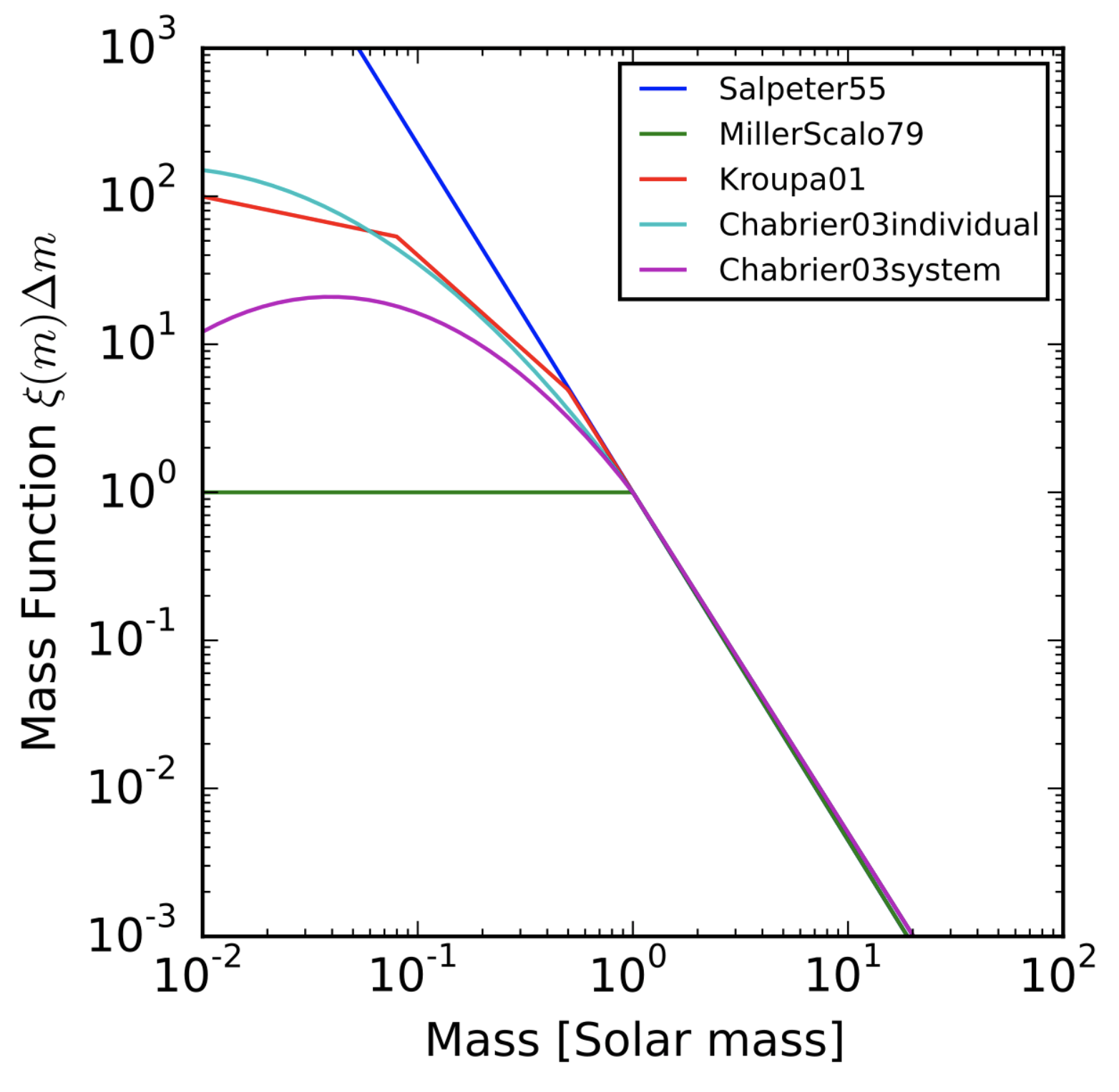 This is an important question to ask about the initial mass function of objects in the Galaxy - and the final answer hasn't been cast as it is a matter of research.

Yet, observational data (e.g. see the mass functions for various clusters in this talk), and simulations in more or less good agreement with that (e.g. here or here), seem to indicate that this so-called brown dwarf desert is real and that we talk about fundamentally different formation mechanisms between stars and planets. Yet this doesn't mean that no such objects exist nor do we completely understand the causes for these observational findings. One thing playing a role here could be that there is a lower limit to the Jeans mass (or rather density) which you will not pass for a single star / brown dwarf by fluctuations in a collapsing gas cloud due to thermodynamics - which seems to be around the Brown dwarf mass.

Just recently there have been attempts to get a better handle on some Brown Dwarfs by help of transit detection (e.g. see here) which allows to constrain its parameter much better than before.

According to the wiki article on sub-brown dwarfs, the lowest mass object that can form from collapse of gas cloud is about 1 Jupiter mass.

Not the answer you're looking for? Browse other questions tagged nebula brown-dwarf rogue-planet red-dwarf protostar or ask your own question.

7
Mechanism for Brown Dwarf Fusion
4
We are sure that there are no brown dwarfs closer than ______
0
Is it possible to have a star orbiting around a brown dwarf?
2
How do I understand a brown dwarf with a M-type spectrum?
6
Are brown dwarfs which don't sustain any fusion considered stars?
10
Existence of planets larger than their host star?
1
Can red dwarf stars have a spectral type of L?
5
How do we know that 2MASS J0523-1403 is a red dwarf?