What type of spectrum does the Wolf-Rayet star WR137 have? 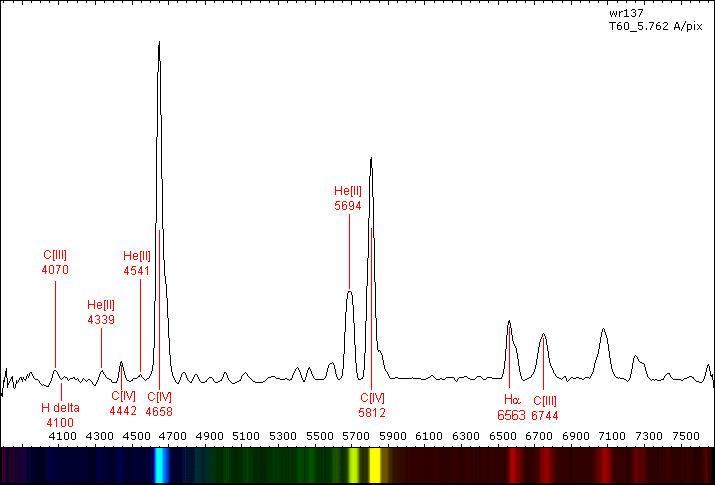 Is it an Emission Spectra or an Absorption Spectra?

I think that it's an absorption spectrum, but then why is the light intensity curve focused on elements that should not be in the star in this case, like the carbon at position 4658?

PS: I do not study physics or astronomy or anything like that :)

Some spectra are complicated and can have both! For example, quasars can have emission spectra with "intervening" absorption lines due to either intervening interstellar gas in our galaxy or due to intergalactic gas along the line of sight to the quasar.

Wolf-Rayet stars are a complicated phenomenon. They are a class of stars that are broadly characterized as having little hydrogen in their spectra (i.e., the small emission line for H$\alpha$ in the OP's figure), and are dominated by strong emission lines corresponding to helium, nitrogen, carbon, and oxygen. The other trace elements in their spectra determine the type of WR star it is: nitrogen, carbon, or oxygen dominated, or some mixture.

Some Wolf-Rayet stars experience very intense stellar wind mass-loss, and hence are surrounded by a nebula of gas being expelled from the stellar surface. This nebula can cause absorption lines in Wolf-Rayet spectra, similar to the case of quasars. For example, WR 124.

Not the answer you're looking for? Browse other questions tagged spectra or ask your own question.

3
How do we know which elements are in a galaxy spectra?
2
How do I understand a brown dwarf with a M-type spectrum?
2
Spectrum of star
3
Is there a far away probe that has recorded the light spectrum from Earth as if it were an exoplanet?
3
When examining an exoplanet's atmosphere is the star's emission spectra or planet's light used?
8
Why doesn't the Sun produce an emission spectrum?
2
Question regards to Kirchhoff’s Laws (of spectroscopy)