Why is there a mountain inside the Herschel crater on Mimas?

If the Herschel crater was caused by an impact, why does it have a mountain at its very center, its peak up to 5 mi (8 km) in elevation?

In the extreme energy of a large impact, the rock behaves like a liquid (It isn't actually completely melted, though some is. The extreme forces cause the rock to flow). As the impactor hits the moon, rock is pushed out, and since it is surrounded by relatively solid rock, it is pushed up.

Then gravity takes over as the rock that has been pushed up now pushes back down. This forces rock to flow towards the centre of the crater. And again, in the centre, there is nowhere to go but up. Once the rocks have settled they act as solid rock again, and the central peak (and crater edge) are preserved. This is seen not only on Mimas, but on many other large craters.

You can see this effect when something falls into water. Water splashes back forming a central peak.

I've noticed this before, too. My non-professional assessment is that it is a viscoelastic response to the impact, where the energy of the impact temporarily transforms the surrounding geology into a viscoelastic material. The central peak is essentially a rebound product of the impact.

I'll venture that the peak of molten material solidified before it could collapse back to the floor of the crater.

This ice crater and even the existence of this solid ice moon so close to Saturn are both still puzzles! 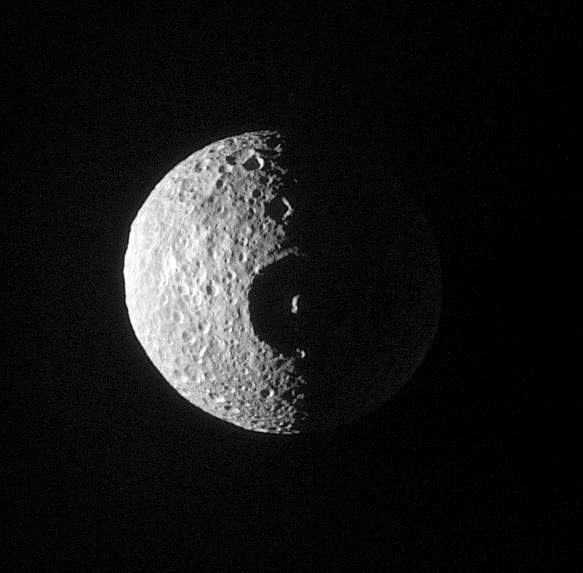 With a density of only about 1.15 g/cm^3 Mimas is thought to be mostly ice, but mixed with other material.

The other answers address basic mechanisms that can make peaks in the centers of craters, but it's important to remember we're talking about mixtures of dirty ice and liquid water rather than molten rock.

Its most distinguishing feature is a giant impact crater – named Herschel after the moon's discoverer – which stretches a third of the way across the face of the moon, making it look like the Death Star from "Star Wars." The Herschel Crater is 80 miles (130 kilometers) across – one third of the diameter of the moon itself – with outer walls about 3 miles (5 kilometers) high and a central peak 3.5 miles (6 km) high. The impact that blasted this crater out of Mimas probably came close to breaking the moon apart. Shock waves from the Herschel impact may have caused the fractures, also called chasmata, on the opposite side of Mimas.

That Mimas appears to be frozen solid is puzzling because Mimas is closer to Saturn and has a much more eccentric (elongated) orbit than Enceladus, which should mean that Mimas has more tidal heating than Enceladus. Yet Enceladus displays geysers of water, which implies internal heat, while Mimas has one of the most heavily cratered surfaces in the solar system, which suggests a frozen surface that has persisted for enough time to preserve all those craters. This paradox has prompted the "Mimas Test" by which any theory that claims to explain the partially thawed water of Enceladus must also explain the entirely frozen water of Mimas. 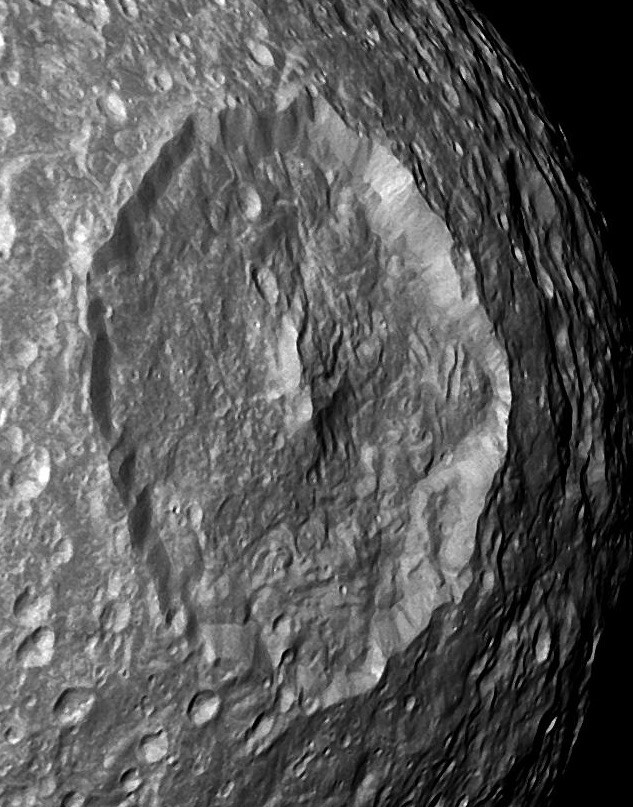 In this view captured by NASA's Cassini spacecraft on its closest-ever flyby of Saturn's moon Mimas, large Herschel Crater dominates Mimas, making the moon look like the Death Star in the movie "Star Wars."

Herschel Crater is 130 kilometers, or 80 miles, wide and covers most of the right of this image. Scientists continue to study this impact basin and its surrounding terrain (see PIA12569 and PIA12571).

Cassini came within about 9,500 kilometers (5,900 miles) of Mimas on Feb. 13, 2010.This mosaic was created from six images taken that day in visible light with Cassini's narrow-angle camera on Feb. 13, 2010. The images were re-projected into an orthographic map projection. This view looks toward the area between the region that leads on Mimas' orbit around Saturn and the region of the moon facing away from Saturn. Mimas is 396 kilometers (246 miles) across. This view is centered on terrain at 11 degrees south latitude, 158 degrees west longitude. North is up. This view was obtained at a distance of approximately 50,000 kilometers (31,000 miles) from Mimas and at a sun-Mimas-spacecraft, or phase, angle of 17 degrees. Image scale is 240 meters (790 feet) per pixel. 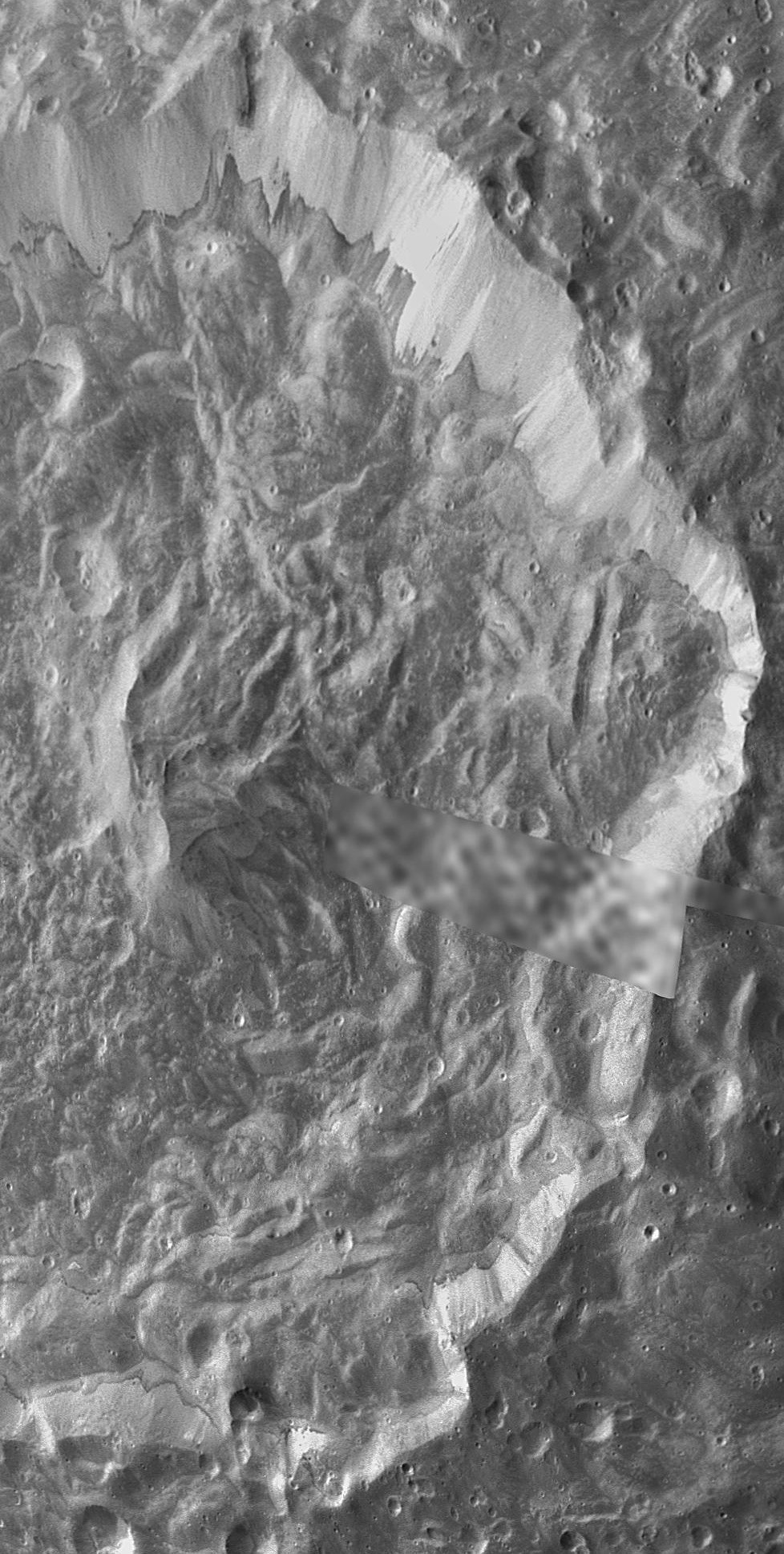 Relatively dark regions below bright crater walls and streaks on some of the walls are seen in this mosaic of Saturn's moon Mimas, created from images taken by NASA's Cassini spacecraft during its closest flyby of the moon. The crater floors and surroundings are about 20 percent darker than the steep crater walls in this view.

Mimas' original surface, like the surfaces of most of the other major Saturnian moons without atmospheres, is not pure ice but contains some dark impurities.

The relatively dark markings appear along the lower portion of the walls of Herschel Crater (130 kilometers, 80 miles wide) and some of the smaller craters and are marked in green in the annotated version of the image. Cassini scientists interpret this darkening as evidence for the gradual concentration of impurities from evaporating icy materials in areas where the dark impurities slide slowly down the crater wall. There, the bright ice is baked away by the sun and the vacuum of space. At Herschel, the edge where the darker regions contact the crater floor is interrupted by an extensive hummocky area. Scientists believe the hummocky texture came from the flow of melted ice that occurred during the impact that created the crater. That melt filled the bottom of the crater around the central peak.

Dark streaks are seen making their way down the sides of some craters (marked red in the annotated version) and often originated from pockets of dark contaminants embedded just below the rim of the crater wall. The pockets themselves likely represent small, pre-existing, dark-floored craters that were buried by the blanket of material thrown out from the newer impact that created the crater rim. The material from newly exposed dark layer eventually moves downslope and forms a streak. Streaks sometimes are seen starting from the floors of smaller dark-floored craters perched along rims of larger craters.

Not the answer you're looking for? Browse other questions tagged natural-satellites saturn crater or ask your own question.

5
Age of Occator Crater
1
If Venus had moon before and it fell back to Venus, why don't I see a unique, very big crater?
9
Why do Uranus' and Pluto's moons orbit the equator? What makes a moons' inclination tilt with the rotational axis of their planet?
3
What are the craters on the moon with peaks in the middle of them?
17
How would the Tycho Impact have appeared from Earth?
5
Is the boulder on the peak of Tycho Crater the core of the impactor, or is it a random rock?
2
The dominance of Gravity vs Strength and its dependency on crater size
3
Age of Jezero crater on Mars
4
What caused these strange craters on Hyperion?
1
Elongated Moon crater statistics?