How to extract galaxy spectra for different radii in Python for spectra taken by long slit spectrograph?

I am trying to extract the kinematics from the elliptical galaxy NGC 4697 using the Fourier Correlation Quotient (FCQ) algorithm described by Bender (http://adsabs.harvard.edu/full/1990A%26A...229..441B). I am working with the stellar spectrum of the K3-III star hd132345 as template and the galaxy spectra along the major axis of NGC 4697. Both spectra were taken by a long slit spectrograph. I have implemented a first version of the FCQ algorithm, my current problem is that I am not completely certain how to extract the galaxy spectra for different radii (I am new to working with astrophysical spectra in fits format). Underneath I will show my first lines of code for the data acquisition.

Plotted flux_gal over loglam_gal and flux_temp over loglam_temp looks as follows (spectra are rebinned in loglam). The redshift has not been removed yet. I was wondering why the absorbtion lines of the template are broader then those of the galaxy, since it actually should be the other way arround.

The header of my galaxy fits file: 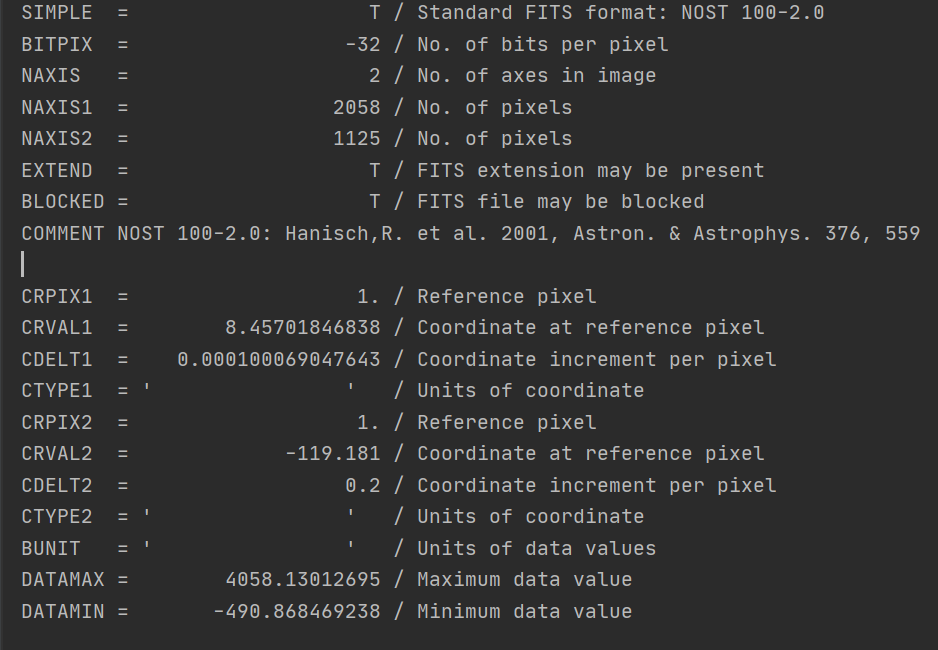 I understand that the keywords CRVAL1 and CRVAL2 describe the initial values for ln lambda in A and the radius in arcseconds. While CDELT1 and CDELT2 describe the increments ln lambda and the radius. So I should have a spectrum for my galaxy every 0.2 arcseconds. I am unsure how to extract those from my input fits files and would be very happy about a respond. Do I have to shift my galaxy spectra for all radii to the rest-wavelength frame, or can I somehow do it all in advance, since the redshift for all radii should be the same. I would be pleased about any tips or comments on this issue.

Thanks to Peter Erwin's comment, the results now look as follows. The entire 2D-image spectral image of NGC-4697 along the major axis (displayed with SAOImage):

I was wondering why the absorbtion lines of the template are broader then those of the galaxy, since it actually should be the other way arround.

You are correct that it should be the other way around. The reason the plot looks confusing is that you are not actually plotting the galaxy spectrum in the top panel; you are plotting some combination of noise and lack of any signal.

What has happened is that by defining the galaxy spectrum as data_gal[0], you have extracted the first (bottom) row from the 2D image, which is far away from the actual galaxy light. I would suggest displaying ngc_4697_major_axis.fits in a FITS image display program (such as SAOimage DS9). The spectrum corresponding to the center of the galaxy will be the brightest line running down the middle of the image. (The axes of the image are wavelength in the one direction and distance along the slit in the perpendicular direction.)

Here's an example from the Gemini GMOS instrument webpage. You can see the bright zone running across the middle of the image; this is the center of the galaxy, which gets fainter as you go up or down (i.e., along the slit in either direction):

(Remember that Python and Numpy treat image coordinates as [row_number, column_number] = [y, x], where x and y correspond to the normal coordinates when the image is displayed in SAOimage DS9.)

To extract spectra at different radial distances from the galaxy center, do the same thing, but chose rows (or ranges of rows) above or below the row corresponding to the galaxy center. As you get further away from the center, the S/N will get worse, so you will probably want to start summing or averaging over multiple rows.

Do I have to shift my galaxy spectra for all radii to the rest-wavelength frame, or can I somehow do it all in advance, since the redshift for all radii should be the same.

In general, you do not want to shift the galaxy spectrum (unless perhaps the FCQ algorithm requires it). The redshift of the individual spectra is one of the things you are trying to measure, after all.

The redshift for all radii will almost certainly not be the same, since the redshift at any given radius is the sum of the galaxy's redshift (Hubble flow + peculiar velocity of the galaxy) and the mean rotation velocity of the stars at that radius. Some galaxies ("slow rotators") may have almost no rotation, but NGC 4697 is a "fast rotator", and I believe the rotation velocity will reach $\sim \pm 100$ km/s at a radius of 10 arcsec away from the galaxy nucleus along the major axis.

3
How to remove redshift from galaxy spectra in Python?