Which A. M. Fridman is the author of this paper on gravitational stability?

Is this paper on globular cluster stability still up to date? links to The Stability of Globular Clusters and Spherical Galaxies. by A. M. Fridman of the:

I was curious who the plasma physicist contributing to the field of gravitational stability was. I found:

Alexey Maksimovich Fridman was a Soviet physicist specializing in astrophysics, physics of gravitating systems and plasma physics. He discovered new types of instabilities in gravitating media, created the theory of planetary rings and predicted the existence of small Uranus satellites that were later discovered. He also developed hydrodynamic theory of the spiral structure in galaxies. Fridman worked at the Institute of Astronomy of the Russian Academy of Sciences, INASAN, and was professor of Moscow Institute of Physics and Technology and Moscow State University.

Question: Which A. M. Fridman is the author of this paper on gravitational stability?Is it the Wikipedia linked Alexey Maksimovich Fridman the author of the linked paper?, the one now at Drexel, or someone else?

I'm getting confused because they do look somewhat similar, though photos are from substantially different time periods: 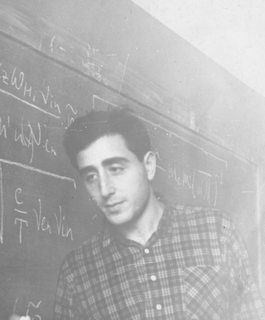 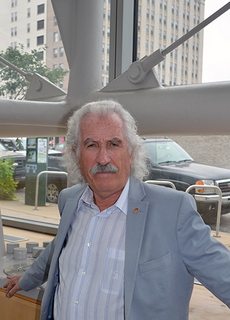 cropped from here and here

It's Alexey Maksimovich Fridman. I think that's pretty clear from the respective research interests of the two scientists, but we can go deeper...

Let's start off with the author of your 1971 paper. A reference search on the Astrophysics Data System for the years 1960-1971 shows that A.M. Fridman's first publication was apparently in 1966: "Rotational Instability of a Gas Disc". This paper shows he was at the Nuclear Physics Institute, Novosibirsk (I'm guessing this is the original name of the Budker Institute of Nuclear Physics), the same institution he's at for the 1971 paper. From the paper titles, we can see that the 1971 paper is not some one-off effort; he was generally interested in the stability of astrophysical systems.

The Wikipedia article for Alexey Maksimovich Fridman notes that he was at the "Institute for Nuclear Physics, Novosibirsk" from 1966 through 1971. (So, same place and same time as A.M. Fridman.) It also notes his clear interest (and publications) in astrophysics.

Now, for Alexander Fridman (the Drexel University professor), I didn't do an exhaustive research-publication search, though it does seems pretty clear his interests do not involve astrophysics. I did find a video interview with him done by his son ("Alexander Fridman: My Dad, the Plasma Physicist") in which he discusses his life and career. Since it's three and a half hours long, I'm afraid I didn't listen to it; but I did skim a transcript. From this, I was able to gather that Alexander Fridman was born in the Ukraine in 1953 and went to university in Moscow, starting in 1970. This would make him about 13 years old (and living in the Ukraine) when A.M. Fridman's first paper was published (when the latter was in Novosibirsk). So... Alexander Fridman is probably not our guy.

Not the answer you're looking for? Browse other questions tagged gravity history star-cluster or ask your own question.

2
Is this paper on globular cluster stability still up to date?

9
Which star did Uranus occult in 1977 when the planet's rings were discovered?
1
Estimating the Rate at which Moon is Moving Away from the Earth
8
Which telescope's model is being shown to Albert Einstein in this file footage? What event might this be?
4
If I could see from a Gravitational-Time dilated place to somewhere far which is not dilated, would I see fast moving people?
10
Can the Earth be used as a gravitational lens?
9
Gravitational waves and gamma ray burst: how were the error bars determined for this speed of gravity calculation? Was $H_0$ used?