Do telescope measurements (in meters, usually) measure in a straight line, from edge to edge, or follow the curve of the mirror?

Somehow, no site or book or magazine has clarified this question for me....

Perhaps I am an idiot, but,

Is the parabolic primary mirror on the new James Webb Space Telescope (JWST) 6.5 meters from edge-to-edge in a straight line? Or do they use an imaginary tape measure to follow the parabolic curve (or hyperbolic, for most modern telescopes) of the primary mirror?

Straight line, though it wont make much difference,

The point about the size is that it tells you about how much light the telescope can gather. This is the "projected-flat" area, not the curved surface area.

However, the difference is not much, as telescope mirrors are not highly curved. I suppose it makes more of a difference when considering radio telescope dishes. 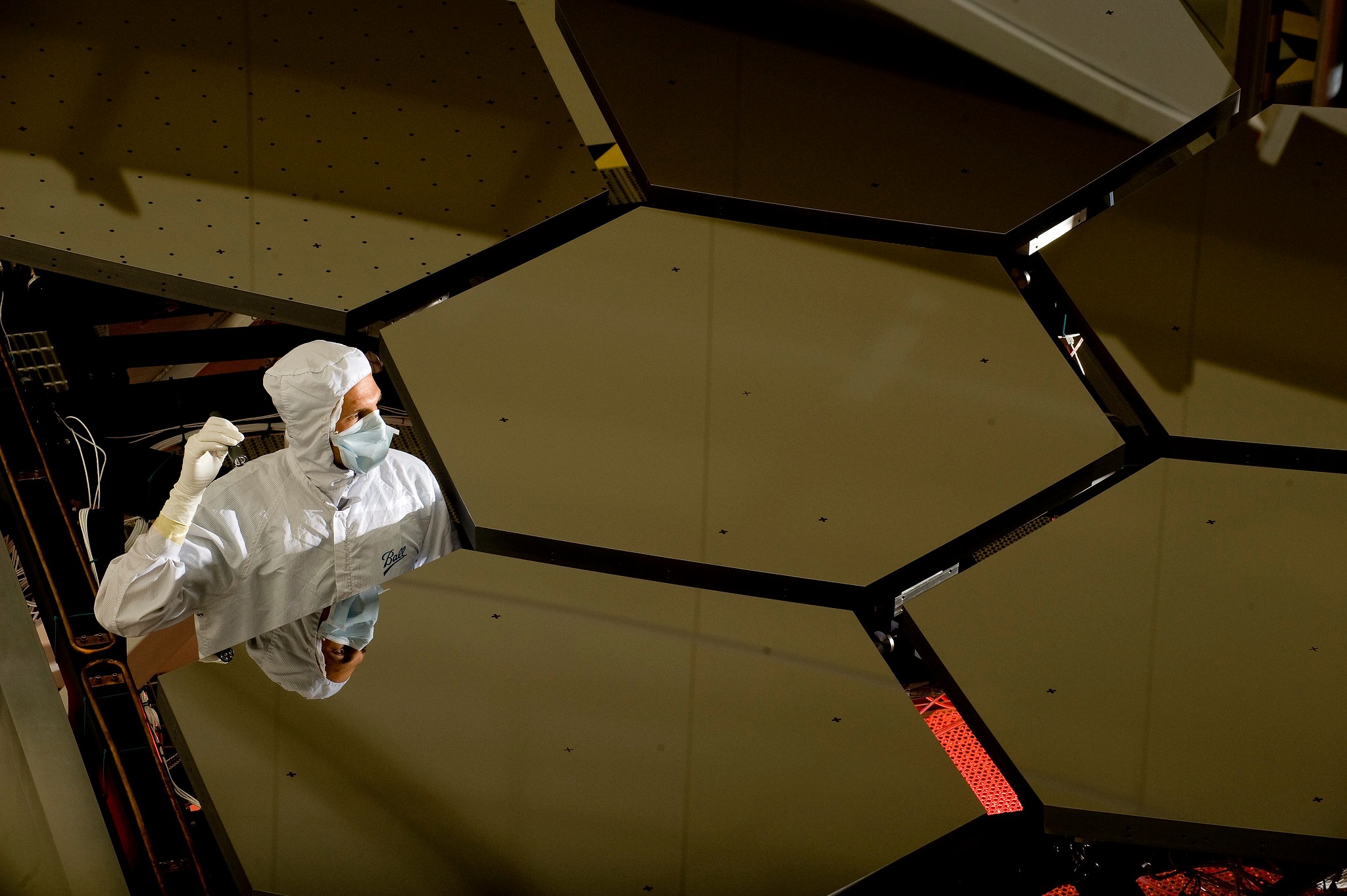 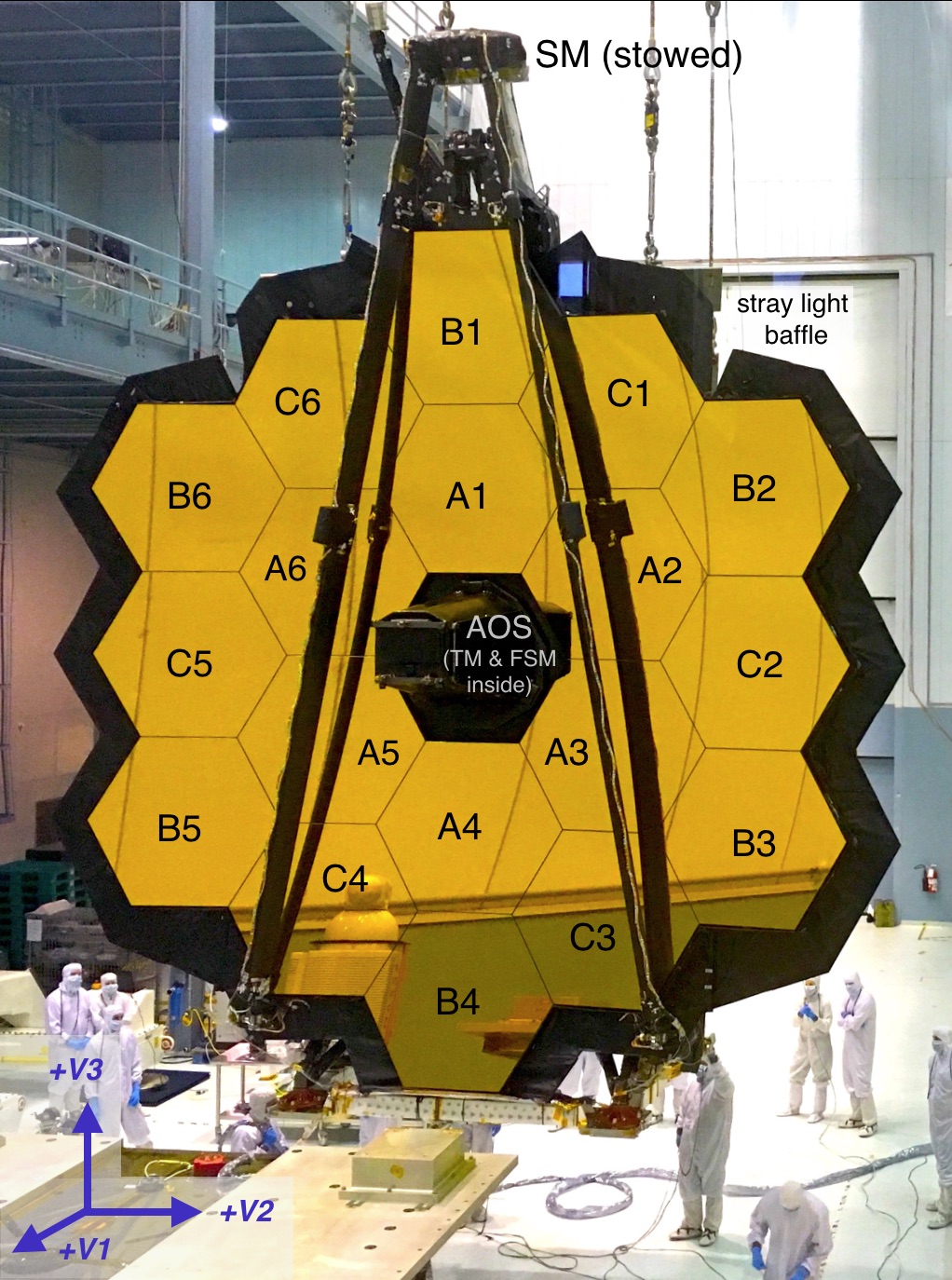 Do telescope measurements (in meters, usually) measure in a straight line, from edge to edge, or follow the curve of the mirror?

The short answer is @JamesK's; it's the straight-line diameter of whatever defines the aperture.

But the JWST primary mirror has no diameter!

Since the OP asked about the JWST mirror which is a whole bunch of separated hexagons and definitely not a circle, I think this needs a more detailed answer, since as @PeterErwin points out the diameter is (primarily) what gives us the angular resolution (and light collection) when not limited by the Earth's atmosphere.

You could come up with an effective diameter as somewhere between the maximum and minimum distance between the center and edge of the last reflecting surface, and that's likely what 6.5 meters is close to.

The primary mirror is comprised of 18 hexagonal segments, each ~1.4 m in diameter, which, when properly phased together, act as a single mirror ~6.5 m in diameter. The individual segments have, on average, better than 25 nm rms surface figure error. The primary mirror serves as the aperture stop for most JWST observing modes, with the exceptions of coronagraphy and aperture masking interferometry (AMI). The unobscured collecting area of the primary mirror is 25.4 m2. (The total polished area is slightly greater, 26.3 m2, but the secondary mirror support struts obscure a small portion.) An opaque border around the outer edge of the primary helps minimize stray light.

The careful wording "act as a single mirror ~6.5 m in diameter" is a good way to get the basic idea across, but a jagged hexagonal outline made from hexagonal segments with gaps in between will have a very different point spread function (the shape of the spot produced by parallel light or a distant star) than that of a circular aperture with the same effective diameter.

Below is from this answer to Why not use only one support vane for the secondary mirror, to avoid multiple diffraction spikes?.

The angular resolution associated with a nice circular diameter of 6.5 meters at 480 nm (the F480M filter in the first figure) is 1.22 $\lambda/D$ or about 0.02 arc seconds, which is that tiny central dot in the first image.

Almost everything else is due to the jagged edge and the gaps between hexagons; the missing center hexagon/central obstruction of the secondary and the three vane also contribute.

Considering that the primary mirror presents much more total "diffracting edge" transverse to the incoming wavefront than the secondary's three vanes, it's possible or even likely that the spider's contribution even with three vanes is small compared to that from the segmenting of the primary.

Let's pretend we have a mirror in the shape of a spherical cap, with dimensions the same as JWST: diameter d=6.5m and radius of curvature r=15.88m. Then the distance along the surface of the mirror between two opposite points on its rim is given by 2r arcsin (d/2r), which comes to about 6.546m. This is only about 0.7% longer than the straight-line distance d.

The mirror is not perfectly spherical, and its circumference is definitely not a circle, but you can see that the choice of measurement makes little difference.

6
Why not use only one support vane for the secondary mirror, to avoid multiple diffraction spikes?

5
Is it possible to steer the sight of a Liquid Mirror Telescope using a plain mirror scheme? If yes, why hasn't it been done?
3
How do I remove fungus from a telescope mirror?
2
What measure should I use to help optimise the design of a telescope in a cubesat?
5
What is equation of straight line for a ideal blackbody on the color color diagram?
1
Why did the famous Multiple Mirror Telescope (MMT) get rid of them and become the Massive Monolithic Telescope?
6
How does the Hubble Space Telescope measure the speed of the wind inside Jupiter's Great Red Spot?
5
Sudden spikes on the light curve of a Quasar from K2 mission
6
Will the James Webb Space Telescope need re-alignment of primary mirror segments?