Ask Question
Asked 2 months ago
Active 1 month ago
Viewed 157 times
-11
$\begingroup$
Closed. This question is off-topic. It is not currently accepting answers.

By analysis of gravity waves GW150914 to S200114f when compared to a ratio from the Black Hole merger of 65 M ☉ at 260 Hz with Betelgeuse frequency of 64.698303 Hz the gravitational release on January 14, 2020 illustrates Betelgeuse's actual total solar mass of about 16.17 M ☉. This fits neatly with a solar mass approximation article from newswise exactly as they say 16.5 to 19 solar masses. Since the information was limited for the gravitational wave of S200114f, does this new found information derived from the Hertz and timings ratios to mass indicate a core collapse of the star Betelgeuse?

Their analysis reported a present-day mass of 16.5 to 19 solar mass--which is slightly lower than the most-recent estimates. The study also revealed how big Betelgeuse is, as well as its distance from Earth. The star's actual size has been a bit of a mystery: earlier studies, for instance, suggested it could be bigger than the orbit of Jupiter. However, the team's results showed Betelgeuse only extends out to two-thirds of that, with a radius 750 times the radius of the sun. Once the physical size of the star is known, it will be possible to determine its distance from Earth. Thus far, the team's results show it is a mere 530 light years from us, or 25 percent closer than previously thought.

Study of supergiant star Betelgeuse unveils the cause of its pulsations Betelgeuse is normally one of the brightest, most recognizable stars of the winter sky, marking the left shoulder of the constellation Orion. 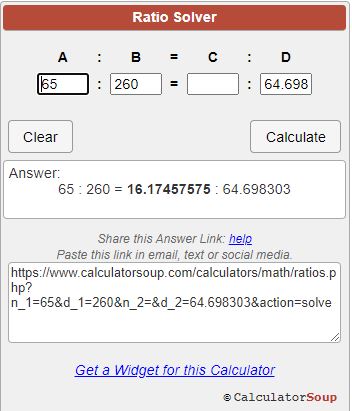 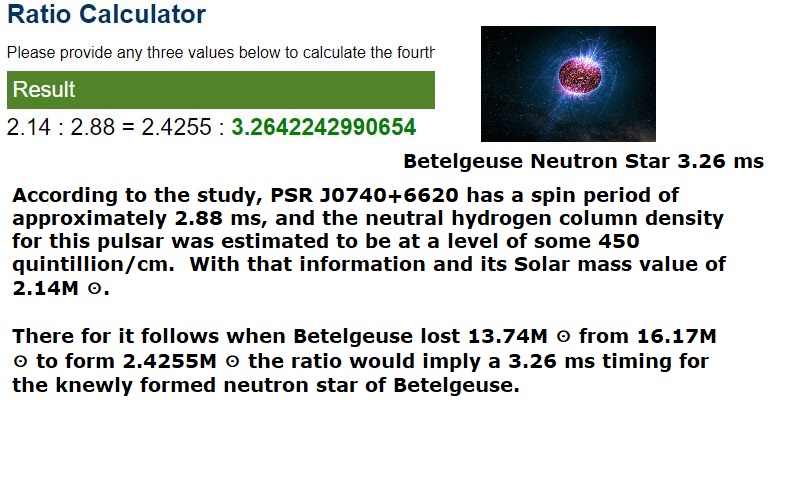 Betelgeuse's Net Solar Mass loss of Betelgeuse is 13.74M ☉ which settled into a Neutron star with a mass of 2.4255M ☉. The following is very important towards black hole theoretical science; moreover what about this 3 solar mass with the ratio? Well it must have been involved with the violent collision of the black holes warping space time contributing to the gravity wave. As the giant black holes collided in the first nanoseconds; I postulate the area field was not yet settled and it was in the process of forming the 65M ☉. Thus a shape at its fraction of second collision was different until it settled, moving forward as the smaller black hole when entering the larger may have had a 3 solar mass oblong shape at the instant it was swallowed by the larger then finally rotating at a speed with its new mass. 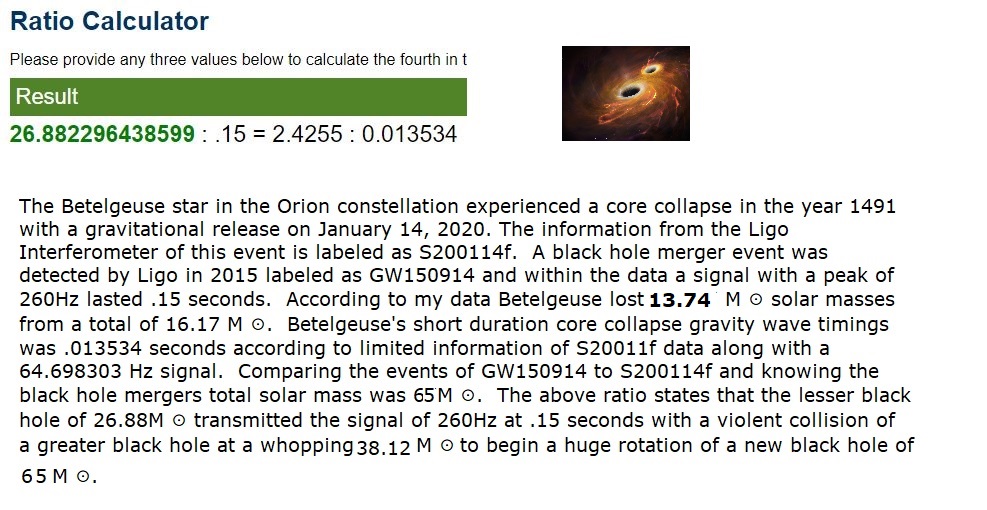 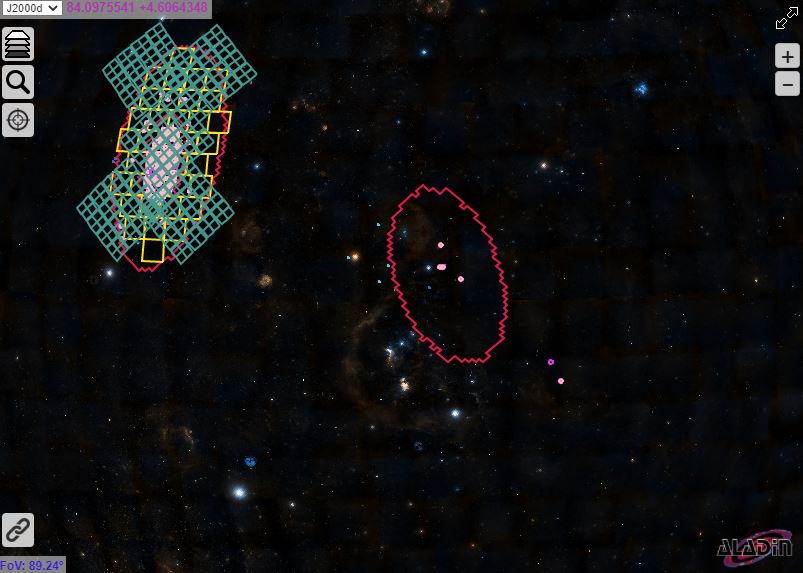 Here is some code which supports a 5.2 light year delay for a visible Betelgeuse Supernova showing up in March of 2025.

No, for several reasons. 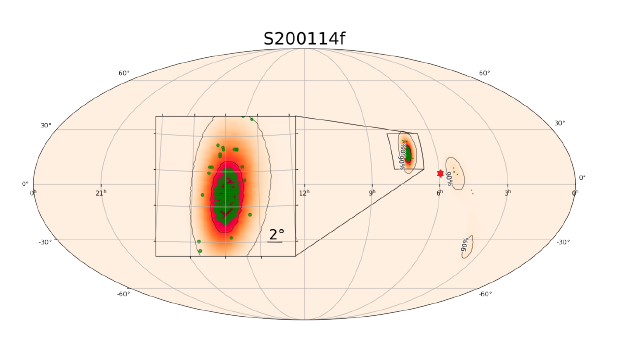 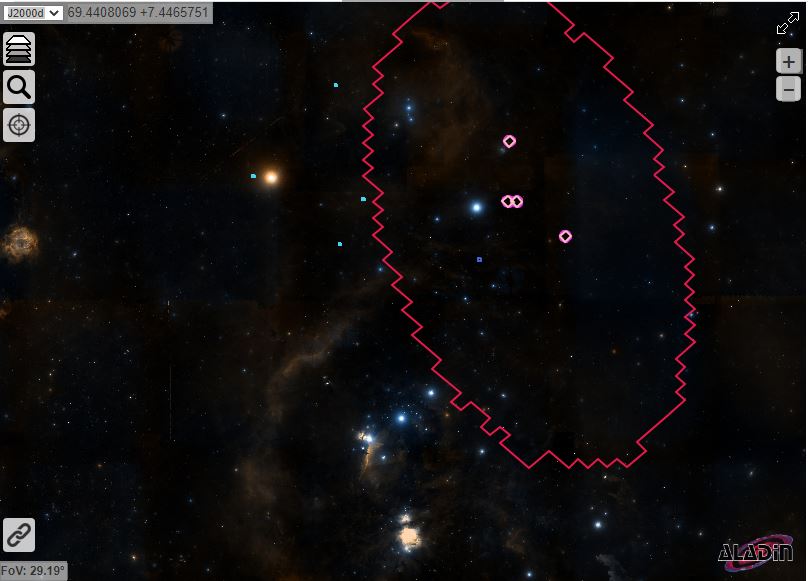 The short burst was part of the problem for Ligo to accurately pinpoint the source of a gravity wave on January 14, 2020 and sourcing gravity wave locations is complicated as I understand. This was their shortest burst ever, indicative of a core collapse, because no black hole mergers nor black hole neutron star mergers fit such a short burst. It looks as though they collected some heading information for an area of the sky without the complete pin point location. My ratio calculation of 16.17M ☉ really predicts it to be a fit for Betelgeuse from the limited information provided here with frequency and burst duration. When compared to the first gravity wave ever detected of 65M ☉ from a black hole merger the details provided were 260Hz and .15 seconds duration for GW150914. Without all the information basically we have an artifact to decode in the sky. A 535 light year accurate distance reading would imply this calculation which fits with orbital decay for light retardation.

My calculation here from python code due to my Gravity Geometric predicts like orbital decay near 1% for difference in speed of gravity to light speed:

That sky chart makes this gravity wave event and Betelgeuse seem to be close together. The actual coordinates should be considered, though.

At their closest, Betelgeuse and S200114F are along a line of similar declination, but 1 hour and 25 minutes apart in Right Ascension. Assuming my calculations are correct, that places them a bit over 21 degrees apart in the sky

Although localization depends on the waveform morphology, approximately 50% of detected signals would be imaged after observing 100–200 deg2 in 2015 and 60–110 deg2 in 2016, although knowledge of the waveform can reduce this to as little as 22 deg2. Unlike many electromagnetic observations, gravitational-wave source position uncertainties are very large, typically larger than 100 deg2. Therefore, gravitational-wave searches produce probability distributions over the sky, rather than single locations, from which meaningful quantities are derived. These probability distributions can have very complicated shapes, including severe fragmentation and spatially separated support. A thorough understanding of these distributions can inform the design of follow-up programs as well as the choice of which events should be pursued. Gravitational-wave source position uncertainties are very large

Not so many people are familiar with Orbital Decay with a light delay, Shapiro Delay with light and Einstein's General Relativity regarding the .12 second delay of light at 1.75 arc seconds. The information I have provided points to a Betelgeuse core collapse. I understand that many people need instant visible evidence yet due to the hard facts that work on the medium of light we will have to wait until the year 2025 to see evidence of Betelgeuse as a Supernova from a gravitational wave on January 14, 2020.

"Empathy, Compassion and Love and if every inhabitant of Earth thought like this at the same time every 24 hours, miracles would happen!" Thomas E. O'Neil

Not the answer you're looking for? Browse other questions tagged gravity astrophysics python ligo or ask your own question.