Is oxygen an alpha element?

Type II (core-collapse) supernovae occur shortly after star formation and enrich a galaxy with $\alpha$ elements such as O, C, NE, Mg, Ca and Si. On the other hand, Type Ia supernovae occur on a more delayed timescale and produce mostly Fe and heavier elements and negligible amounts of $\alpha$ elements. There is great interest in constraining the [$\alpha$/Fe] ratio of galaxies since that tells you something about the rate at which stars formed in the galaxy as a function of cosmic age.

I have usually seen studies rely on measuring abundances of Mg, Si and Ca relative to Fe, but not oxygen. For reference, the Wikipedia page for the alpha process says

As for oxygen, some authors consider it an alpha element, while others do not. Oxygen is surely an alpha element in low-metallicity Population II stars stars. It is produced in Type II supernovas and its enhancement is well correlated with an enhancement of other alpha process elements.

Why would oxygen not be an $\alpha$ element in high-metallicity environments even though it is produced by Type II supernovae?

Do studies prefer [Mg/Fe], [Ca/Fe] and [Si/Fe] as a proxy for [$\alpha$/Fe] instead of [O/Fe] for an astrophysical reason, or just because the spectral features of Mg, Ca and Si are easier to measure than O?

Having said that, my understanding is that most authors treat oxygen as an alpha element and the contribution from AGB stars is not sufficient to stop [O/Fe] behaving very much like [Mg/Fe], [Si/Fe] and [Ca/Fe] in stellar populations (albeit with more noise, because it is difficult to measure). The plot below is from a well-cited paper by Bensby et al. (2014), and clearly shows that [O/Fe] behaves like the other alpha elements, although there is perhaps signs of a continuing decline for [Fe/H]>0 that is weaker in the other alpha elements. 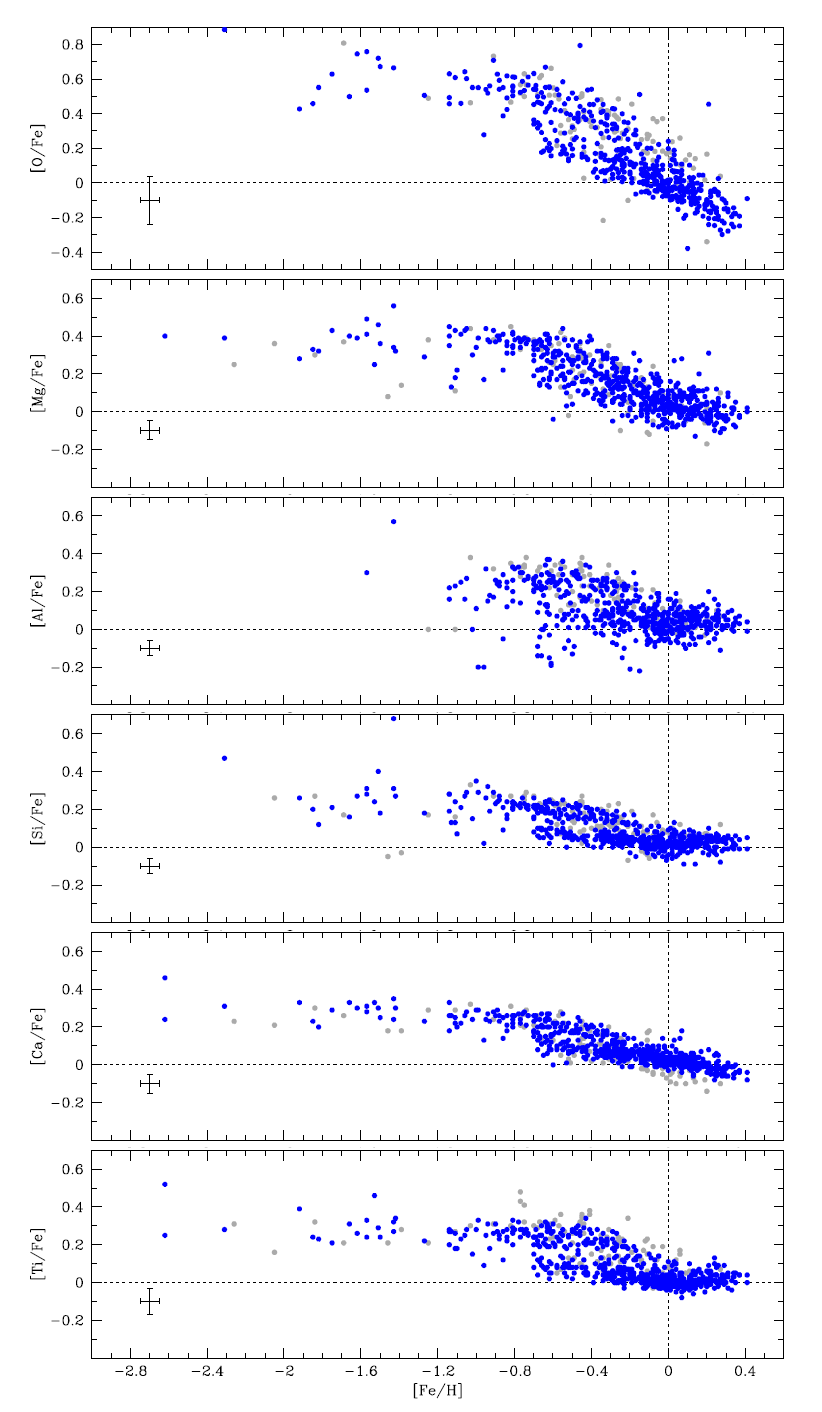 Not the answer you're looking for? Browse other questions tagged galaxy supernova interstellar-medium nucleosynthesis metallicity .

3
How can ionized emission line flux decrease as a function of increasing metallicity or abundance?
2
Relationship between metallicity and color? Should Pop. I stars be blue?
7
Why do type Ia supernovas produce more iron than type II
31
Why don’t supergiants at least start to fuse nickel into even heavier elements before going supernova?
2
Does Alpha Process Produce Bismuth?
1
Why is the carbon/oxygen ratio at low metallicities important to study?
8
Define stellar metallicity