What is the probability of life having developed or going to develop in our solar system another time?

I'm sorry I am not quite sure this question satisfies this point:

Questions that are purely hypothetical, for example a question such as 'Could a black hole destroy the universe' or 'What if our solar system had two suns' (however, feel free to visit World Building)

But actually I am not asking hypothetically. Given the timespan it took to develop life on earth, I wonder if we can project this to life having already developed once or going to develop again in the solar system. I'm referring to the fact that during suns lifespan the habitable zone shifts towards other areas. This won't last only for a few centuries, right? But for millions to billions of years. Some of the planets and other celestial bodies contain the basic elements to host life (as we know it) already. And then there's stuff floating around in the belts that could bombard those bodies.

Researchers studying the crater said investigations by the Mars Science Laboratory have confirmed the presence of an ancient lake that existed in the Gale crater for up to 10 million years, indicating that parts of Mars may once have been habitable for thousands of years.

Just for reference this video got me to the question:

The answer is, it could be non-zero (some would argue it must be non-zero), but since we don't know what the probability of life emerging on Earth was, it is impossible to quantify.

This is why this question is normally turned around - if we find life elsewhere in the Solar System (and it is independently developed), then what is the probability that life can emerge given reasonable circumstances?

The occurrence of a second instance would allow us to put a number on the probability. That number would be high enough that, since the Sun is a fairly ordinary star and that Solar System architectures may also be reasonably frequent, life ought to be common throughout the Galaxy.

There won't be any drastic changes in the habitable zone location for the next few billion years - it slowly moves outwards as the Sun's luminosity increases. Perhaps Mars will warm up a bit and become habitable again? If so, there is certainly the time available (still a couple of billion years before the Sun becomes a red giant and Mars gets much hotter) for primitive lifeforms to develop, given that life on Earth seems to have come into existence very soon (less than a few hundred million years) after the conditions became suitable.

The asteroid belt and outer planets? Much less likely. The habitability or not of the Jovian and Saturnian moons is unlikely to be affected by gradual changes in the solar luminosity during the main sequence and the habitable zone remains well inside the orbit of Jupiter.

Once the Sun does become a red giant, then the habitable zone does move outwards maybe as far the Neptunian moons and Kuiper belt (Stern 2003). There are plenty of icy bodies with organic materials that might have the raw materials to form life. The difficulty here might be the rapidly changing luminosity of the Sun as it approaches the end of it's life. It will not be stable on timescales of billions of years like it is as a main sequence star. Other authors disagree on the exact location of the habitable zone during this phase, probably because of its exact definition and because of difficulties in modelling the final stages of the Sun (see below). Below is a plot from Ramirez & Kaltenegger (2016) showing how the habitable zone (between the solid lines) changes rapidly during the final billion years of the Sun's life. There is a period of about 100 million years when the habitable zone is between 5 and 15 au (i.e. the Jovian moons), and an even briefer period before that when where there could be habitability out to 30 au. 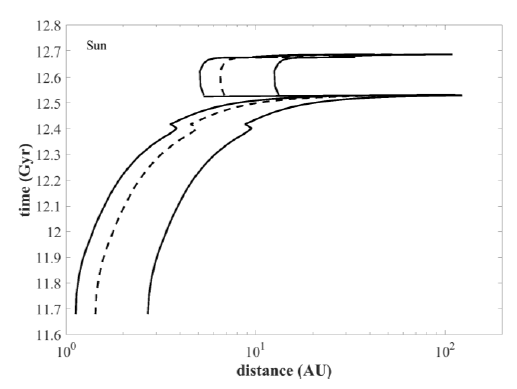 But again, given we don't know exactly how quickly life can develop, although there is an opportunity for life, we can't quantify what the probability is.

Note that all of of the above is uncertain in three ways. First, not everyone agrees on what defines the habitable zone and what temperature range it should encompass. Second, we don't know exactly how the Sun will behave when it becomes a red giant because much depends on the mass-loss rate, for which there is no fundamental theory at present. Third, the behaviour of the atmospheres and albedos of the planetary bodies or moons, which can change, will play an important role. For example, Mars is actually in the habitable zone now, according to simplistic calculations that just use the solar luminosity, and will be for many billions of years. It could just be suitable for life as we find it on Earth (antarctic microbes). On the other hand, if we demand a temperature range of 270K-300K, then Mars may only be habitable for a very brief period in the future (11.6-11.7 billion years from the birth of the Sun, according to Schroder et al. 2001) and this may be insufficient time for life to develop.

Others argue that the probability you are asking about is very close to one. This is the basis of the mediocrity principle which implies that life is common; that there's nothing special about the Earth. Astronomers have detected Earth-like exoplanets orbiting in the habitable zone of other stars.

That completely fuzzy range between nearly zero and nearly one is just life as we know it. This falls into the "known unknown" category. What about life as we don't know it? That's an unknown unknown.

5
Is the discovery of Alien or Extra Terrestrial Life a function of the science of Astronomy?
6
Would a Phobos full impact make Mars temporary habitable?
8
What astronomical observations would give conclusive proof of alien life?
14
If we found evidence of life on Mars, how would we know that it originated on Mars rather than Earth?
5
Trisolar syzygy and it's effects on the planet
3
The Solar System formation
2
Have there been any searches for extraterrestrial life which doesn't require water, oxygen and carbon?