Could dark matter exist in the Universe in the form of sufficiently dense objects?

Albert Sneppen's publication "Divergent Reflections around the Photon Sphere of a Black Hole" provides the math related to the issue which in common language could be described as "how the universe is reflected near black holes".

Black holes are famously compact objects where the paths of light are drastically bent by the curvature of space-time. While light itself cannot escape the central mass at the event horizon, at further distances light may orbit the black hole. This phenomenon may enable a distant observer to see multiple versions of the same object. While this has been known for years, only now do theoretical physicists have an exact mathematical solution developed by Albert Sneppen.

Here is the link to the announcement re the first experimental observation of this phenomenon: https://www.esa.int/ESA_Multimedia/Images/2021/07/XMM-Newton_sees_light_echo_from_behind_a_black_hole

I asked Albert Sneppen the following question: "Could the math you have developed be applied to the analysis of gravitational lensing caused by the dark matter if it exists in Universe in the form of extreme dense clumps which could be considered as 'photon spheres'?"

Here is the answer I have received: "The short answer is yes. The evaluating near the photon-sphere is generally valid. You would not need a black hole, any sufficiently dense object, such as a neutron star or clumped dark matter might have the same mathematical prescription."

So my astronomy stack exchange question is: "could this effect help to find out via optical observations whether dark matter exists in the Universe in the form of sufficiently dense objects?"

The photon sphere of a black hole (BH) is the spherical region of radius 3/2 times the Schwarzschild radius where photons may circle in an (unstable) orbit. Light passing near the photon sphere may be deflected so much as to make a full circle around the BH before escaping. As the light ray come closer, it may make two, or more, circles around the BH before escaping. Thus, in principle you may be able to see the same background object several times, the closer you look to the BH. 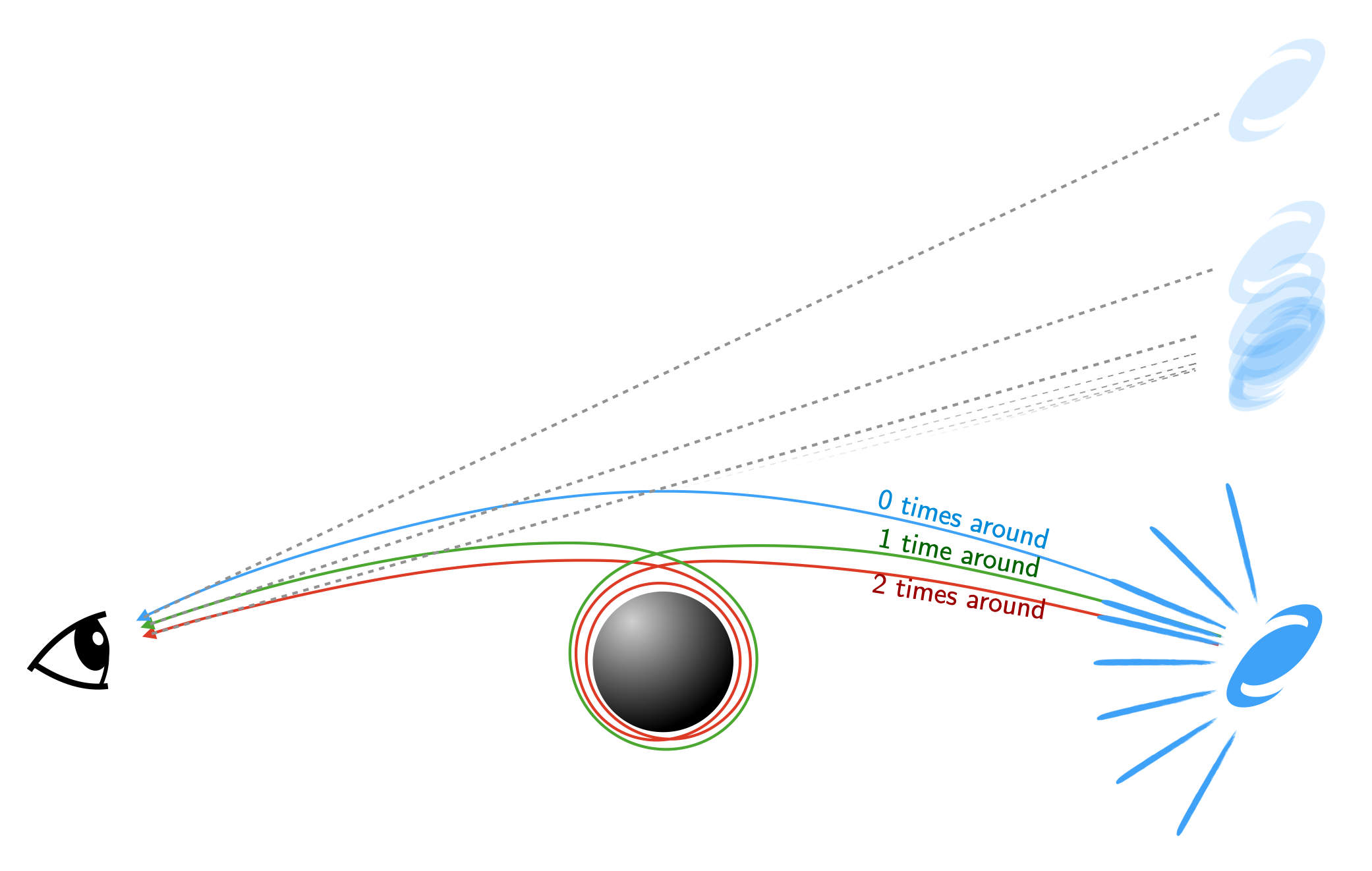 For each extra circle, the factor that you have to go closer to the photon sphere is $e^{2\pi} \sim 500$. In other words, to see the extra image of the background object, you must look very near the photon sphere. While this was known before, the calculations of Sneppen (2021) gives an exact mathematical and physical intuition of the reason behind. Moreover, the result is valid for a non-spinning BH; in the more realistic case of a spinning BH, Sneppen's result can be generalized to show that the factor decreases quite a lot, all the way down to only a factor of two for maximally-spinning BHs.

The existence of a photon sphere is possible only for a BH or, in exotic cases, for an ultracompact neutron star (Nemiroff et al. 1993), in which cases it is inside the star, and is probably not useful for photons, but perhaps for neutrinos.

Creating a black hole out of dark matter is difficult, but in principle not forbidden. The problem is that dark matter is collisionless, so clumping together sufficiently to create a BH would require some sort of direct collapse. However, even if you somehow managed to do this, you wouldn't know whether the BH was created out of dark or baryonic matter, since all information about the former state of the matter is lost (except mass, charge, and angular momentum). "Normal" dark matter halos, even the densest ones, are much too dilute to be even close to having a photon sphere.

So the answer to your question is "No".

Generalizing the solution to large radii

Fig. 4 in the paper shows the relationship between deflection angle $\phi$ and distance $r$ from the photon sphere: 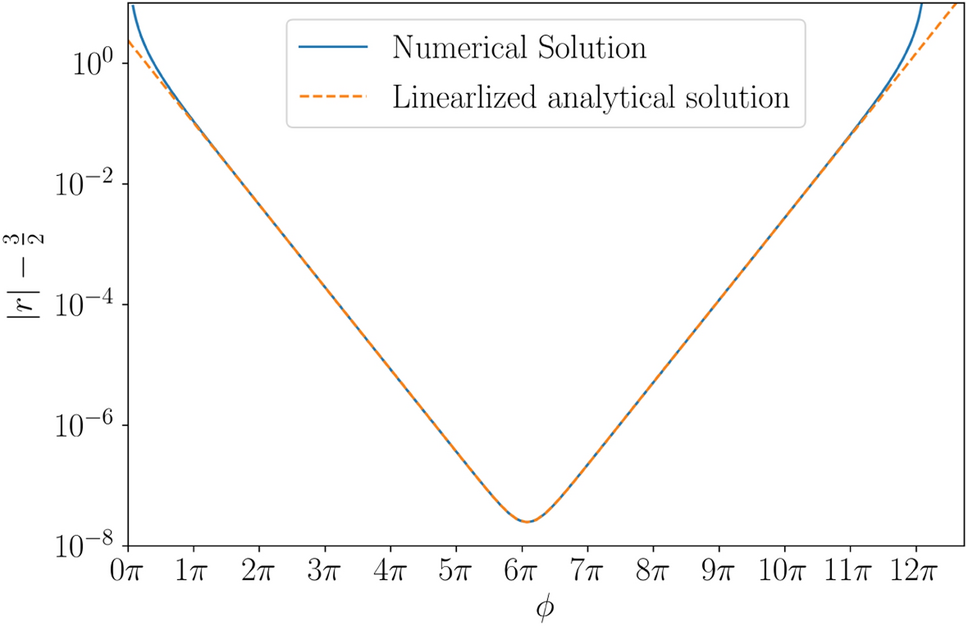 Sneppen's solution (dashed orange) is a linearized approximation which is only valid when you're closer to the photon sphere than roughly 0.3–1 Schwarzschild radii (where it approaches the numerical solution; blue solid). Hence it is neither applicable, nor generalizable (I think), to dark matter halos which are some million times larger than their Schwarzschild radius.

Instead, in this regime you'll be better off using the regular Schwarzschild metric for calculating the deflection angle of a light beam.

Gravitational lensing has been used to look for and rule out massive compact objects (MACHOS) as the source of dark matter in our galaxy. The headline result is that MACHOS in the range $6\times 10^{-8} < M/M_\odot <15$ were ruled out (Tisserand et al. 2008).

I don't see any plausible reason why the dark matter responsible (in aggregate) for the large scale gravitational lensing in galaxy clusters should be any different. The extreme lensing effects caused by black holes only occur for light travelling very close to the "photon sphere", and thus affects only a tiny fraction of light traversing a massive cluster of galaxies.

Secondly, whilst the dark matter could be primordial black holes (with masses outside the range quoted above), it cannot be in the form of neutron stars, white dwarfs, or black holes formed as a result of stellar evolution. This is "baryonic" dark matter and about 80% of the dark matter needs to be in a non-baryonic form.

10
Why aren't brown dwarfs the dark matter?
6
How is dark matter different from ordinary (visible) matter?
6
Can dark matter be normal matter after all?
8
How well conserved is etendue in extreme gravitational lensing scenarios?